He was a fiery resistor of conformity who had impish good looks and bad boy appeal. He also had the charm of a Casanova with both his spoken and written words. Ladies were smitten by his voice and fathers were outraged by his antics. No matter what he did right, it was always wrong. His name was Shelley. Percy Bysshe Shelley, the poet, the wordsmith, the legend and a cornerstone of the English Romantic poetry movement of the early 1800's.

Born with a silver spoon in his mouth but prepared to walk away and waive his rights to privilege. Percy Bysshe Shelley paid a high price for his principles. The path for Percy would be one of pain, passion, pathos, and provocative poetry. His publishers often balked at the sight of a Shelley manuscript for fear of being locked up for sedition or blasphemy, if they dared to print.

Controversy was a stone to be turned and dogma a faith to be broken. He was expelled from Oxford University for writing a pamphlet entitled "The Necessity of Atheism". Then Shelley cut himself off from his affluent family after refusing his fathers ultimatum to disavow his heretical atheist views and return to Oxford. There was never a dull day for the poet nicknamed "Mad Shelley".

His cousin Thomas Medwin once summed him up with the words: "Insanity hung as by a hair suspended over the head of Shelley". It may be easy to say in retrospect but, Percy Bysshe Shelley was neither mad nor bad. Medwin was also his biographer, he wanted to sell books. Shelley could easily be called a radical or a subversive and few could argue against this. They are common traits shared by many 21st century students. His penchant for free thought and free love is another commonality of the spirited young and scholarly classes these days.

When Percy Bysshe Shelley left this earth before his time at the young age of 29, the irony of the saying "only the good die young" would have been completely lost on a society that shunned his beliefs and were outraged by his lifestyle.

This was a man that supported all sentient beings. Shelley opined vegetarianism and was once quoted as saying: "Never again may blood of bird or beast, Stain with its venomous stream a human feast". He went on to say: "It is only by softening and disguising dead flesh by culinary preparation that it is rendered susceptible of mastication or digestion, and that the sight of its bloody juices and raw horror does not excite intolerable loathing and disgust".

It was left to the poets, philosophers and free thinkers of subsequent generations to keep his spirit and the meaning of his works alive. His legacy is a who's who list of latter day literary giants, statesmen and political theorists who all drew inspiration from what was in his day deemed radical idealism.

So how did Percy Bysshe Shelley become such an influential poet?

Some speculate that the soul of the successful poet is forged in the misery of sorrow. Well Shelley certainly suffered his fair share of heartache. His first wife, Harriet Westbrook, whom he eloped with in 1811 when she was sweet sixteen, committed suicide on 10th December 1816. Before Auld Lang Syne was sung welcoming in 1817 Percy was married again. The pregnant Mary Godwin was his bride. But tragedy was waiting in the wings. The newlyweds lost their two year old daughter Clara to dysentery in 1818, then one year later their three year old son William died after suffering from malaria.

Shelley was also embroiled in a custody battle for his children by his deceased wife Harriet. He lost. Lord Eldon was the judge, he accused Percy of abandoning a heavily pregnant Harriet for Mary. Lord Eldon raked over his outspoken beliefs and his professed atheism. He went on to question his conduct as highly immoral and in a landmark case for the day, the judge ruled against the rights of the father to raise his children. This ruling was a bombshell. Never before had a father, of aristocratic stock, lost a custody battle to a family of what was considered lesser breeding.

Then there was Shelley's unpopularity with the English establishment. His outspoken beliefs raised his head above the proverbial parapet on numerous occasions. The press, in their pet poodle establishment capacity, were only too willing to set their sights on Percy the poet and from their ivory tower of vilification went into moral outrage overdrive.

If being judged, condemned and ridiculed were not enough there were also creditors hounding Shelley for their pound of Sterling. It is little wonder that he slipped out of England in 1816 seeking pastures new. Italy was the greener grass he desired. His greatest masterpiece in verse yet to stain ink on paper.

Before the seemingly persistent pain of perceived injustice had combined with tragic circumstance and his principled idealism to take their toll, the pen of Percy the poet was already fluid in verse and view. Despite his short path to 29 years being drenched in everything from bullying at school to misunderstood umbrage in youth and tragic repercussions in adulthood, Shelley had already shown a talent for the written word.

It was with pamphlets and novels in his youth where he first cut his literary teeth. In 1810 Percy wrote a popular gothic novel called "Zastrozzi". Shelley then ventured further into the essence of gothic fiction with "The Rosicrucian: A Romance" in 1811. He was a colourful and inventive wordsmith. But he lacked the perspective of pain or the wisdom of old age to hone his literary inventiveness.

Shelley's first venture into the serious business of poetry was in 1813 when he published a utopian allegory called "Queen Mab". This was a philosophical poem that whet the lips of his theory of revolution. Percy did not believe in revolution by force. He believed that poetry could inspire nature's evolution which would become reality through the virtuous actions of a society illuminated.

In 1818 Shelley penned one of the most famous sonnets in English literature: "Ozymandias". In 14 short lines he summed up the hubris of the Pharaoh (Ramesses II) and the transient nature of power. This sonnet has become a metaphor for the ephemeral characteristics of political power.

Shelley was inspired to write in 1819 a poem that has been described by political historians as "the greatest political poem ever written in English". The poem is called "The Masque of Anarchy". The incident that caused such indignation to flow through the pen of Percy was the Peterloo Massacre that occurred on 10th August 1819. It was a peaceful protest that the authorities put down with brutal force resulting in 15 deaths and in excess of 400 injured.

"The Masque Of Anarchy" illustrated Shelley's idea of non-violent protest. Mahatma Gandhi often recited lines from "The Masque Of Anarchy" during his speeches. The line: "Ye are many-they are few" has been the go-to slogan for political demonstrators across the globe. The poem was recited at the Tiananmen Square protests of 1989 and by the Tahrir Square demonstrators during the 2011 Egyptian revolution.

1819 was a productive year. Percy wrote another classic called "The Cenci". His wife Mary was impressed to describe "The Cenci" thus: "The Fifth Act is a masterpiece. It is the finest thing he ever wrote, and may claim proud comparison not only with any contemporary, but preceding, poet".

Mary Shelley was an accomplished author in her own right so she had the literary credentials to back up this bold statement. She was the author of the best selling novel "Frankenstein". The idea for her novel came during a weekend of literary brain storming horror stories with her husband and Lord Byron whilst staying at Lake Geneva in Switzerland.

His time in Italy had produced a rich vein of inventive poetry. The Shelley ceiling of excellence was rising. Then he published "Prometheus Unbound" in 1820. This was a poetic revelation, even by the standards of Percy Bysshe Shelley. "Prometheus Unbound" looked back through history but posited a lesson for the ages and beyond.

Love, painful understanding and forgiveness were the foundation for a poetic political allegory that explored the transitional justice of time over tyranny. The reference to the despotism of Jupiter was an echo to the ages. It was as true to Jupiter and Prometheus as it was to the Pharaohs, the Roman Empire, Napoleon or Hitler. Suddenly the words of a poet reflected past, present and future. Shelley succeeded in writing for eternity.

It is uncertain whether he peaked as a poet. The sands of time had decided his fate. In 1822 he set sail from Livorno to Lerici. His boat The Don Juan, which was named after his good friend and poet Lord Byron, succumbed to a storm. Shelley may have mastered the words of odes and verse but he was ill equipped to captain a vessel in a storm. Poor seamanship cost him and his crew of two their lives. Shelley belied advice to drop sails in the eye of a storm and the Don Juan was buffeted down to Davy Jones locker.

Percy Bysshe Shelley channeled his poetry through the conduits of hope, love and his imaginative desire for a better more equitable world for all. The world was not ready for the change that Shelley had long coveted. This was the man who shared this wisdom: "Titles are tinsel, power a corrupter, glory a bubble, and excessive wealth, a libel on its possessor". But upon his death a London newspaper could only muster a mocking obituary: "Shelley, the writer of some infidel poetry, has been drowned: now he knows whether there is a God or no."

England, Italy and the world had not just lost a poet. They had lost a genius of rhyme whose seductive verse elevated the English romantic movement past what Wordsworth or Coleridge could ever have conceived.

Bertrand Russell was moved to say: "Shelley appealed to me from his hatred of tyranny. And also from his very vivid sense of beauty, natural beauty, and every kind of beauty. And I thought he sort of portrayed a lovely world of the imagination"

George Bernard Shaw said this mouth watering quote about him: "I was a cannibal for twenty five years. For the rest I have been a vegetarian. It was Shelley who first opened my eyes to the savagery of my diet"

The literary critic Harold Bloom made this observation: "Lucretius and his tradition taught Shelley that freedom came from understanding causation"

Lord Byron spoke of his friend Shelley as only he would: "I never met a man who wasn't a beast in comparison to him"

John Keats when discussing poetry with Shelley shared this thought: "You might curb your magnanimity, and be more of an artist, and load every rift of your subject with ore"

In reference to Shelley's poem 'The Masque of Anarchy' Mahatma Gandhi once stated that there was: "nothing new to teach the world because truth and nonviolence are as old as the hills"

Karl Marx made this comparison: "The real difference between Byron and Shelley is this; those who understand and love them rejoice that Byron died at thirty-six, because if he had lived he would have become a reactionary bourgeois; they grieve that Shelley died at twenty-nine, because he was essentially a revolutionist and he would always have been one of the advanced guard of socialism"

Frederich Engels described him thus: "Shelley, the genius, the prophet, finds most of [his] readers in the proletariat; the bourgeouise own the castrated editions, the family editions cut down in accordance with the hypocritical morality of today" 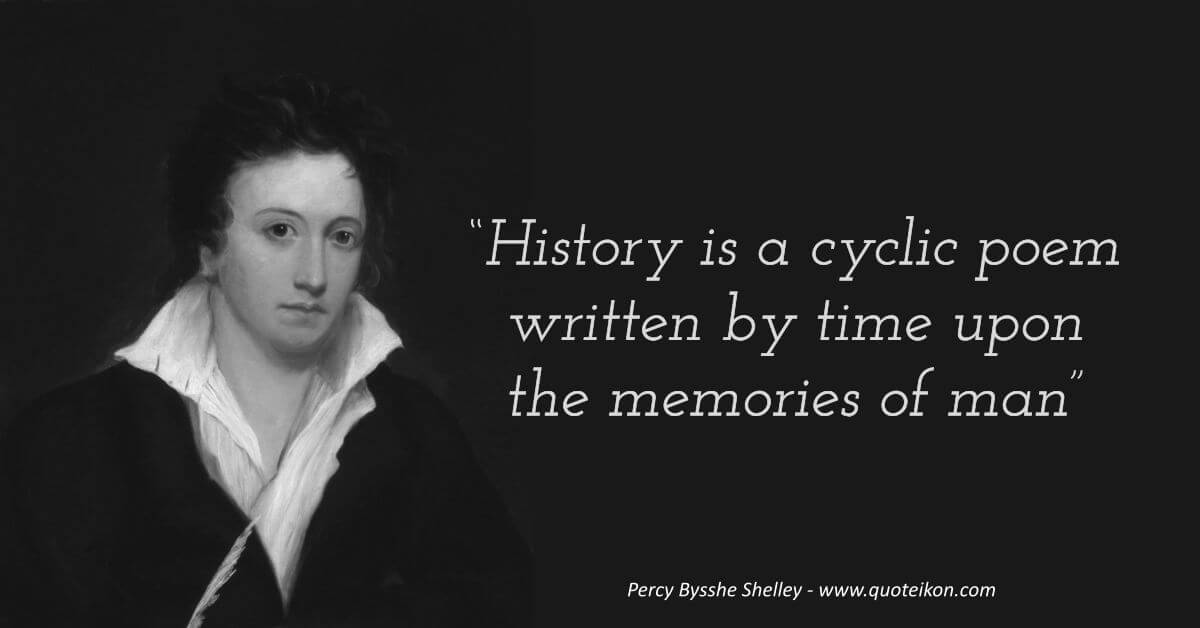 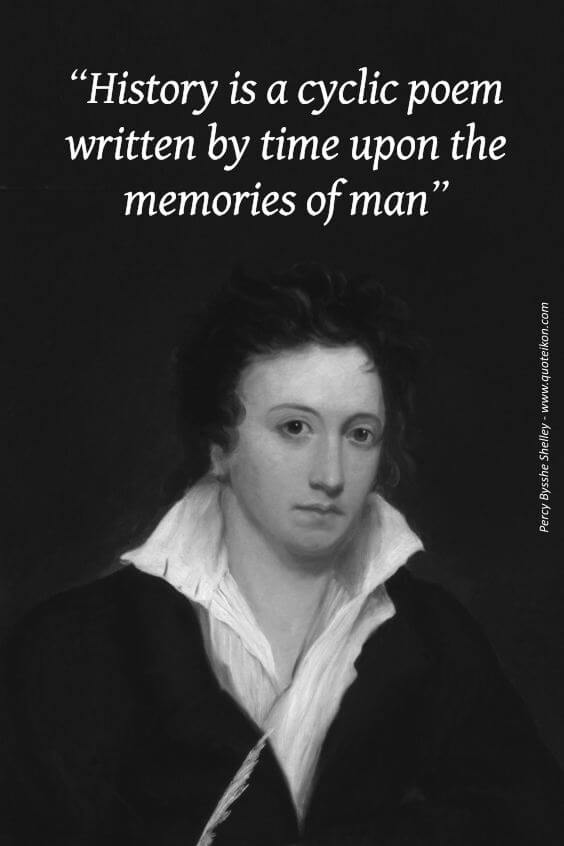