Edgar Allan Poe was the gothic story teller and master of the macabre whose dark tales of terror sent a shiver down the spine of many an unwary reader. His poignant poetry is what he is most remembered for as he traversed the gates of heaven and hell in the mindful "Ulalume" and "Lenore" whilst his most famous poem "The Raven" which in 1845 was inspired by the author Charles Dickens was the spark that gave him the worldwide recognition his talent truly deserved.

Orphaned at 3 years old Poe was fostered but not legally adopted and although his guardians John Allan and his wife, Frances, gave him a good early education their support for him dwindled and he was financially forced to drop out of university. He spent some time in the army before embarking on his literary career by taking jobs editing journals and giving rasping reviews as a literary critic.

Somewhat unusually for an American author he became more popular in Europe than in the U.S. and this was largely due to the French poet and author Charles Baudelaire who translated Poe's work which proved highly successful and inspirational to the literary appreciative French audience and beyond.

Whilst Poe is considered to be the forerunner of the detective story and pre-cursor to the science fiction genre, it is as the harbinger of horror tales that most people associate his work with. As the master of morbidity it seems fitting that the Baltimore Ravens NFL team based their name on his famous poem "The Raven", and popular culture often depicts Poe as a tortured soul or the tormented artist putting his demons to the sword by the power of the pen.

He was the original "man in black" who posthumously could derail a train with a one liner when the words "Hic Tandem Felicis Conduntur Reliquae. Edgar Allan Poe, Obiit Oct. VII 1849", had just been carved into his pending gravestone in a quarry only for it to be smashed to smithereens by a wayward locomotive. Ghost trains apart, he really was good for a quip or two so here is my compilation of 20 of the best Edgar Allan Poe quotes

The acclaimed English author D.H. Lawrence spoke insightfully of him: "He was an adventurer into the vaults and cellars and horrible underground passages of the human soul. He sounded the horror and the warning of his own doom"

The author James Grover Thurber remarked about his fondness of liquid refreshment: "Poe...was perhaps the first great nonstop literary drinker of the American nineteenth century. He made the indulgences of Coleridge and De Quincey seem like a bit of mischief in the kitchen with the cooking sherry" 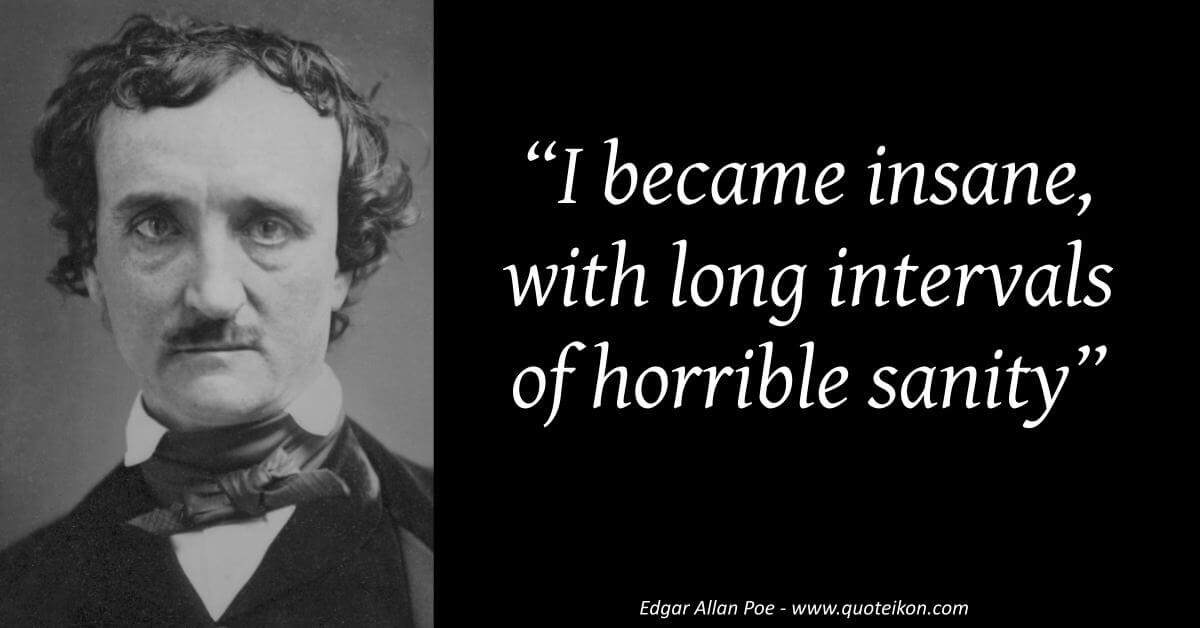