On the 22nd April 1882 a curious visitor, dressed like a dandy, strode into the Kansas State Penitentiary at Lansing. Two days later, after giving his lecture in Lincoln he visited the State Penitentiary Nebraska. The visitor was an impeccably dressed Irishman called Oscar Wilde. He described the inmates as "odd types of humanity" and went on to call them "all mean looking".

The following day Wilde, who was travelling through the U.S. on a lucrative lecture tour, wrote a letter sharing his penal observations to his friend the suffragette Helena Sickert. He was somewhat fixated on cell detail and seemed gleefully surprised to say: "In one I found a translation of Dante, and a Shelley. Strange and beautiful it seemed to me that the sorrow of a single Florentine in exile should, hundreds of years afterwards, lighten the sorrow of some common prisoner in a modern gaol."

Fast forward fourteen years and the same book by Dante would prove a mental lifeline for Wilde as he was half way through his own prison sentence of two years hard labour. Oscar was doing time in Reading Gaol when his friend the MP and reformer Richard B. Haldane managed to convince the governor to allow him access to books and writing materials.

Oh how the mighty had fallen. Oscar Wilde was a man before his time. In classic British tradition he was lauded for his literary brilliance, built up and summarily brought crashing down to earth in the most public humiliation possible.

His downfall came after an ill thought out libel prosecution of the Marquess of Queensbury which resulted in evidence of Oscar Wilde's homosexuality being discovered. Indeed, many close friends and associates advised Oscar not to proceed with the libel case. Before the trial he lunched with George Bernard Shaw who pleaded with him to withdraw the case.

The eloquent pen of Oscar Wilde may have delighted us with a wealth of witticisms but the poor judgement he showed by persisting with the libel case questioned his ability to imagine a final scene where the tables had turned.

In 1895 it was a crime to commit any act of gross indecency. This all encompassing statute meant that engaging in any form of sexual activity with a member of the same sex was subject to criminal prosecution.

The Marquess of Queensbury was unhappy with the relationship Oscar had with his son Lord Alfred Douglas. The Marquess accused Wilde of being a sodomite. The ego of Oscar replied with a lawsuit. But the evidence of a succession of young male prostitutes sealed his fate.

This forced Oscar to drop the libel prosecution. Wilde's destiny was an ignominious retreat from the Old Bailey witness stand to the dock for trial. The guilty verdict was inevitable. The tabloids and the broadsheets had a field day.

The headlines screamed of indignation as they indulged in a scandal that was revelled in by a society too quick to judge and too swift to grudge.

The Daily Telegraph rode its high horse of righteous outrage as they wallowed in his fall from grace: "We have had enough of Oscar Wilde. He has been the means of inflicting ... as much moral damage of the most hideous and repulsive kind as no single individual could well cause".

It was a far cry from his heyday in the early 1890's when he published books and poems and wrote plays that are still appreciated in the 21st century.

This was the man who even before his trial courted controversy with his risque writing. This was the man who published his only novel, "The Picture of Dorian Gray", that received rave reviews whilst it was also condemned as obscene in equal measure. It's publication avoided the wrath of the censor by a whisker. But the prosecution in his 1895 trial delighted in questioning its contents with Wilde squirming on the stand.

In 1892 "Lady Windermere's Fan" opened at the St James's Theatre in London where it was well received. After the third act, on opening night, the theatregoers called for the author and the ego of Oscar obliged by indulging in a speech congratulating the audience on their impeccable taste in liking his play.

1895 was a rollercoaster for Oscar. His writing hit the giddy heights of theatrical masterpieces with "An Ideal Husband" and "The Importance of Being Earnest" garnering much critical acclaim.

George Bernard Shaw gave a glowing report on An Ideal Husband when he enthused: "Mr. Wilde is to me our only thorough Playwright. He plays with everything; with wit, with philosophy, with drama, with actors and audience, with the whole theatre".

The reviews for The Importance Of Being Earnest were equally impressive with the author H. G. Wells commenting: "More humorous dealing with theatrical conventions it would be difficult to imagine". Whilst the poet W.H.Auden described it as: "pure verbal Opera".

It was a crescendo of praise that gave an inflated feeling of pride to the author. Oscar Wilde hardly needed encouragement to wax lyrical on any subject. With the endorphins of success pumping through his veins he must have felt invincible. This was to be his achilles heel.

From a young age Oscar Wilde was a confident boy. He breezed through his studies at Trinity College, Dublin and Magdalen College, Oxford. He had a presence of self assuredness and a razor sharp mind that elevated his flamboyant character higher up the ladder of social prominence than any college graduate could ever hope for.

Oscar espoused the ideals of aestheticism which he lived out in his attire, art, wit and writing. He was the darling of social gatherings whose imaginative outlook on life made him a raconteur beyond compare.

Dipping into the cult of personality had opened many doors for Oscar who would later openly admit: "I put all my genius into my life, I put only my talent into my books". His sharp wit got him employment as a critic. It also got the attention of writers eager to tap into his presence.

The 1881 opera "Patience" by Gilbert and Sullivan had a lead character called Bunthorne whose on stage attire drew critical comparisons to the flamboyant wardrobe of Oscar Wilde. Oscar was most pleased with the added attention and adulation. He used this as a springboard to export his genial wit to the lecture circuit of the U.S.A.

On Christmas eve 1881 Oscar Boarded the S.S. Arizona destined for New York. The purpose of his tour was to lecture on art and literature and promote the aesthetic movement's appreciation of beauty especially in the arts.

His heralded arrival in New York brought the press out in droves and it was his passage through customs that the legend of an oft repeated Wilde quote was borne when he was alleged to have said: "I have nothing to declare except my genius". However there is no actual evidence to confirm he did utter these now seemingly immortal words.

His U.S. tour was initially planned for three months but proved so successful it was extended to ten months. Once back on the shores of Blighty, Oscar embarked on a British tour sharing his impressions of America and his views on aestheticism. From 1883 to 1888 he conducted in excess of 250 lectures on said subjects.

He was welcomed with open arms and open minds into the salons of Paris and no London party was complete without the presence of Oscar sharing his Wilde witticisms for all and sundry.

By the end of the 1880's Oscar Wilde was an established celebrity in his own right. His dramatic output of the 1890's gave literary substance to his undoubted oral talents.

By the mid 1890's Oscar had the whole world at his feet. The applause of approval was intoxicating. Success blurs the mind. It is difficult to focus on lessons from the history of the world when you are riding the crest of a wave.

From Samuel to Shakespeare to Shelley their words of warning were a message to mankind. Samuel spoke of "how the mighty have fallen" whilst Shelley's "Ozymandias" was a poem for all eternity that focussed on the hubris of man. But never was the Shakespeare phrase "pride before a fall" more befitting than to Oscar Wilde.

Oscar Wilde was the dandy who went to trial in denial about his closet full of deceit. He became the broken man who emerged from prison two years later embittered at the loss of his family, his fortune, his health and his reputation.

His time in Reading Gaol took its toll and warped his literary soul. One year into his sentence Oscar was allowed the privilege of writing materials. Twelve months of deep reflection had lobotomised the jocularity of jibes flowing through the pen of Wilde. Gone were the acerbic axioms to be replaced by the passionate pathos of "De Profundis".

"De Profundis" displayed the poignancy of the penitent prisoner where Wilde purged his soul in a confessional letter to his former lover Lord Alfred Douglas. It revealed a heart torn asunder. Oscar bared all the complexities of his mind in a tone of seduction feeding off an undercurrent of pain and promiscuity.

He never recovered from his prison ordeal and died in poverty in Paris three years after his release. Post prison, his only literary outpouring came with his poem: "The Ballad Of Reading Gaol" which described the hanging of a fellow prisoner Charles Thomas Wooldridge on 7th July 1896.

The first six prints of "The Ballad Of Reading Gaol" sold well and were signed by an author known only as C.3.3. which was Oscar's home for his prison sentence: cell block C, landing 3, cell 3. Later editions were signed by Oscar himself and they provided a small income for the writer in his impoverished twilight years.

Oscar Wilde was born over a century before his time. In the late 20th and early 21st century no one could care less about a persons sexual orientation, all that would matter was if the person had talent or not.

He was famous for his Wilde witticisms and infamous for his trial that scandalised late Victorian London. Oscar was tabloid gold who came out with one liners that editors would drool over.

The irony of literary prophecy can come back to haunt an author. Such was the inference of one line from the play "An Ideal Husband" which read: "Sooner or later, we shall all have to pay for what we do". Indeed we do, if only Oscar Wilde could have heeded his own advice and dropped the libel case.

When he spoke, we listened, we laughed and we cried. So in appreciation of this literary giant this is my compilation of 25 of the of best Oscar Wilde quotes.

The playwright George Bernard Shaw spoke of his tragic downfall: "His fierce Irish pride had something to do with his refusal to run away from the trial.... Wilde was so in love with style that he never realized the danger of biting off more than he could chew: in other words, of putting up more style than his matter would carry. Wise kings wear shabby clothes, and leave the gold lace to the drum major"

The novelist James Joyce hinted at a wasted talent: "In the tradition of the Irish writers of comedy that runs from the days of Sheridan and Goldsmith to Bernard Shaw, Wilde became, like them, court jester to the English"

The poet William Butler Yeats opined his anecdotist qualities: "The dinner table was Wilde's event and made him the greatest talker of his time"

The poet Wystan Hugh Auden made this observation: "From the beginning Wilde performed his life and continued to do so even after fate had taken the plot out of his hands"

The parodist Max Beerbohm described him thus: "An Assyrian wax statue, effeminate, but with the vitality of twenty men" 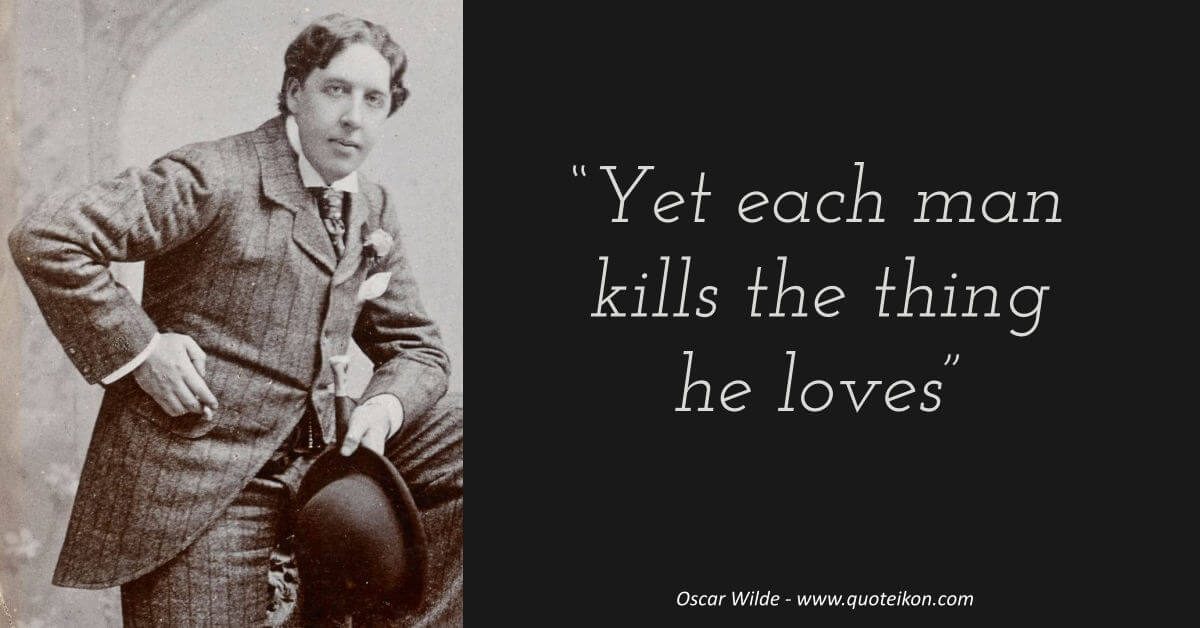