Amidst the upheaval of the French Revolution there were many opportunities for ambitious military and political leaders. Rising up through the ranks of the military there was one passionate French patriot who caught the heart of a nation and went on to dominate European affairs of state in the early 1800's. His name was Napoléon Bonaparte, the military and political genius who reshaped Europe at the turn of the nineteenth century.

Taking advantage of the post revolution turmoil, Napoléon progressed rapidly through the chain of command and became a general at the relatively young age of 24. He was given the command of the army of Italy where he put down an insurgency and defeated the Austrians in his first military campaign. Further great military victories ensued culminating in the the Battle of Austerlitz where he defeated both the Russians and the Austrians which led to the decline of the Holy Roman Empire that had reigned for a millennia.

There were many that viewed him as a warmongering and cruel despot. But there was far more to Napoleon Bonaparte than his battlefield brilliance. In 1804 he introduced the Napoleonic Code. This was a licence for meritocracy whereby all privilege by birth was removed and only the best qualified person could obtain government jobs. It also allowed freedom of religion although Catholicism still remained the state religion.

His Napoleonic Code was adopted across the globe as the most efficient public administrational tool created since the time of the Roman Empire. With meritocracy at its core, this code also introduced a swathe of ideas that supported civil law including: equality before the law, property rights, religious toleration, higher education that was secular and a fairer tax system.

Napoleon brought the feel good factor back to French people. France was country in fiscal disarray and suffering with social unrest. His domestic policies were responsible for improving the education system, roads, the water supply and sewer systems. He gave encouragement to the arts, literature and science. His legal reforms ended the monopoly of rural feudal systems and his modernisation programme introduced highly popular liberal reforms.

Undoubtedly he was a great institution-builder. But Napoleon Bonaparte was also a man of action. As an empire builder he gave France an identity it had been searching for since the French revolution.

He picked up the Gallic gauntlet and drove France to become the dominant power in Europe. He was a slayer of dynasties that shattered the old ruling order of continental Europe.

No ruler since the days of Charlemagne had glorified military achievements more than Napoleon. But his ambitions drove him to go too far. He had a major setback against the British at the Battle Of Trafalgar in 1805 and his invasion of Russia in 1812 was a disaster that saw his army decimated. The Napoleonic wars rumbled on and despite defeat in 1813 at the battle of Leipzig the armies of Napoleon were still an active force but in retreat from the onslaught of the Russian, Austrian and other German armies of the Sixth Coalition.

By 1814 Paris had fallen and Louis XVIII of the French House Of Bourbon was placed, by the invading allies, back on the throne in Versailles. For his sins Napoleon was exiled to the Mediterranean island of Elba where he was allowed to keep his status as emperor and continue as its sovereign.

On Elba it did not take long for him to organise his sovereign state by building roads, developing iron mines and improving the education and legal system on the island. He introduced modern agricultural practices and within a few months had established a small army and navy.

This was a man with a grander vision than ruling 12,000 inhabitants on a small island. He grew restless and felt his destiny calling him to return to his Gallic homeland and fulfill his vision of conquering and creating a unified Europe under French rule.

On 26th February 1815 Napoleon left Elba on a brig with 700 men and headed for France. He landed in southern France and headed to Paris. An army was sent by Louis XVIII to intercept and capture Napoleon but upon seeing their former commander they turned and joined Napoleon instead.

The combined forces continued their march towards Paris and as word got around their numbers swelled organically. Napoleon arrived in Paris in March 1815 and by June his army grew to 200,000. Meanwhile his European enemies were also forging alliances to defeat him once and for all.

The stage was set and Napoleon decided to take the fight to his enemies. The theatre of war for this final showdown would be at Waterloo in the United Kingdom Of The Netherlands. The battle of Waterloo took place on the 15th June 1815. It was brutal, but it proved decisive and Napoleon was finally defeated. He was again exiled but this time to the windswept island of St Helena in the southern Atlantic Ocean which is over one thousand miles from the southern African continent.

He spent the rest of his days on St Helena and died on 5th May 1821. The legacy of this general and statesman is one for the ages. Napoleon Bonaparte displayed tactical brilliance on both the battlefields of Europe and in its political corridors of power. He inspired a nation with powerful speeches and bequeathed the world a set of civil laws that have been adopted in more than 70 countries.

He was a leader of men who inspired with a patriotic passion fueled by a confident commitment to Gallic success. His advisors dared not to tell him something could not be done because Napoleon would reply with the phrase: "The word impossible is not French". Indeed, maybe the Duke Of Wellington should have informed him that Waterloo was not French either.

He was certainly someone who knew how to make his presence felt with some great one liners, so this is my compilation of 25 of the best Napoleon Bonaparte quotes.

Arthur Wellesley, 1st Duke of Wellington spoke respectfully of his arch enemy: "His presence on the field made the difference of forty thousand men"

The author Willis Mason West described his modus operandi: "He worked systematically to transform the people's earlier ardor for liberty into a passion for military glory and plunder"

The political theorist Emmanuel-Joseph Sieyès recognised his talents: "Gentlemen, we have a master; this young man does everything, can do everything and will do everything"

The historian Steven Englund made an historical comparison: "Hitler and Napoleon were both deeply cynical, opportunistic men, that both manipulated people without an ounce of apparent bad conscience, that both took criticism badly (or not at all) and ended up listening to almost nobody except themselves. Finally, each brought disaster upon himself and his country"

Steven Englund went on to say: "Hitler made a poor military leader who did not trust his generals, while Napoleon was a brilliant general who remained loyal to his top officers"

The historian François-René de Chateaubriand did a comparison: "Washington's Republic lives on; Bonaparte’s empire is destroyed. Washington and Bonaparte emerged from the womb of democracy: both of them born to liberty, the former remained faithful to her, the latter betrayed her"

The historian Andrew Roberts paid him great credit with this quote: "The ideas that underpin our modern world: meritocracy, equality before the law, property rights, religious toleration, modern secular education, sound finances, and so on—were championed, consolidated, codified and geographically extended by Napoleon" 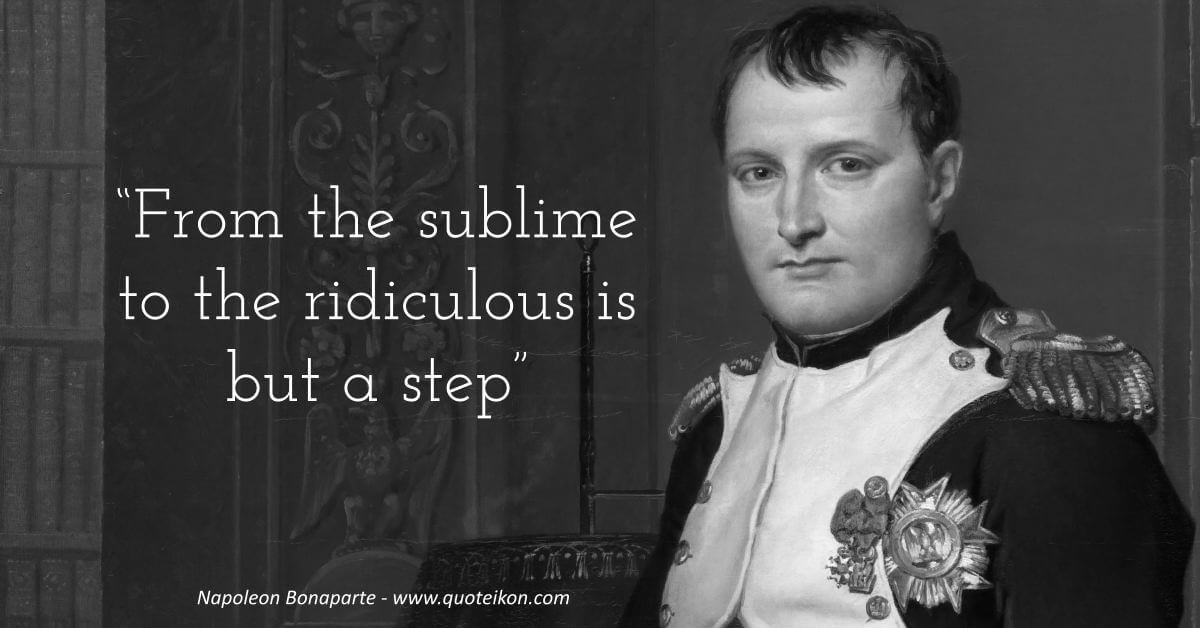