John Keats short life had all the hallmarks of the tortured soul that was to enshrine his reputation as one of the greatest doomed poets of the romantic movement. His early demise at the tender age of 25 deprived the world of a literary genius who in the six years he was writing poetry it only amounted to 54 poems in three volumes.

He was highly critical of himself and in his final year when he realised the grim reaper would come to claim his earthly existence he did not believe he had created a body of work that would immortalise him for millennia to come.

Although not fully appreciated by critics during his lifetime his peers thought otherwise and the poet Percy Bysshe Shelley was so distraught at Keats' death he composed the elegy "Adonais" in his honour, it consisted of 55 nine lined Spenserian stanzas and is considered one of Shelley's finest poems.

By the close of the nineteenth century the world had recognised the immense talent of Keats and he had become one of the most celebrated English poets that students of literature wanted to study. His work is still popular in the modern age as his timeless odes shine a light on life itself with his perceptive prose giving profound meaning to new generations of idealistic poets.

He recognised the importance of imagination and touched on all the dimensions of emotion as he breathed a realism into the melancholy of life, suffering and death whilst raising spirits with joy and love to give hope.

He felt the passion of love with his fiancée Fanny Brawne to whom he was doomed never to marry as he succumbed to tuberculosis in 1821, it was a disease he was all too familiar with as he knew the pain of death because his uncle, mother and brother all died from tuberculosis during his lifetime.

Fanny was devastated by his death and went into mourning for six years and it was a further six years until she finally got over his passing and got married. As with all the greats he was never short of a interesting quip or two, so here is my compilation of 20 of the best John Keats quotes

Lord Byron said of his fellow romantic poet: "His fragment of Hyperion seems actually inspired by the Titans, and is as sublime as Aeschylus. He is a loss to our literature"

Percy Bysshe Shelley reminisced on his genius, and what he foretold in this one line became reality: "Forget the past, his fate and fame shall be an echo and a light unto eternity"

Cowden Clarke pinpointed his initial spark of inspiration: "It was The Faerie Queene that awakened his genius. In Spenser’s fairy land he was enchanted, breathed in a new world, and became another being" 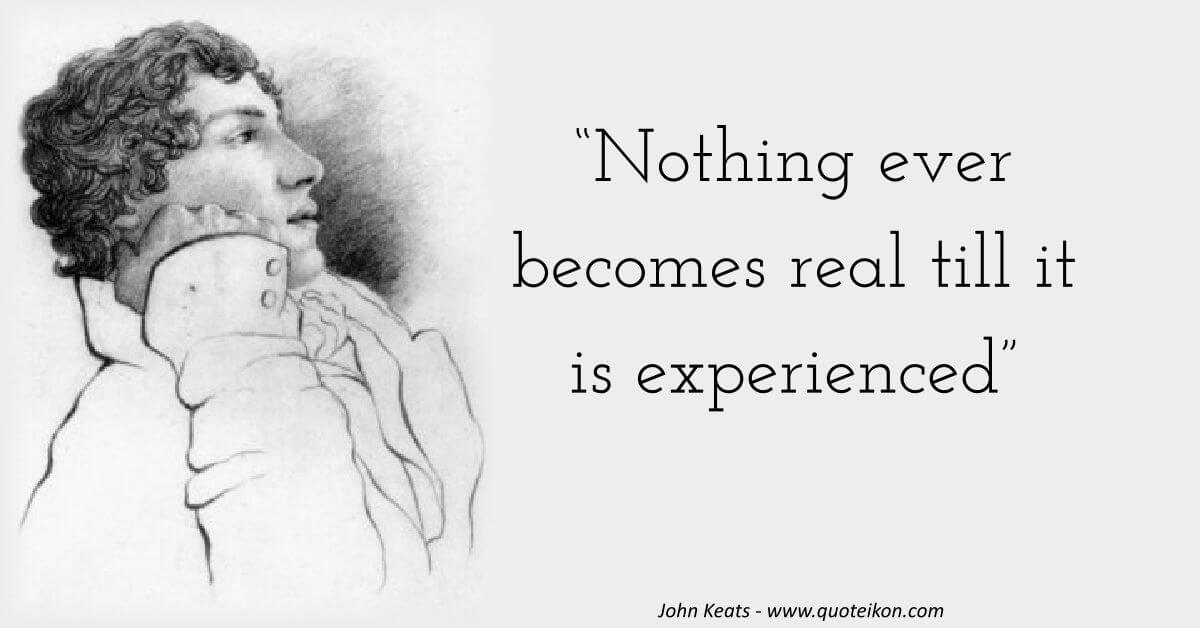