He was the Indian philosopher and master of the creative arts whose pen, brush and music was to touch the hearts and minds of a world curious about the mysteries of the east. Although he is known mostly for his poetry, his musical contribution is equally impressive as he created the national anthems for both India and Bangladesh whilst his lyrics are sung to the tune of the Sri Lankan national anthem. His name is Rabindranath Tagore and it was his poetic pen that captured the European imagination of the literary elites in the 1910's.

Tagore came from a well to do family in Calcutta, his early works were mostly written in his native Bengali and were very well received across all classes of people in India. Encouraged by this he decided to translate his most famous work the "Gitanjali" into English and in 1912 embarked on a whirlwind journey to England that would change his life forever. As he sailed away from his homeland, crossing the Arabian Sea, little did he know he would soon be standing shoulder to shoulder with the literary giants of the world.

Once in London, Tagore asked the painter William Rothenstein to read his poems and although the artist was suitably impressed he requested a second opinion from the writer William Butler Yeats. Upon his first reading the Irish wordsmith was astounded by sheer breadth of poetic imagination on display. Yeats felt a stimulation so inspiring he made it his mission to champion the cause of the new found poet from the east and his praise went into a hyperbolic overdrive in the literary and journalistic circles he frequented.

With Yeats' help, Rabindranath Tagore's poetic output was published by MacMillan. He went on to steal the hearts and minds of the press who were charmed by his eloquence and enchanted by his presence. The tabloid hacks and broadsheet suits all interpreted his flowing white hair, beard and robes as something mystical from the east.

Within one year he was holding the coveted Nobel Prize for Literature in his hand and in doing so he became the first non-European to win this prestigious award. Within two years the influence of Tagore was global with "Gitanjali" being translated into dozens of languages spanning every continent. His success was phenomenal, it would eventually see him visiting in excess of 30 countries eager to read the poetry and listen to the words of this remarkable man.

In 1930 two great thinkers came together when Tagore met Albert Einstein and the two participated in a recorded intellectual discourse on science, truth and the universe. It was riveting stuff that made the front pages around the world as a mutual respect built up between the physicist and the philosopher.

It was Tagore's poetry that gave him worldwide fame and although all his creative works are still revered as national treasures in his homeland they did not stand the test of time elsewhere. His star that rose so brightly in the east to supernova in the west has been dimmed by subsequent generations of literary critics who failed to share the imaginative enthusiasm of Yeats and Ezra Pound who championed his cause in the second decade of the twentieth century.

The critics fail to see beyond the translated words of the artist who could paint in music and touch the heart with an emotive turn of phrase in his natural language. In his native Bengali, Tagore wrote over 18,000 pages of prose and poetry in a fluid language that is as natural to the poets pen as charm was to Casanova. Indeed many translations of Tagore's poetry lost the instinctive flair that was abundant in his natural tongue but suffered in their English context. It is for this sin that modern day western critics seem ambivalent towards his standing as one of the worlds literary greats.

Tagore's artistic nature covered the full spectrum of creative disciplines including painting which he started late in life. His inventive instinct was quickly apparent and his works were shown in galleries across the globe. Today most of his artwork is deemed a national art treasure making them non-exportable out of India.

It was not just the arts he excelled at for he was a true polymath who mastered many creative disciplines throughout his lifetime. He now stands as a true son of Indian soil who proudly put his country's name on the world map of creative literature. As you would expect from such a wise philosopher he was good for a one liner also, so here is my compilation of 24 of the best Rabindranath Tagore quotes.

Mahatma Gandhi was quoted in a discourse with Tagore: "The Poet has been unnecessarily alarmed at the negative aspect of Non-cooperation. We had lost the power of saying ‘no’. It had become disloyal, almost sacrilegious to say ‘no’ to the Government... Non-cooperation is the nation’s notice that it is no longer satisfied to be in tutelage... And if India is ever to attain the Swaraj of the Poet’s dream, she will do so only by Non-violent Non-cooperation"

Jawaharlal Nehru made this comparison: "No two persons could probably differ so much as Gandhi and Tagore. The surprising thing is that both of these men with so much in common and drawing inspiration from the same wells of wisdom and thought and culture, should differ from each other so greatly!... I think of the richness of India’s age-long cultural genius, which can throw up in the same generation two such master-types, typical of her in every way, yet representing different aspects of her many-sided personality"

The author Vandana Shiva was impressed to say: "Tagore saw unity with nature as the highest stage of human evolution"

The philosopher Amartya Sen felt the missing essence after translation: "Anyone who knows Tagore's poems in their original Bengali cannot feel satisfied with any of the translations. Even the translations of his prose works suffer ... the charms have vanished in translation"

William Butler Yeats famously described his work thus: "These prose translations have stirred my blood as nothing has for years - These lyrics display in their thought a world I have dreamed of all my life long. The work of a supreme culture"

The poet Ezra Pound shared this observation: "He has given us a beauty that is distinctly Oriental, and yet it is almost severe, it is free from that lusciousness, that over-profusion which, in so much South-Oriental work, repels us. His work is, above all things, quiet. It is sunny, delighting in sunlight."

The Israeli President Shimon Peres revealed two sources of inspiration: "Many of us were educated on the literature of India when we fell in love we read Rabindranath Tagore and when we matured we tried to understand Gandhi"

The author George Bernard Shaw reluctantly had to decline an invitation to visit Tagore: "Unfortunately I am not really visiting India; but the ship in which I am going round the world to get a little rest and do a little work has to put in at Bombay and Colombo to replenish her tanks; and on such occasions I step ashore for a few hours and wander about the streets and such temples as are open to European untouchables .... My only regret is that I shall be unable to visit you. My consolation is that the present situation in India will not bear being talked about. I understand it only too well" 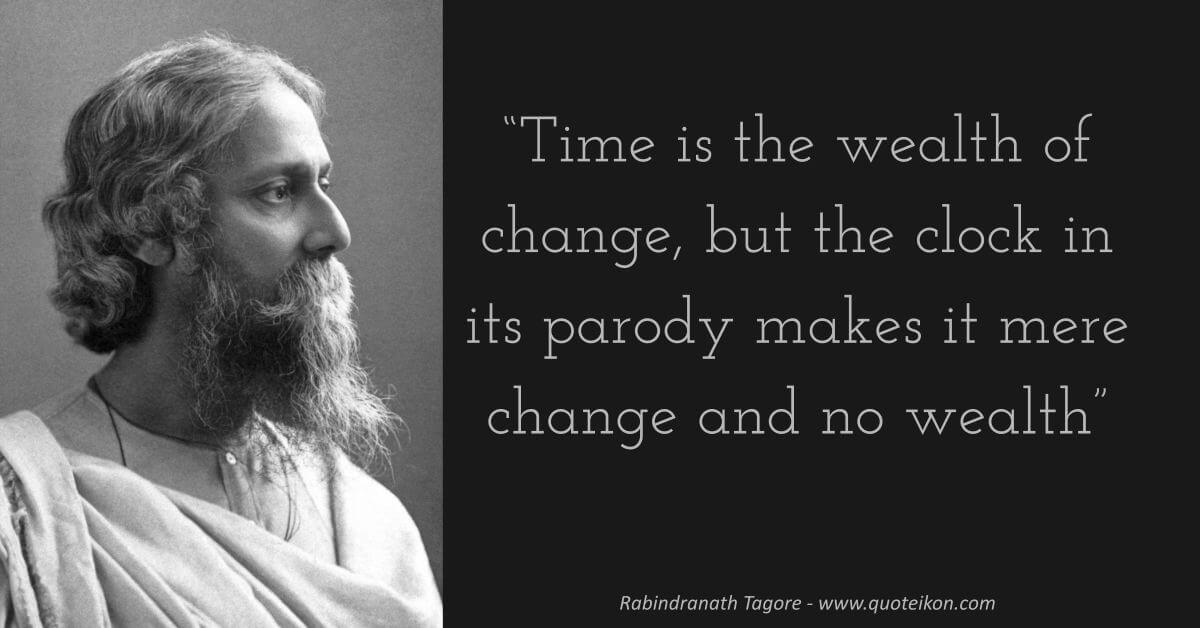