Giacomo Casanova was the Venetian boy whose handsome good looks, roguish charm and unbridled self esteem saw him seduce, swindle and scandalise the upper echelons of 18th century European society. Indeed, Casanova himself recalled as much in his memoir when he said: “I was born for the sex opposite to mine, I have always loved it and done all that I could to make myself loved by it”.

His life of philandering infamy is only known to people in the 21st century because of his boredom in his later years when he decided to write his memoirs, if it was not for this Casanova probably would have been long forgotten in the annals of history.

At the age of 21 a good deed paid off very handsomely for Casanova when he helped save the life of a rich Venetian nobleman called Don Matteo Bragadin. The nobleman's good fortune was repaid when he proceeded to shower the grateful young Casanova with wealth substantial enough to adopt a playboy aristocratic lifestyle.

This gave the, not so innocent Giacomo, the platform where he savoured his first taste of high society. It was in this social circle where the handsome Casanova indulged himself whole heartedly in the pleasures of the flesh with an abundance of princesses, actresses and leading ladies of his day who all found his charms irresistible. Pleasure became his business whilst gambling and other schemes were his way of funding it.

In Paris he introduced the first State lottery which earned him a small fortune which he duly squandered on wine, women and wandering around Europe. Quoting Casanova from his memoir he spoke fondly of his life style: “Cultivating whatever gave pleasure to my senses was always the chief business of my life”.

Indulging in carnal pleasures inevitably leads to jealousy which got Casanova into a lot of trouble as he fought duels with many rival lovers. He upset a Polish nobleman called Colonel Franciszek Ksawery Branicki whom he fought a duel with in 1766 over the charms of an Italian actress, both men were wounded with Casanova nearly losing his left hand when doctors recommended amputation which he refused.

The debauched behaviour of Casanova came to the attention of the Venetian authorities who, after numerous complaints from the public, deemed him a scoundrel and a charlatan. This led to his arrest and a five year prison sentence to be served in the Doge's Palace Prison for his various misdemeanours as charged by the representatives of the people of the Republic.

After fifteen months of incarceration, Casanova and a fellow cell mate called Father Balbi, became the only prisoners ever to escape from the clutches of the Doge's prison. Their daring escape saw them hot tailing it over rooftops to their freedom but, it came with a price, as he had to exile himself from Venice as a result.

The bordello's of Rome, Paris, Vienna and London all beckoned and eased the burden of being away from his canal lined home. From boisterous bordellos to the bastions of the establishment, he swept into the upper echelons of high society with ease as Casanova was not only an inveterate seducer but, an intellectual who held his own in conversations with the likes of Lorenzo Da Ponte, Voltaire, the statesmen Johann Wolfgang von Goethe and Benjamin Franklin.

As you can imagine, this silver tongued amorous adventurer was never short of a charming word but, for all his eloquent discourse, it was his womanising ways that saw him go to his deathbed in Bohemia still yearning to go back to place he loved most, Venice. There were also some words of wisdom as he was also good for a thoughtful one liner also, so this is my compilation of 15 of the best Giacomo Casanova quotes

Fashion designer Pierre Cardin was impressed to say: "Casanova was a great writer, a great traveler, a great rebel, a great provocateur, I have always admired his subversive spirit"

Tom Vitelli, a leading American Casanovist said of his autobiography: "His goal was to create an honest portrait of the human condition. His honesty is unsparing, especially about his loss of powers as he ages"

He was considerate, according to a quote attributed to Corinne Le Bitouzé who was the curator of his autobiographical original manuscript: "He tried to find husbands for his former lovers, to provide them with income and protection" 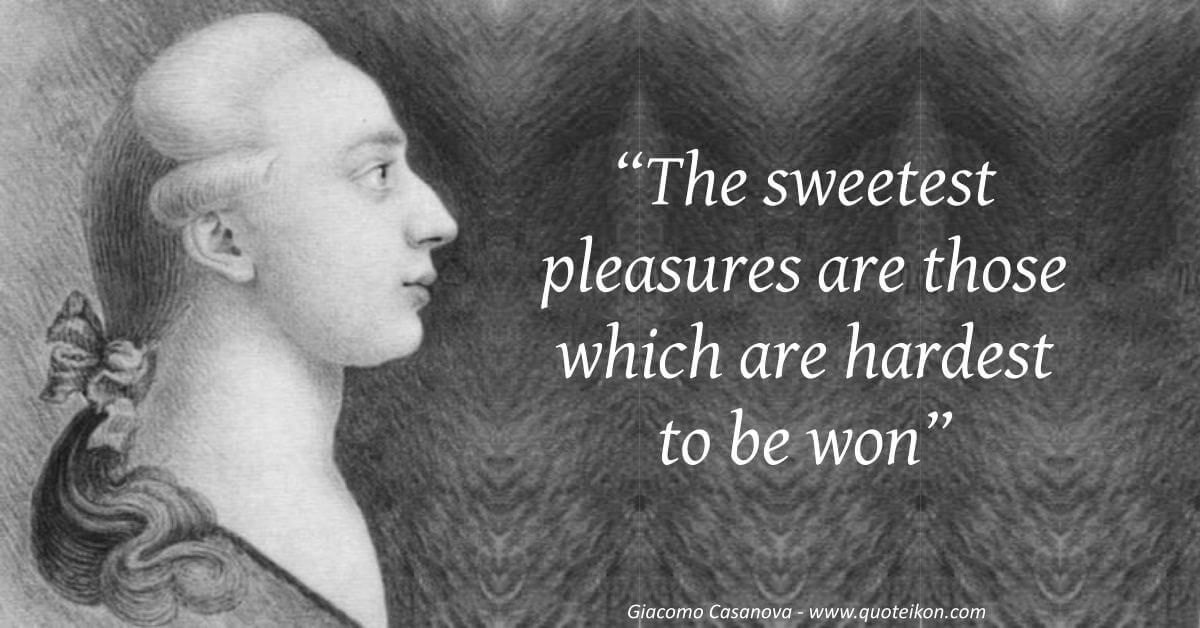