Upon the podium of the greatest playwrights an Irishman rose as the bard of Stratford nodded his approval. A wry grin swept across his lips that previously preached his piquant wit. The almighty stared through gritted teeth and Lucifer glared at his laurel wreath. Judgement day and the critics had spoken. George Bernard Shaw stood, proud, twas no small token.

During his lifetime George Bernard Shaw rose to literary prominence, posthumously his star never faded. We can only imagine the surreality on the other side of the grave. But back down on earth he is generally regarded as the most distinguished English language dramatist since William Shakespeare.

Without a degree to his name, he was a self taught man who denounced the so called education system he was subjected to. In a stinging rebuke to academia he remarked: "Schools and schoolmasters, were prisons and turnkeys in which children are kept to prevent them disturbing and chaperoning their parents".

After moving to London in 1876 he worked hard and initially established himself as a critic and a satirist of high repute. Shaw became politically aware and he adapted his views on social ills into his body of work that sometimes caused outrage but always arose interest.

Under the influence of the American author Henry George his interest in social theory was roused. Inspired by Karl Marx, his socialist spark was lit. He became a soap box orator on the streets of London where he could command the attention of all those in ear shot. George Bernard Shaw pricked the social consciousness of a society still stuck in the Victorian mindset. They were ill prepared for such an erudite upstart who could weave a tale so smooth yet powerful that it resonated with thought provoking meaning in the minds of his audience.

He developed a penchant for verbal jousting. Shaw took this a step further when he joined a debating club called the Zetetical Society. The Fabian Society was his next port of call. His political views were impressive and persuasive leading him to be elected onto the Fabian's executive committee.

Bernard Shaw (as he preferred to be called) became highly influential in the Fabian Society. The Fabian Society in turn wielded enormous influence over British politics. The Fabians, along with the trade unions, were the seeds that bore the Labour Party in 1900. They founded a propaganda tool called the New Statesman magazine in 1913. Their involvement can be traced to the creation of the welfare state post WW2.

The political fingerprints of Bernard Shaw were all over Labour socialist policy in the UK during the first half of the twentieth century. He may not have been an elected candidate for parliament but, his written word in various literature for the Fabian Society carried much influence within the ranks of the socialist movement.

In the 1945 general election when the Labour party were swept into power there were 229 Fabian Society members out of the 393 Labour delegates that were elected. The Fabians carried a political punch that could not be ignored.

George Bernard Shaw held court at the Fabian Society for many years. From its early days until the late 1920's the views of Shaw were the dominant voice that held sway. The political writing of Bernard Shaw, from his unsigned writing in pamphlets and magazines to his published books were considered authoritative. Every radical socialist worth their salt had read the 1928 Shaw book: "The Intelligent Woman's Guide to Socialism and Capitalism". However, for all his political prose it is his skills as a playwright that Bernard Shaw is best remembered.

His first taste of theatrical success came in 1894 when his play "Arms and the Man" was well received by London audiences. Shaw's next dramatic success came in 1904 with "John Bull's Other Island", it was a rip roaring comedy about an Englishman in Ireland and drew much critical acclaim.

Next up was "Man and Superman", although it was written in 1903 its opening night came in 1905 at the Royal Court Theatre in London. Bernard Shaw was inspired to write Man and Superman by the legendary Italian fictional libertine Don Juan and the title came from Friedrich Nietzsche's philosophical ideas on Übermensch (a super human).

George Bernard Shaw had also written a play in 1898 called Caesar and Cleopatra. This never received the critical acclaim it deserved until it was produced in New York in 1906 and at the Savoy Theatre in London the following year.

The turn of the century had been kind to this dramatist. By the closing curtain of the first decade the name George Bernard Shaw was established in the theatre lands on both sides of the Atlantic. With his reputation intact his artistic licence expanded giving rise to introducing experimental forms of unorthodox drama. He toyed with discussion drama and serious farce. It resulted in "Getting Married" (1908), "The Shewing-Up of Blanco Posnet" (1909) which was banned by the British governing censor and "Fanny's First Play" (1911).

The potent pen of the playwright was merely warming up. In 1913 "Pygmalion" premiered in Vienna, translated into German by Siegfried Trebitsch. By 1914 Pygmalion was a hit in both New York and London. The play was based around the Greek mythological figure of the same name and is by far the most universally successful Shaw play. Pygmalion has crossed all ethnic and language barriers with each country meshing it within their own cultural fabric.

As he fine tuned his skills as a playwright Bernard Shaw became a master of weaving his social theories into his dramatisations. This became his literary modus operandi that saw him produce a body of work so intensely stimulating of mind that it was mass produced and translated into print across the entire globe.

By the time of his death he was the most widely read and listened to writer in a world hungry for his deep insights into every subject under the sun, he was in the words of the critic John Campbell a: "Tolstoy with jokes, a modern Dr Johnson, a universal genius who on his own modest reckoning put even Shakespeare in the shade".

His achievements are legend with his best-written screenplay Oscar for Pygmalion in 1938 making him the first person to be awarded both the prestigious Academy award and the Nobel Prize for literature which he previously collected in 1925, since this epic milestone of literary accomplishment only Bob Dylan has been awarded both of these coveted prizes.

The Nobel prize George Bernard Shaw picked up in 1925 was for the play "Saint Joan". This was a Joan of Arc story with a typical Shaw slant, idealism and humanity. The play is often described as a "tragedy without villains" and a "stimulating satire". Shaw gracefully received the award but refused to accept the money. He modestly stated that: "Nobel Prize money is a lifebelt thrown to a swimmer who has already reached the shore in safety".

When I think of a great writer, the last thing on my mind would be bean counting. But George Bernard Shaw was a man of many talents including being a co-founder of the London School of Economics. The LSE opened its doors in the summer of 1895 and its notable Alumni draws proud testimony to its standing as a seat of learning with 55 students who went on to become heads of states and 18 who became Nobel laureates.

In an unusual turn of events Shaw bequeathed a significant sum of money for the development of a 40 letter alphabet that was meant to replace the incumbent 26 letter alphabet. This resulted in a phonetically kind "Shavian Alphabet" that was published in 1962 by Ronald Kingsley Read. Several classic books have been translated into Shavian including the works of Edgar Allan Poe entitled "Poe Meets Shaw: The Shaw Alphabet Edition of Edgar Allan Poe".

Shaw's home in Ayot St Lawrence was turned into a museum and in an ironic twist worthy of one of his novels his Oscar statuette was used as a museum door stop until it was identified, restored to its former glory and put proudly on display. This affable Irish man was a wordsmith of wizardry and wit beyond compare. He was also a man of imaginative creativity who uttered this immortal quote: "Some look at things that are, and ask why. I dream of things that never were and ask why not". Why not indeed, the art of closing your eyes to see.

The first prime minister of India Jawaharlal Nehru was moved to say: "He was not only one of the greatest figures of his age, but one who influenced the thought of vast numbers of human beings during two generations"

The scientist Albert Einstein was impressed: "Shaw is undoubtedly one of the world’s greatest figures both as a writer and as a man"

The novelist Thomas Mann was praiseful: "He did his best in redressing the fateful unbalance between truth and reality, in lifting mankind to a higher rung of social maturity. He often pointed a scornful finger at human frailty, but his jests were never at the expense of humanity"

The critic Fintan O'Toole described his legacy: "Shaw changed not what people thought but the way they thought"

Oscar Wilde spoke one of his famous witticism's about Shaw: "An excellent man: he has no enemies, and none of his friends like him"

President Harry S. Truman paid this tribute: "The world of letters has lost a pre-eminent figure in the death of George Bernard Shaw. As critic, essayist, and dramatist he left the indelible print of his genius on a prodigious literary output during more than two generations"

The literary critic John Carey described his gift to the world: "In his works Shaw left us his mind … Today we have no Shavian wizard to awaken us with clarity and paradox, and the loss to our national intelligence is immense" 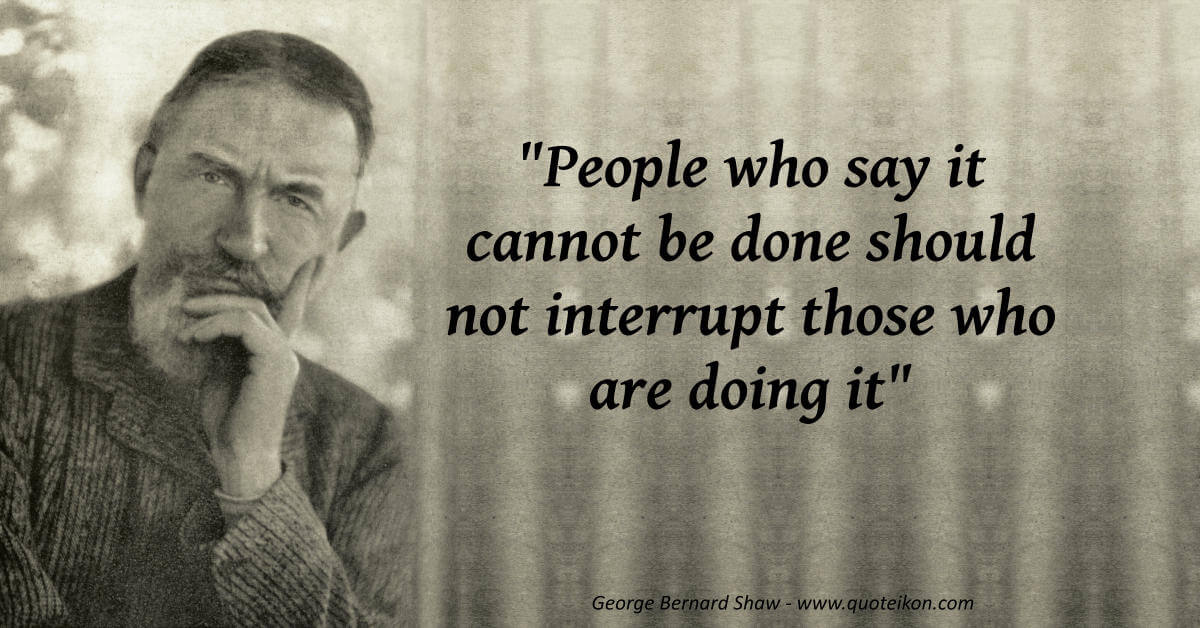