This was the man from the land of the Irish who wrote in the language of the English. He first traversed his stream of consciousness prose across the Irish Sea. The Atlantic Ocean was next. Then the world fell to the numerous impulsive private thoughts expressed through his many protagonists. His name was James. James Joyce the Irish boy who forever changed the face of English literature in the twentieth century.

James Joyce was the Dublin wordsmith who dared to delve deeper than dialogue. He dealt in the dialogue of the mind. First impressions, mindless thoughts, drifting concentration, consequential thinking, lapses from the rational to the irrational were all fair game to be phrased within his expressive vernacular pen sat in the mind of his characters.

And what an expressive pen he possessed. His multiplexed flow of thinking ink onto paper conjured symbolic systems that grew out of his Dublin alleyway approach to vocabulary. His was a penchant for chewing through the proverbial granite of contemporary Dublin. He knew the streets. From the north side to the south, there are plaques for tourists to locate the many domestic households where the Joyce family dwelt.

He was born to a creative family who became impoverished. James Joyce was the eldest of 10 siblings. His first published work was a poem scribed at the age of nine about the death of the prominent Irish politician Charles Stewart Parnell.

His first serious work was a collection of fifteen short stories aptly called the "Dubliners". The stories were born in and of Dublin through the words of Joyce. It is a cradle to the proverbial grave rendition of cultural regression stymied by Irish nationalism and identity. Although Joyce started writing the "Dubliners" in 1904 it was not published until a decade later. It is often regarded as the vantage point that gave Joyce clear views into his vision of modernist writing.

The "Dubliners" (1914) cut his literary teeth, he then became the messenger of a writing style that would go a long way to defining a century of literature. James' exposure to the grand tapestry of Dublin craic was his apprenticeship. Europe would give his words a deeper tone and refinement.

Upon leaving Ireland at the age of twenty he spent much of his life living in Paris and Trieste. Joyce adored the cafe lifestyle of Paris. He hung out with some of the finest creative minds of the day. James lunched on ideas in the company of Ezra Pound and Ernest Hemingway and he drew artistic inspiration from the vision of Pablo Picasso.

When both world wars raged through continental Europe Joyce moved to Switzerland as its neutrality meant it was a haven for refugees, the politically displaced, illicit funds and creative artists.

Whilst residing in Zurich during WW1, Joyce's eyesight worsened to become an ocular affliction that would result in him having twelve eye operations to rectify his rapidly blurring vision. The deterioration in Joyce's eyesight worsened with age. He ended up using crayons to write tedious large size letter sentences or rely on dictation to assistants such as Samuel Beckett, who was later to become a distinguished author in his right.

Post operation blindness became a hinderance that Joyce learned to live with. It caused his masterpiece, Ulysses, which he began in 1914, to be delayed until 1921. His ocular deterioration had started years before, it was a nuisance that plagued the novelist throughout his adult life.

The vision of James Joyce gave a symbolic effect to his many works. In the "Dubliners", many scenes take place at dusk or at night, giving way to the correlation to how Joyce saw life through a blurred dim light. During the Gold Cup race in Ulysses, a "dark horse" called "Throwaway" comes from behind to win. Much in the same vein, the character "Bloom" is also regarded as a dark horse because his friends believed he backed the winner at 20 to 1.

His effective use of symbolism was not just in his writing as he lived by this code also. Joyce delayed publishing "Ulysses" until his fortieth birthday on 2nd February 1922. Whilst he chose the publication date to coincide with his birthday for luck, he added his own symbolic touch by having it bound in a blue cover with white letters as these were his lucky colours.

In 1907 Joyce even brought symbolism into the naming of his baby girl. The naming of Lucia Joyce was inspired by the patron saint of blindness, St Lucy. Through his writing and his life, symbolism would become part of the lore of James Joyce.

Then there was the 16th June. This day has set itself into symbolist literary folklore. It was a day that James Joyce came of age in 1904 with his then girlfriend Nora Barnacle. She was to become his muse, the mother of his children and they would eventually marry.

The 16th June was also the day that the novel Ulysses unfolded. It would become known as Bloomsday. So named after the protagonist of Ulysses Leopold Bloom. Bloomsday is now celebrated annually in honour of James Joyce and his contribution to the literary world.

Ulysses was his chef-d'oeuvre. A truly remarkable masterpiece that thrived in a concoction of improbable thoughts and timely coincidence. Literary critics were delighted. The puritans of New York were not too enamoured though, they called it obscene.

Much to the disdain of Joyce and the delight of bootleggers Ulysses was banned in the United States as it was deemed indecent material. It took eleven years of legal tribulations that led to the thoroughness of a high court judge to patiently read it from cover to cover and give judgement. John Monro Woolsey was the judge and after careful consideration he revoked the ban to make Ulysses legally available for sale in the U.S. from 1933 onwards.

The judges landmark decision was welcome and in the courts summing up he was quoted as saying: "But in 'Ulysses', in spite of its unusual frankness, I do not detect anywhere the leer of the sensualist. I hold, therefore, that it is not pornographic".

In 1923 the UK had also followed the US lead and banned Ulysses. It was not until 1936 that the ban in England was lifted. Joyce's home country of Ireland were also outraged at his writing and banned Ulysses. Smuggled copies were rife. Customs officers burned what they could find but it did not stem the tide of demand.

The Chinese communist leader Mao Zedong also banned this book, in fairness Ulysses was just one amongst many others that Chairman Mao deemed deviant western literature. It was not until 1995 that Ulysses would be available in China, even then it took 5 years to translate with some 6,000 footnotes explaining the rudiments of Roman Catholicism and Irish history.

The last published work of James Joyce was the subject of much critical debate. The novel was "Finnegans Wake" and it was sixteen years in the making before it was published in 1939. It is not an easy task to pick up the Ulysses baton and raise the level of literary genius. Joyce took on the challenge never the less. But finding the genius in Finnegans Wake is like wading through treacled text. You can sense the genius. You can feel the genius. But it is damn hard to pinpoint that genius.

Finnegans Wake is where the aesthetic met the artistic in the avante-garden of coincidental conjecture punning from page to page as freely as a radically linguistic author could muster. Its vision is poetic. The key is understanding the whole and not peering down the hole where you imagine an articulate sentence should be. If everyone could understand the genius everyone would want to be it.

The literary critic Harold Bloom was impressed, he shared this comparative notion on Finnegans Wake: "If aesthetic merit were ever again to center the canon it would be as close as our chaos could come to the heights of Shakespeare and Dante".

Joyce was a polyglot who could speak 17 languages including Arabic, Greek, Hebrew, Latin, Russian, Sanskrit and he even learned Norwegian to understand the native meaning of the works by the playwright Henrik Ibsen. Apart from English his most fluent languages were French, German and Italian, which are the languages of the countries he favoured most to reside in.

As a writer Joyce's career ran on a parallel track with Virginia Woolf as she too was a pioneer of the literary technique known as the "stream of consciousness". The commonalities did not end there as they were both born and died in the same years and they wrote watershed modernist novels (Ulysses and Mrs Dalloway) in the 1920's with both books having major events happening in the month of June.

Joyce's legacy just like his Irish literary rival George Bernard Shaw, has placed him firmly in the stratosphere of the most influential novelists of the 20th century. His sharp witted imagination pulled no punches, his audacity knew no bounds whilst his humanist writing appealed to readers starved of such intricate but delicate detail.

Where it was once castigated as obscene, Ulysses is now celebrated and even taught in colleges and universities. Its publication, battle against conservative Victorian attitudes to censorship and eventual victory against the puritans was a watershed moment in English literature. Joyce had pushed the boundaries of acceptable prose to allow subsequent novelists to open their minds and unleash a new wave of modernist inspired novels.

The old saying: "you can take the boy out of Dublin, but you cannot take Dublin out of the boy", is an apt phrase fit for James Joyce. Afterall, he confessed it was all he needed to know when he said: "For myself, I always write about Dublin, because if I can get to the heart of Dublin I can get to the heart of all the cities of the world. In the particular is contained the universal". That last sentence. That last line. The particulars of everyday lives are indeed universal. He knew it, but it took the vision of Joyce to illustrate it.

Ernest Hemingway was glowing in his reference to Ulysses when he said: "Joyce has written a most goddam wonderful book". He added the ultimate compliment when Hemingway called him: "The greatest writer in the world"

Author Arnold Goldman summed him up by saying: "He was a prominent symbolist, modernist, realist and formalist whose work have marked the beginning of an era in prose writing"

Author Derek Attridge spoke of the literary boundaries he expanded with this quote: "The unprecedented explicitness with which Joyce introduced the trivial details of ordinary life into the realm of art opened up a rich new territory for writers"

The novelist Samuel Beckett once described Joyce's style: "His writing is not about something. It is that something itself"

Carl Jung was impressed to say: "What is so staggering about Ulysses is the fact that behind a thousand veils nothing lies hidden; that it turns neither toward the mind nor toward the world, but, as cold as the moon looking on from cosmic space, allows the drama of growth, being, and decay to pursue its course"

Kevin Birmingham shared this observation: "One of the ironies of Ulysses is that while it was banned to protect the delicate sensibilities of female readers, the book owes its existence to several women. It was inspired, in part, by one woman [Joyce’s wife, Nora Barnacle], funded by another [Harriet Shaw Weaver], serialized by two more [Margaret Anderson and Jane Heap, joint editors of the Little Review] and published by yet another [Sylvia Beach]"

Virginia Woolf found chaos in the genius: "Ulysses was a memorable catastrophe - immense in daring, terrific in disaster" 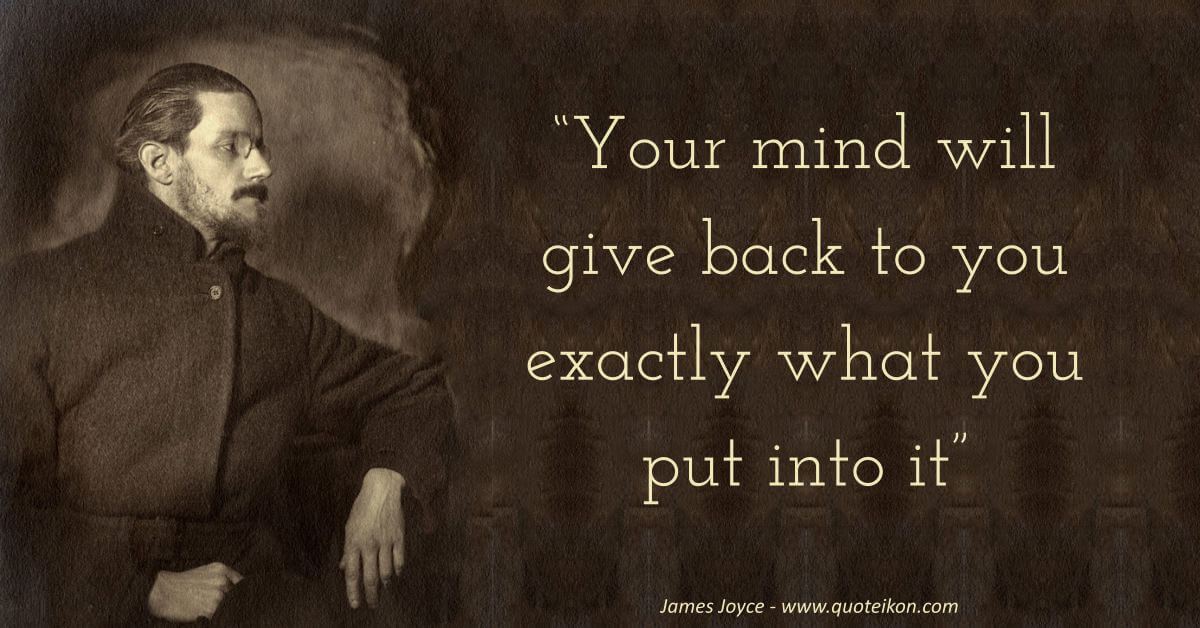