Whodunit! Who wrote the first two epics of Greek antiquity? The consensus follows the logic that a blind poet first penned the Iliad and the Odyssey. The blind man in question was Homer. However, historians have for centuries challenged this consensus with contradictory conclusions that question the authenticity of the author.

Back in the day, epic poetry was recited rather than read from the written word. These orally performed poems were memorised and retold to audiences expectant of entertainment. In the grand tradition of Chinese wispers, probability suggests, that words got changed over the course of days, let alone centuries, until pen was put to parchment and they were finally recorded in the written form. Knowing human characteristics, what is the likelihood of the text remaining constant over a number of centuries? I think you get my drift.

But who was Homer? No definitive proof of his existence has been presented as an indisputable fact. Yet the stories persist of his authorship. This must have started somewhere. Sometimes there is no smoke without fire, there must have been an original author, maybe he was called Homer, but, this is where the plot thickens.

Both the Iliad and the Odyssey look out of historical context when compared with the lack of other works of literature from the suggested era of authorship. How were such perfect prose created without any less than perfect poems emanating from the same era? History has taught us mankind learns and improves. But the Iliad, if considered to be written in the 8th century BC, came like a bolt out of the blue. Maybe Zeus himself zapped the blind poet to inspired verse!

As time rolled by, the ancient Greeks realised the cultural importance of influential literature. The epics needed ownership. More importantly they needed Greek ownership. How the attribution occurred for Homer is anyone's guess. The rise of Homer could easily have been a figment of Greek imagination filling the cultural void with a name and eventually, courtesy of the artists, a face that put literary roots firmly in Greek soil.

Creating believability requires advocates and detractors. In the 5th century BC, the philosopher Xenophanes was recorded as critical of Homer's disrespectful depictions of the gods. In the 4th century BC the historian Herodotus paid tribute to Homer and went as far to write a (much disputed) biography called "Life Of Homer". There were more. Afterall, the life of a dead artist has always been capitalised upon, whether it be for political, cultural or financial gain. It matters not if the said artist is the actual creator of the works, more important is the cultural influence.

By the Hellenistic age, the seeds of a literary manifestation were past the gestation period. Homer was a fully fledged symbol of Greek literature. Later, when the Romans came on the scene, they too bought into the story of Homer the poet. History has a reciprocal way of manifesting itself. A certain Roman historian, Pliny the Elder, coined the phrase "in a nutshell" whilst alluding to Cicero commenting, probably with tongue firmly in cheek, that The Iliad, written on parchment, was enclosed within a nutshell. Yup all 15,000 plus lines of it. The point is, it was now mainstream in a non-Greek culture.

The Legacy Of Homer

The Iliad and The Odyssey were not only the first entries into the western canon they became the benchmark of literary excellence for all aspiring writers with ambitions of distinguished esteem. The legacy of Homer is inextricably intertwined with both epic poems. From the pain of Achilles on the plains of Troy to the epic voyage of Odysseus they will always be viewed through the lens of Homer.

Both poems are masterpieces that explore the human condition through the challenges of life highlighting the courage plumbed to face the pain of struggle against the odds. For the student, they are the first port of call to understand Greek culture and mythology. For the classicist they are the ultimate point of literary reference.

The Homeric Question in Academia

The clutches of academia has long held tight to the blind faith required to believe Homer to be the author of the two greatest poems of Greek antiquity. In the spirit of true poetic licence, a blind eye was turned for the visually challenged mythical poet who cannot be traced after centuries of historians attempting to uncover the truth behind the Homeric question.

By affording both the Iliad and the Odyssey an author, it renders a cognisant focus point for the minds eye. Without an author, the question of "who" could have overshadowed their actual stories. By naming Homer, the ancient Greeks claimed cultural certainty and calmed curiosity by quelling the "who" question and replacing it with the hunt for Homer conundrum.

Hope still springs eternal that an audacious archaeologist will dig up a tomb and cry eureka whilst clutching the unquestionable evidence that Homer was real and was the creator of these two Greek epics.

Percy Bysshe Shelley sensed the dawning of a literary awakening: "The poems of Homer and his contemporaries were the delight of infant Greece; they were the elements of that social system which is the column upon which all succeeding civilization has reposed. Homer embodied the ideal perfection of his age in human character"

Winston Churchill was never shy of mischief towards a political rival: "Mr Gladstone read Homer for fun, which I thought served him right"

Plato described him thus: "The first teacher and beginner of all these beauties of tragedy"

The Italian poet, Dante Alighieri, was unequivocal about his status: "Homer, the sovereign poet"

Aristotle shared this description: "It is Homer who has chiefly taught other poets the art of telling lies skilfully"

The poet and translator, Alexander Pope, held him in high esteem: "We acknowledge him the father of poetical diction, the first who taught that language of the gods to men"

The historian Adam Nicolson cast doubt on the Homeric credentials: "Homer is a foundation myth, not a man nor of the natural world, but of the way of thinking by which the Greeks defined themselves, the frame of mind which made them who they were"

Jean-Jacques Rousseau spoke of what he termed an echo of the sound to the sense: "Even the ancients had learned to admire the rhyming termination by which Homer faintly recalls the humming of the summer swarms"

Rousseau then went on to describe an attention to descriptive detail: "Both Homer and Virgil have imitated the rapid clatter of horses’ hoofs with equal felicity"

It is fair to say the English poet John Keats was inspired by the George Chapman translation of Homer: "Oft of one wide expanse had I been told that deep-browed Homer ruled as his demesne; Yet never did I breathe its pure serene till I heard Chapman speak out loud and bold: Then felt I like some watcher of the skies when a new planet swims into his ken"

An American philosopher, Ralph Waldo Emerson, cited Homer to lend meaning to his philosophical point: "A third illusion haunts us, that a long duration, as a year, a decade, a century, is valuable. But an old French sentence says, "God works in moments,"... We ask for long life, but 'tis deep life, or grand moments, that signify. Let the measure of time be spiritual, not mechanical. Life is unnecessarily long. Moments of insight, of fine personal relation, a smile, a glance, — what ample borrowers of eternity they are! Life culminates and concentrates; and Homer said, "The Gods ever give to mortals their appointed share of reason only on one day.""

The artist Rembrandt spoke of a sketch of the great poet: "I am also surprised that Your Lordship should complain as much about the price as about the canvas, but if Your Lordship wishes to return it as he did the sketch of Homer, I will do another"

The movie director Michelangelo Antonioni questioned our evolution with this analogy: "Scientific man is already on the moon, and yet we are still living with the moral concepts of Homer"

The dramatist, George Chapman, rated him highly: "Of all books extant in all kinds, Homer is the first and best"

The French historian, Voltaire, was less impressed: "The common part of mankind is awed with the fame of Homer, rather than struck with his beauties"

Voltaire later opined this view: "His gods are perhaps at once absurd and entertaining"

The classicist author Werner Jaeger talks of his legacy: "Plato tells us that in his time many believed that Homer was the educator of all Greece. Since then, Homer’s influence has spread far beyond the frontiers of Hellas [Greece]"

Socrates posed this question to his fellow Greeks: "But how did you come to have this skill about Homer only, and not about Hesiod or the other poets?" 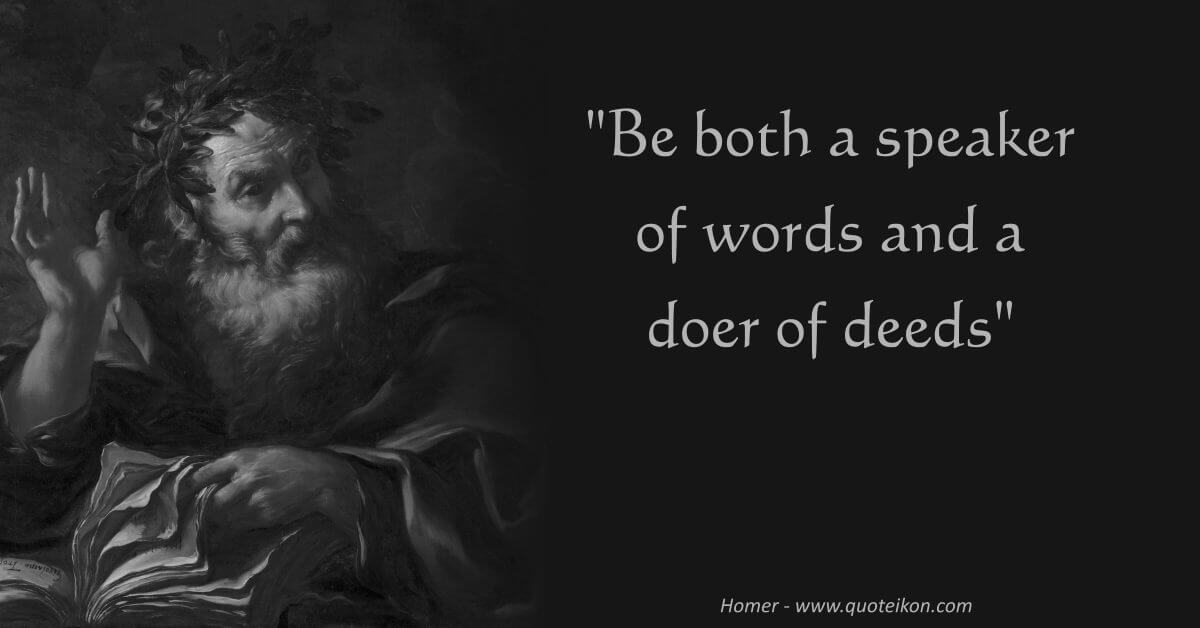