Rembrandt was born into the Dutch Golden Age which was a time of great prosperity with the opening of the first modern stock exchange in Amsterdam and multi national trading entities such as the Dutch East India Company ensuring an abundance of wealth and more importantly for the artistically inclined, an opportunity to satisfy the vanity of the gentry with commissioned portraits.

After impressing with his talent for art he was apprenticed for 3 years with Jacob van Swanenburgh and also learnt his trade from the Dutch painter Pieter Lastman until he finally made opened his first studio in 1625.

In an era of great art Rembrandt was quickly recognised as an exceptional artist and the highly influential Constantijn Huygens championed his cause earing him lucrative commissions with Dutch aristocracy and most notably the Prince of Orange Frederik Hendrik who purchased his paintings up until his death in 1647.

In the early 1630's, when it was becoming apparent his art was in demand, he changed his signature on his paintings to "Rembrandt" following in the style of Raphael and Leonardo Da Vinci by using his first name only in what was essentially a branding exercise as his many students all copied his art and it became important to distinguish between a real Rembrandt and a students rendition of the master.

To avoid bankruptcy in 1656 he sold off his extensive collection of artwork he acquired during his life, these included Japanese suits of armour, bust's of Roman emperors and old masters paintings. However the monies generated from the sales was disappointing and he was also forced to sell his house. He never got to really enjoy his success because no matter how much he earned he spent it all on his extravagant lifestyle and he eventually ended up bankrupt and died a poor man.

Rembrandt's legacy is a polar opposite of his financial wealth as he is recognised as one of the greatest visual artists of all time and the most prominent painter of the Dutch Golden Age that was a time of abundant artistic talent.

His use of light and shade in the chiaroscuro style of painting was breathtaking considering his palette was limited by 17th century standards, yet it earned him the greatest respect from a latter day giant of the art world Vincent Van Gogh as he was quoted as saying: "This is the essence of Rembrandt's genius. It's his sympathy for humankind which makes his art eternal".

Most Notable Works Of Art By Rembrandt

Through his life he created some 50 self portraits and a total body of works that exceeded 2000 pieces and in September 2015 two of his works came up for sale with the pendant portraits of Maerten Soolmans and and Oopjen Coppit selling for $180 million USD. Such a master of brush strokes he was also good for a one liner so this is my compilation of 15 of the best Rembrandt quotes

The influential Dutch poet Constantijn Huygens recognised his immense talent: "Rembrandt surpasses Lievens in the faculty of penetrating to the heart of his subject matter and bringing out its essence, and his works come across more vividly"

Francisco Goya on where he found artistic inspiration said: "I have had three masters, Nature, Velázquez, and Rembrandt"

Vincent van Gogh was moved to say: "Rembrandt is so deeply mysterious that he says things for which there are no words in any language. Rembrandt is truly called a magician... that's not an easy calling"

In 1889 Paul Gauguin gave a strange mention about Rembrandt in a letter to Vincent Van Gogh: "I know nothing about your drawing after Rembrandt which you were proposing to exchange with me" 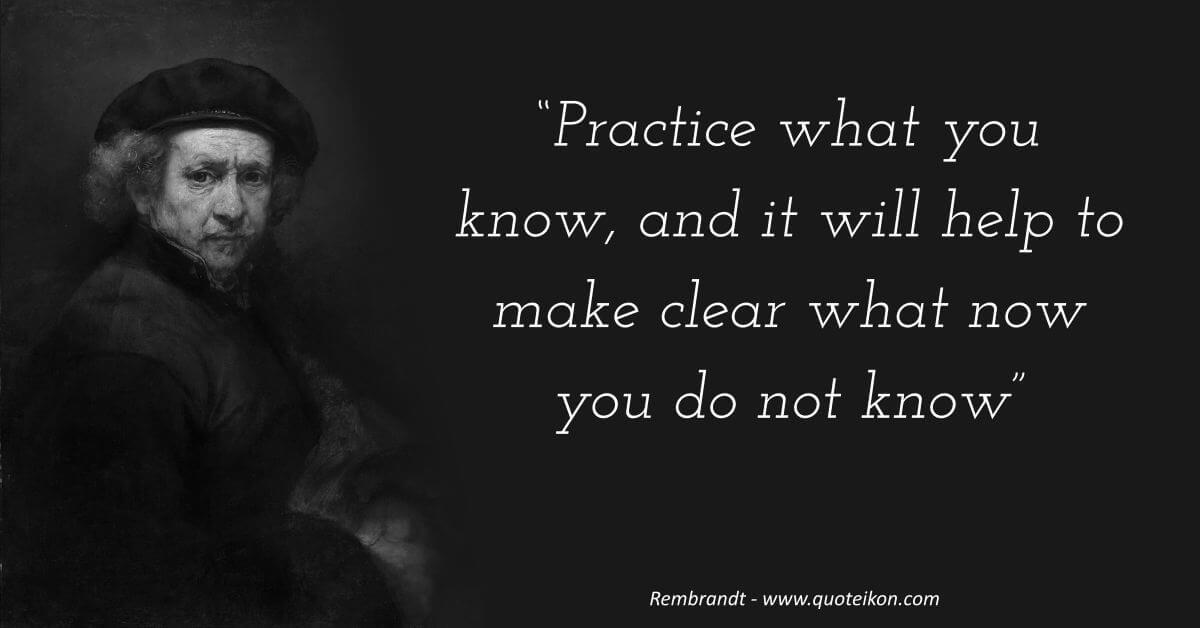