Telling hard truths has always been a thankless task, in the case of Niccolò Machiavelli it has bestowed upon him the word Machiavellian with all its negative associations referring to unscrupulous political values and questionable ethical scheming in a world where it seems the ends justifies the means, if successful of course.

Machiavelli was born to a family who were descendants of the old Marquesses of Tuscany and he lived in turbulent times in the city state of Florence that sat permanently on a war or appeasement footing due to the acquisitive threat of ambitious Papal power, the Holy Roman Empire, France and Spain who all looked upon the rich banking city with a covetous eye.

Growing up during the successful reign of Lorenzo de' Medici of the Medici banking dynasty, Niccolò lived through the artistic beauty of the Italian Renaissance, the 1478 Pazzi conspiracy which was an unsuccessful attempt to overthrow the House of Medici and the many wars and battles fought by the Florentine leader they called "The Magnificent". After the fall of the Medici family in 1493, Florence was ruled by a Dominican friar called Girolamo Savonarola who lasted four years and Machiavelli viewed him to be an incompetent, ill prepared and unarmed prophet who was doomed to fail from the outset.

Upon the ousting of Savonarola, Piero Soderini reestablished a republican government which engaged the services of Niccolò Machiavelli who was to rise to the position of Second Chancellor of the Florentine Republic. Niccolò travelled on diplomatic missions to the major European capitals and was given the task of upgrading the military might of the republic.

In 1512 the Medici family were back in town, under the leadership of Cardinal Giovanni de Medici, Solderini was removed from power and Machiavelli was forced out of his government office. Later Machiavelli was arrested and accused of conspiracy to topple the new government, he spent weeks being tortured but eventually the Medici's released him and absolved him of any wrong doing with the provision he retire from public life.

Machiavelli then retired to his home which he called L'Albergaccio at Sant'Andrea in Percussina where he became a prolific writer penning such classics as "The Prince" and "Discourses on Livy". Both these books were published posthumously and it is these works, predominantly "The Prince", that has shaped the legacy of Machiavelli. Both of these books were banned by the catholic church who viewed them as immoral and unethical, but banning books just just creates more interest in wanting to read the source of such ideology deemed unfit for human consumption.

Machiavelli drew his literary inspiration from a wide variety of sources including Aristotle, Dante Alighieri, Plato and Xenophon, but he also leaned heavily on personal experiences and events he had witnessed. "The Prince" was a political treatise covering different ways a 'new' prince can get into power and more importantly hold onto that power, it is a guide book for a potential leader to read. Machiavelli dispenses with the niceties and gets straight to the heart of a multitude of power play scenarios, he does it with a steely sincerity and the dishonourable duplicity of a man steeped in unethical experience, but above all he displayed an honesty not normally associated with such a dishonest subject matter.

Machiavelli cut through the politics of ethics depicting it to be an adornment used for show but not fit for purpose and he exposed the myth of moralistic politics revealing it to be impractical in real world situations. What Machiavelli wrote about was not original, it was a description of political machinations that had never been so explicitly explained before. His works are a hard boiled dissemination of the ideal political leader being someone who is not kind or honest but carries the characteristics of a cut throat prepared to engage in extreme measures to protect and enrich the state.

His forthright approach has invited heavy criticism and continues to spark debate some 500 years after he first put quill to parchment, Machiavelli was an honourable man whose name will ever be recognised as a by product of political skulduggery because he pointed out what it takes to be a successful ruler. He was the messenger and not the arch villain who actually carried out the dastardly deeds he so deliciously described. With his subject matter being so cunningly controversial his sayings now carry great meaning and he has left us some words of wisdom which I have compiled into this list of 26 of the best Niccolò Machiavelli quotes.

Jean-Jacques Rousseau shared this observation: "Machiavelli was an honorable man and a good citizen; but, attached to the house of the Medici, he was forced, during the oppression of his country, to conceal his love for liberty. The mere choice of his execrable hero sufficiently manifests his secret intention; and the opposition between the maxims of his book the Prince and those of his Discourses on Titus Livius and his History of Florence shows that this profound politician has had hitherto only superficial or corrupt readers. The court of Rome has strictly prohibited his book; I certainly believe it, for it is that court which he most clearly depicts"

Friedrich Nietzsche spoke of his leisure reading: "My vacation, my preference, my cure for all things Platonic has always been Thucydides. Thucydides, and perhaps Machiavelli's Principe are most closely related to me in terms of their unconditional will not to be fooled and to see reason in reality, - not in 'reason', and even less in ‘morality’."

Isaiah Berlin described him thus: "What has been shown by Machiavelli, who is often congratulated for tearing off hypocritical masks, brutally revealing the truth, and so on, is not that men profess one thing and do another but that when they assume that the two ideals are compatible, or perhaps are even one and the same ideal, and do not allow this assumption to be questioned, they are guilty of bad faith which their actual behavior exhibits. Machiavelli calls the bluff not just of official morality—the hypocrisies of ordinary life—but of one of the foundations of the central Western philosophical tradition, the belief in the ultimate compatibility of all genuine values"

Francis Bacon was impressed to say: "We are much beholden to Machiavelli and others, that write what men do, and not what they ought to do. For it is not possible to join serpentine wisdom with the columbine innocency, except men know exactly all the conditions of the serpent; his baseness and going upon his belly, his volubility and lubricity, his envy and sting, and the rest; that is, all forms and natures of evil. For without this, virtue lieth open and unfenced. Nay, an honest man can do no good upon those that are wicked, to reclaim them, without the help of the knowledge of evil"

Henry Kissinger was not so impressed with comparisons: "There is really very little of Machiavelli's one can accept or use in the contemporary world. The one thing I find interesting in Machiavelli is his estimate of the prince's will. Interesting, but not such as to influence me. If you want to know who has influenced me most, I'll answer with two philosophers' names: Spinoza and Kant. Which makes it all the more peculiar that you choose to associate me with Machiavelli"

Victor Hugo gave this assessment: "If one desires to learn at one blow, to what degree of hideousness the fact can attain, viewed at the distance of centuries, let him look at Machiavelli. Machiavelli is not an evil genius, nor a demon, nor a miserable and cowardly writer; he is nothing but the fact. And he is not only the Italian fact; he is the European fact, the fact of the sixteenth century. He seems hideous, and so he is, in the presence of the moral idea of the nineteenth"

Leo Strauss pondered upon his legacy: "The founder of modern political philosophy is Machiavelli. He tried to effect, and he did effect, a break with the whole tradition of political philosophy. He compared his achievement to that of men like Columbus. He claimed to have discovered a new moral continent. His claim is well founded; his political teaching is "wholly new." The only question is whether the new continent is fit for human habitation" 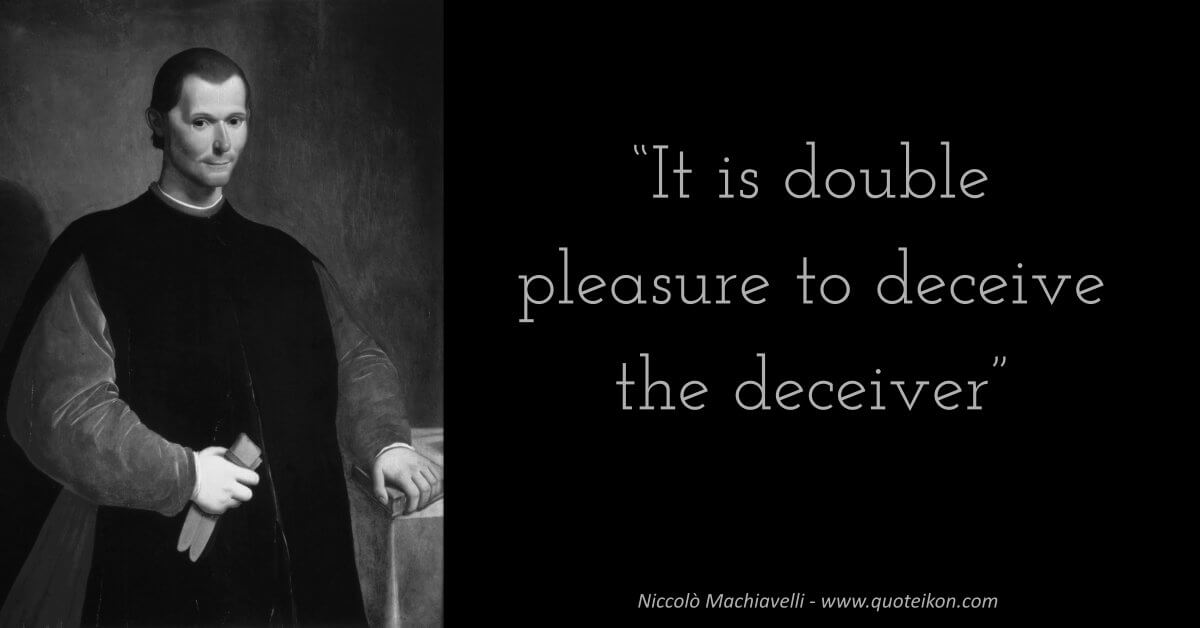