It was the golden age of Florentine art with Lorenzo de' Medici, known as the magnificent, holding the reins of power in Florence in a era encapsulated by the artistic influence of the Italian Renaissance sweeping the peninsula. Lorenzo was inspired by poetry and the arts and he held a great passion for the beautification of Florence which he encouraged by sponsoring the great artists of the day including Botticelli and Michelangelo.

Lorenzo was the brightest of the five Medici children and upon the death of his father Piero he assumed control of the Republic of Florence with his younger brother Giuliano, with the latter taking a back seat. Lorenzo was just twenty years old when he became the head of the House Of Medici which was a Florentine banking dynasty that made success by combined money lending with political power.

The new Florentine ruler wasted little time in stamping his mark as he reformed state institutions to give himself more power and the people less political freedom, essentially he became a despot, albeit a benevolent despot who cared for and made sure he took good care of his people. This kept the vast majority in the republic happy bar the ambitious few who decided they wanted to overthrow the house of Medici and assume control themselves, this manifested itself with the Pazzi conspiracy which occurred in 1478.

During Easter mass on 26th April 1478 the Pazzi Conspirators including Francesco Salviati the Archbishop of Pisa who was given the blessing of Pope Sixtus IV, attacked Lorenzo and his brother Giuliano in the Cathedral of Santa Maria del Fiore. Giuliano died in the attack but Lorenzo escaped with flesh wounds as supporters including the poet Poliziano rushed to his aid. The assassination attempt failed and the Pazzi conspirators headed by Girolamo Riario and Francesco Pazzi were killed by the baying mob whilst the archbishop was lynched and hanged from a window of the Palazzo Vecchio.

Pope Sixtus IV was seething at the failure to overthrow Lorenzo and sought a military alliance with King Ferdinand I of Naples which led to an invasion of the Republic of Florence and a war. With no end to the conflict in sight Lorenzo chose diplomacy and ventured boldly to Naples to discuss a truce and resolve the issues with King Ferdinand I. The king, taken aback by the valour of Lorenzo, kept him prisoner for some months but eventually came to an agreement with the Florentine ruler, released him and agreed to the ending of hostilities. This was a major diplomatic victory for Lorenzo who succeeded in sidelining the Pope giving the pontiff no choice but to abide by the truce and accept Lorenzo as the ruler of Florence.

This victory gave Lorenzo de' Medici tremendous leverage, Europe's elite looked upon his triumph as a step to becoming a sovereign state but the Florentine ruler preferred to be seen as an ordinary citizen without the trappings of royal privilege. He did amend the constitution to give himself more power but he still maintained the respect of the people through fair policies, he also concentrated in maintaining the peace between the states on the Italian peninsular with an eye to discourage France and the Holy Roman Empire from expanding their power base into Italy.

Lorenzo de' Medici was the Florentine ruler whose people lauded him as "The Magnificent", he fought wars, brokered peace and became one of the biggest patrons to the arts during the Italian Renaissance. He was an accomplished writer of songs and poetry who had a sharp wit and an eye for artistic beauty, he was also a great orator who inspired the Republic with his words of wisdom that I have used to compile this list of 22 of the best Lorenzo de' Medici quotes.

The Florentine artist Michelangelo gave this brief description: "Lorenzo shepherd, who pastures his flocks and herds on the banks of the Arno"

The philosopher Niccolò Machiavelli tried to share some sage advice: "The Medici government would only weaken itself by attacking a man who is in exile and cannot harm it"

The historian Edward Armstrong gave this assessment: "Lorenzo the Magnificent was so often declared a mystery ... In reality, few natures have been less mysterious than his. He was a completely natural man, with a mind singularly open to the influence of circumstances. And just as his intellect was versatile, so his character was receptive. He possessed in abundance those virtues "of giving and receiving" that power of communicating to others the gift of "sympathy" which for Italians means much more than the corresponding English word means. Lorenzo was natural and devoid of affectation"

Upon his death the councils of Florence issued this edict: "Whereas the foremost man of all this city, the lately deceased Lorenzo de' Medici, did, during his whole life, neglect no opportunity of protecting, increasing, adorning and raising this city, but was always ready with counsel, authority and painstaking, in thought and deed; shrank from neither trouble nor danger for the good of the state and its freedom..... it has seemed good to the Senate and people of Florence.... to establish a public testimonial of gratitude to the memory of such a man, in order that virtue might not be unhonoured among Florentines, and that, in days to come, other citizens may be incited to serve the commonwealth with might and wisdom" 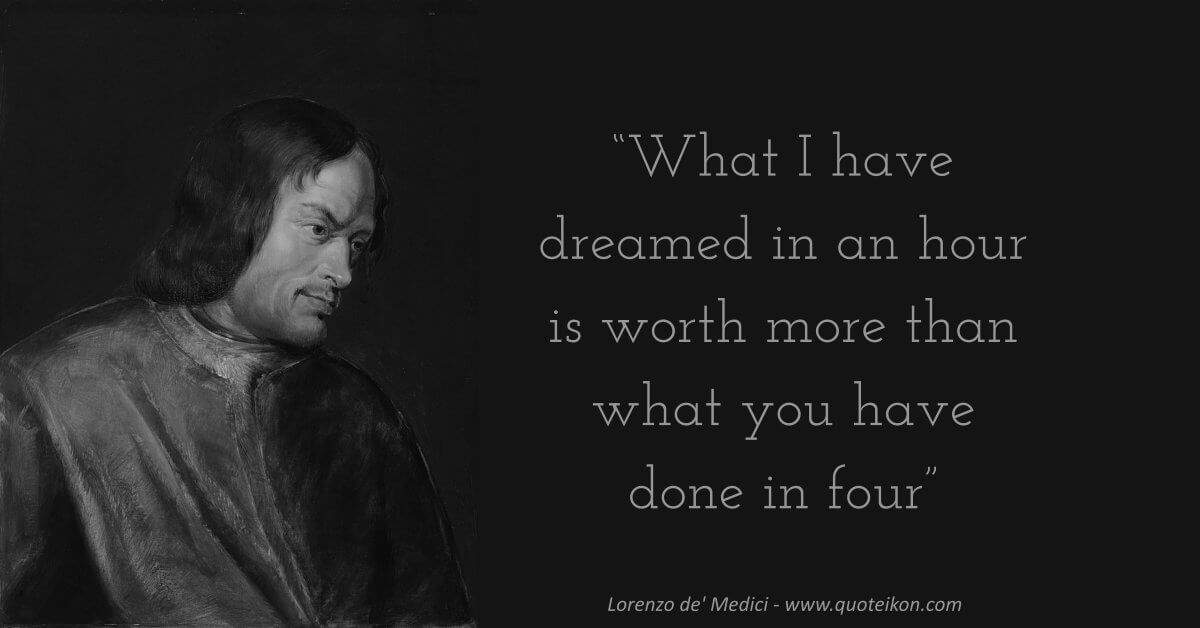