Francis Bacon was the philosopher who dared to look beyond the Aristotelian method of deductive reasoning and introduced the scientific method of investigation into natural phenomena that marked the beginning of the scientific revolution.

He grew frustrated with academia's acceptance of logical deduction and rallied against the 2,000 year old ancient Greek natural philosophy of Aristotle with Bacon stating that information should be gathered and its data analysed through experimentation and observation which will give a repeatable model of proof behind any theory.

The Bacon model was inductive methodology that required extensive testing of an hypothesis by using a process of measurement, observation and experimentation to yield results that can be used to refine the hypothesis, as needed, to a proven scientific conclusion.

His scientific output was huge and although it did not produce any ground breaking results it did provide the guidelines for how experimentation should be conducted. What is now known as the Baconian method would lead to a new wave of scientists making remarkable discoveries such as Robert Boyle who employed his inductive methodology to dispel the hitherto practiced alchemy and create a new field of science called chemistry.

Despite Bacon's rich contribution to science he spent most of his working life devoted to public service, he was trained as a lawyer and at the relatively young age of 20 he became a member of parliament for the seat of Bossiney in Cornwall. His career made slow progress until King James ascended to the throne of England as his coronation coincided with Bacon successfully climbing the greasy pole of political power. He was knighted in 1603 and took the office of solicitor general in 1607. In 1613 Bacon was appointed as the attorney general and by 1618 he achieved his highest office as the Lord High Chancellor of Great Britain.

The publication of his greatest philosophical work Novum Organum in 1620 saw Bacon reach the apex of his career but before the celebratory dust had settled he was accused of corruption and charged with accepting bribes. For all his academic and parliamentary successes he was not blessed with any personal monetary sense as he was seemingly in perpetual debt during his adult life which finally caught him with him in 1621. He admitted the charges and received a heavy fine and imprisonment in the Tower of London. Bacon was fortunate that the king pardoned him of the prison sentence and fine but he was banished from holding any parliamentary position and resigned himself to his Hertfordshire home where he continued to write until his death in 1626.

The significance of his work is still felt today as modern science is based on the scientific method he wrote back in the 17th century. Bacon's legacy of philosophical writing influenced the Age of Enlightenment and spurred the scientific revolution through the subsequent centuries. As an eminent man of science his meaningful words carried influence and helped me to create this compilation of 30 of the best Francis Bacon quotes.

The 3rd U.S. President Thomas Jefferson made this bold statement: "Bacon, Locke and Newton. I consider them as the three greatest men that have ever lived, without any exception, and as having laid the foundation of those superstructures which have been raised in the Physical and Moral sciences"

The physicist Thomas Young was impressed to say: "Bacon first taught the world the true method of the study of nature, and rescued science from that barbarism in which the followers of Aristotle, by a too servile imitation of their master, had involved it"

The historian Will Durant shared this observation: "His achievement was not the less great because it was indirect. His philosophical works, though little read now, “moved the intellects which moved the world.” He made himself the eloquent voice of the optimism and resolution of the Renaissance. Never was any man so great a stimulus to other thinkers… The whole tenor and career of British thought have followed the philosophy of Bacon"

The philosopher George Henry Lewes gave this assessment: "Since... it appears that Aristotle very distinctly recognized the cardinal principles of the Baconian philosophy, why... has the world credited Bacon with a great reform in the very attacks he made on Aristotle? The answer is simple. Bacon did not attack the Method which Aristotle taught; indeed, he was very imperfectly acquainted with it. He attacked the Method which the followers of Aristotle practised"

The author Max Horkheimer made this comparison: "For Bacon as for Luther, “knowledge that tendeth but to satisfaction, is but as a courtesan, which is for pleasure, and not for fruit or generation.” Its concern is not “satisfaction, which men call truth,” but “operation,” the effective procedure. The “true end, scope or office of knowledge” does not consist in “any plausible, delectable, reverend or admired discourse, or any satisfactory arguments, but in effecting and working, and in discovery of particulars not revealed before, for the better endowment and help of man’s life.” There shall be neither mystery nor any desire to reveal mystery"

The author Clifford D. Conner summed him up thus: "The "Baconian" sciences were the kind Francis Bacon had in mind when he issued a call to revitalize science by basing it on craftsmen's knowledge of nature. Bacon is remembered as the most effective critic of the traditional learning promulgated the elite institutions of his day. ...Bacon advocated compiling a "history of arts," or encyclopedia of crafts knowledge"

The scientist David Brewster reminded us that science always prevails: "If Bacon had never lived, the student of nature would have found in the writings and labours of Galileo, not only the boasted principles of the inductive philosophy, but also their practical application to the highest efforts of invention and discovery" 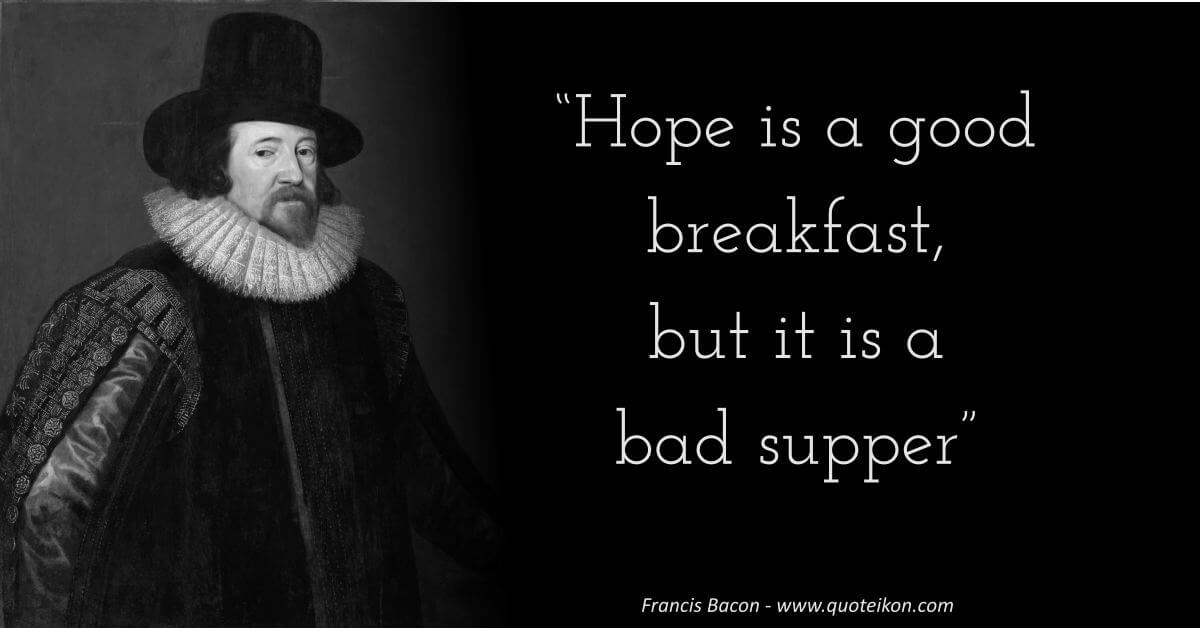