Friedrich Nietzsche was the iconoclastic self styled philosopher of the hammer. His reputation has been shredded on the proverbial guillotine of public opinion for the high crime of his work being misunderstood through literary misrepresentation leading to intended misinterpretation to achieve controversial political objectives.

Contrary to popular belief he was neither a misogynist or a right wing zealot. In 1874, from his position as professor of philology, his campaign to allow women to be admitted to the University of Basel was defeated. He planned, in the spirit of free thinking, to set up a philosophical school in Sorrento with the feminist campaigner Malwida von Meysenbug. Nietzsche also backed the women’s suffrage movement with his support to his feminist friends Meta von Salis-Marschlins and Resa von Schirnhofer.

The inconveniences of truth seldom fare well when there is political mileage to be gained. Such was the fate of the literary archive of Friedrich Nietzsche as he was the victim of selective plagiarism to achieve an ideological justification for vested interests.

The infamous political dictatorships of Mussolini, Stalin and especially Hitler all took selective inspiration from his works. The Nazi's used some of his famous maxims like: "will to power", "the blond beast" and "übermensch" which was frequently adopted by Hitler to refer to the superior "Aryan race". Indeed Hitler even gave Mussolini a copy of Nietzche's work, albeit a doctored version, for his birthday.

Because of Nietzche's association with influencing the Nazi's he received a strong wave of criticism post WW2. Although his vilification was understandable in wake of the horrors of the Holocaust, he was far from an anti-semitic nationalist believer in the Aryan race. As far back as the days of Otto von Bismarck, Nietzsche was more nihilistic than nationalistic. He even criticised the nihilists. Nietzche also condemned all forms of racism including anti-semitism and was even quoted as saying: "Have nothing to do with a person who takes part in the dishonest race swindle".

The beauty of the writing of Friedrich Nietzsche is his openness of phrase. The aphoristic wisdom he conveyed was strong and compelling. However he also left it open to interpretation, which in the hands of fascist theorists was manipulated for political gain.

But for his works to be taken seriously as a fascist doctrine they needed to be altered. That duty lay with his sister Elizabeth Förster-Nietzsche who edited her brother's writing after he fell ill. Friedrich had suffered a complete mental breakdown in 1889. Friends and family took care of the philosopher until his sister Elizabeth returned from a failed white supremicist colony in Panama. Her husband, Bernhard Förster who founded the colony, had committed suicide leaving Elizabeth with little choice but to return home in 1893.

Friedrich and Elizabeth did not always see eye to eye. Years earlier he refused to attend her wedding because of the racist views of her future husband Bernhard. Yet she took up the challenge to take care of her brothers well being until his death in August 1900. More importantly she now had access to his archives which she began to read studiously.

Elizabeth, who had been indoctrinated by her husband, was a staunch anti-semite. It wasn't long before she was removing and editing whole sentences from new editions of Friedrich's books: "The Will to Power" and "Beyond Good and Evil".

She also portrayed many of his maxims to give a more favourable German nationalistic effect. The doctored book editions by Elizabeth sold well. They had a captive audience in right wing enthusiasts looking to add academic justification to their bigoted views.

Elizabeth was the chief architect of her brothers sullied reputation as a fascist leaning anti-semite. Although many of the falsifications were corrected in later editions of his books, the character assassination he suffered still lingered waiting for history to deliver its final judgement on his contribution to philosophy.

Friedrich Nietzsche understood the motivations inside the human mind. In an ironic twist of premonitory injustice, he gave a perceptive glimpse of what could be if his body of work fell into the wrong hands when he wrote: "I am frightened, by the thought of what unqualified and unsuitable people may invoke my authority one day. Yet that is the torment of every teacher … he knows that, given the circumstances and accidents, he can become a disaster as well as a blessing to mankind"

Friedrich Nietzsche was not a typical learned philosopher but one who drew inspiration from a variety of sources as diverse as Ralph Waldo Emerson to Richard Wagner and Charles Baudelaire to Charles Darwin. He studied Arthur Schopenhauer and Friedrich Albert Lange as he looked to expand the breadth of his wisdom which eventually led to a crescendo of his best works. Nietzsche was inspired for a decade of grand literary output as he published 10 books from 1878 up to 1888. This also happened to be his last year of writing before he was overwhelmed by illness.

The philosophy of Nietzsche was both groundbreaking and stimulating to the mind. His concept of "the will to power" took Schopenhauer's theory of "the will to live" one step further as he opined that people were prepared to take risks to the point of overriding the will to live if it meant the betterment of their life.

In a similar vein Nietzsche wrote "what does not kill me, makes me stronger" whereby he cultivated the thought process of advancement through adversity.

During his later working life Nietzsche was shunned by the academic establishment who viewed his writing as too controversial to include in any syllabus. His posthumous legacy has been a roller coaster ride of philosophical adulation mixed with wholesale condemnation and although Nietzsche's reputation is steadily improving he is still considered controversial in some quarters.

One thing that cannot be taken away from this great German philosopher are his mindful, manicured maxims. He has bequeathed the world a plethora of delightful quips to ponder. Who could forget such classics as: "Morality is herd instinct in the individual"? Or "The tree that would grow to heaven must send its roots to hell"?

There were many more which has helped me to produce this compilation of 35 of the finest Friedrich Nietzsche quotes.

The psychoanalyst Sigmund Freud was impressed to say: "The degree of introspection achieved by Nietzsche had never been achieved by anyone, nor is it ever likely to be achieved again"

The philosopher Bertrand Russell was not a fan: "I dislike Nietzsche because he likes the contemplation of pain, because he erects conceit into a duty, because the men whom he most admires are conquerors, whose glory is cleverness in causing men to die"

The author Colin Wilson gave this assessment: "Nietzsche was used to being alone. He regarded it as being part of destiny of the man of genius. His hero, Schopenhauer, convinced him of it when he was barely twenty, and although he came later to reject Schopenhauer, he never rebelled against his destiny of aloneness"

The philosopher Walter Kaufmann shared this observation: "Nietzsche was the first major German philosopher who was not strongly influenced by Kant. Like Hegel and many other German philosophers, he was steeped in Goethe, but he was free of the fateful compulsion to reconcile Goethe with Kant"

The Nobel Prize winning psychiatrist Eric Kandel talked of his influence: "The realization that our mental functioning is largely irrational was arrived at by several thinkers at the same time, including Friedrich Nietzsche, ... Freud, who was much influenced by both Darwin and Nietzsche ... was its most profound and articulate exponent"

The psychiatrist Christian Niemeyer spoke of sibling betrayal: "Förster-Nietzsche did everything she could - such as telling stories about Nietzsche, writing false letters in the name of her brother, and so on - to make it seem that Nietzsche had been a right-wing thinker like herself. It was she who created the most destructive myth of all: Nietzsche as the godfather of fascism"

The Russian scholar Micha Josef Berdyczewski called out his paradoxical philosophy: "Nietzsche’s greatness is that he always contradicts himself, and usually he is right" 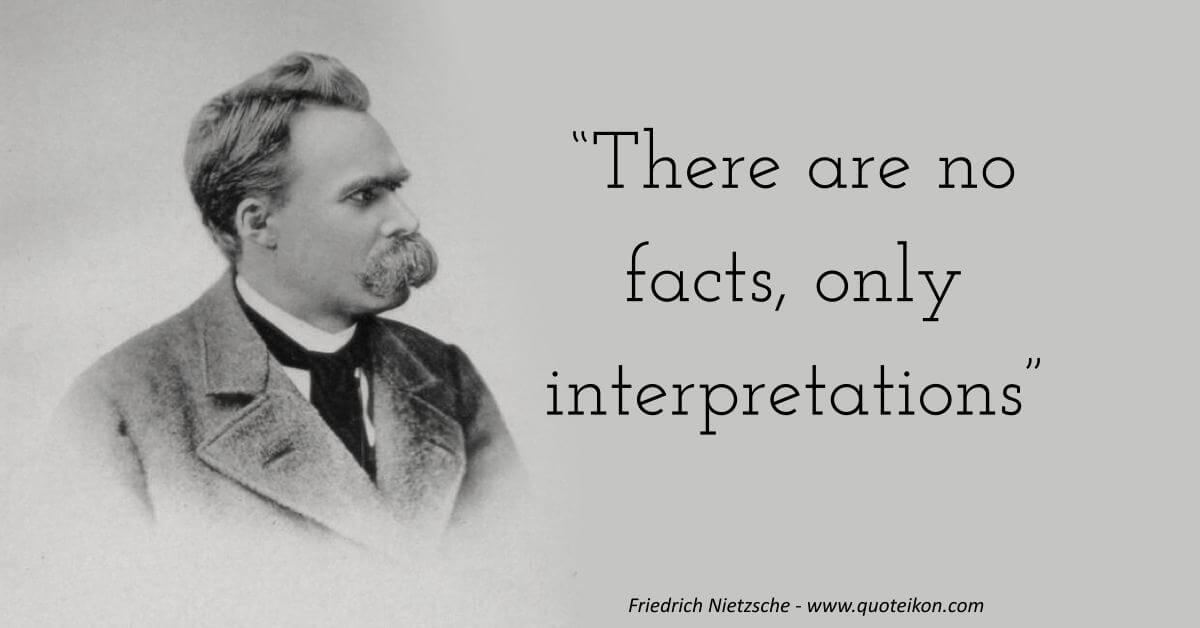