Christopher Columbus was the Italian adventurer who dared to discover a new route to Asia by heading west across the Atlantic instead of south and around the African Cape of Good Hope. He lobbied the great courts of Portugal, England and France who all refused to finance his proposed venture so he turned to Spain where he convinced King Ferdinand and Queen Isabella to sponsor his expedition west to find the east coast of Asia.

Columbus was given a fleet of three ships: the Santa Maria, the Pinta and the Niña and so he set sail on 3rd August 1492 on an epic voyage that would have more impact on the world than any other voyage in history. He was not the first European to cross the Atlantic and set foot on the lands 2,000 miles west of The Azores as the Vikings had done this 500 years earlier with Leif Eriksson landing in Newfoundland.

The big difference with Columbus was he was there for fame and fortune and that meant colonisation for his sponsors in Spain who were looking for a big return on their investment in the form of trading profits at the expense of the indigenous peoples. After sighting land on 12th October he set foot on what is believed to be one of the Bahamian Islands. He sailed on to discover more islands in what is now known as the Caribbean until his triumphant return back to Spain where he was rewarded with the post of "Admiral of the Seven Seas" and the "Governor and Viceroy of the Indies".

Further expeditions followed widening the sphere of influence the Spanish were gaining but there was still no site of the east Asian coast. Nonetheless he set up colonies where he enslaved the indigenous populations and set up mines where they were forced to work. The Spanish brought weapons to ensure their superiority and quelled any insurrections with the steel of the spear and sword.

They had the might of cannons, guns and their Christian god backing their new regime but it was brutally mismanaged and together with the European diseases the natives had no natural immunity to, they completed a near genocide in the ill-fated Hispaniola (present-day Haiti and the Dominican Republic).

The Columbus blueprint paved the way for the conquistadors to ravage and rape the Americas with Hernán Cortés conquering the Aztec Empire and Francisco Pizarro laying waste to the Empire of the Inca's all in the name of fortune and riches at the expense of the local peoples lives. His legacy is a blood stained gold and silver monument to the greed and ruthless ambitions of the human mind believing success and happiness can only be measured in material wealth.

In between his lust for colonisation he did speak some memorable words, so this is my compilation of 15 of the best Christopher Columbus quotes

The academic Edmund Arthur Helps described him thus: "Columbus had all the spirit of a crusader, and, at the same time, the investigating nature of a modern man of science"

The historian Martin Dugard summed up his accomplishments with this description: "Columbus's claim to fame isn't that he got there first, it's that he stayed"

Historian James W. Loewen speculated that: "Columbus not only sent the first slaves across the Atlantic, he probably sent more slaves than any other individual"

Harvard historian Samuel Eliot Morison reflected painfully on his legacy: "The cruel policy initiated by Columbus and pursued by his successors resulted in complete genocide" 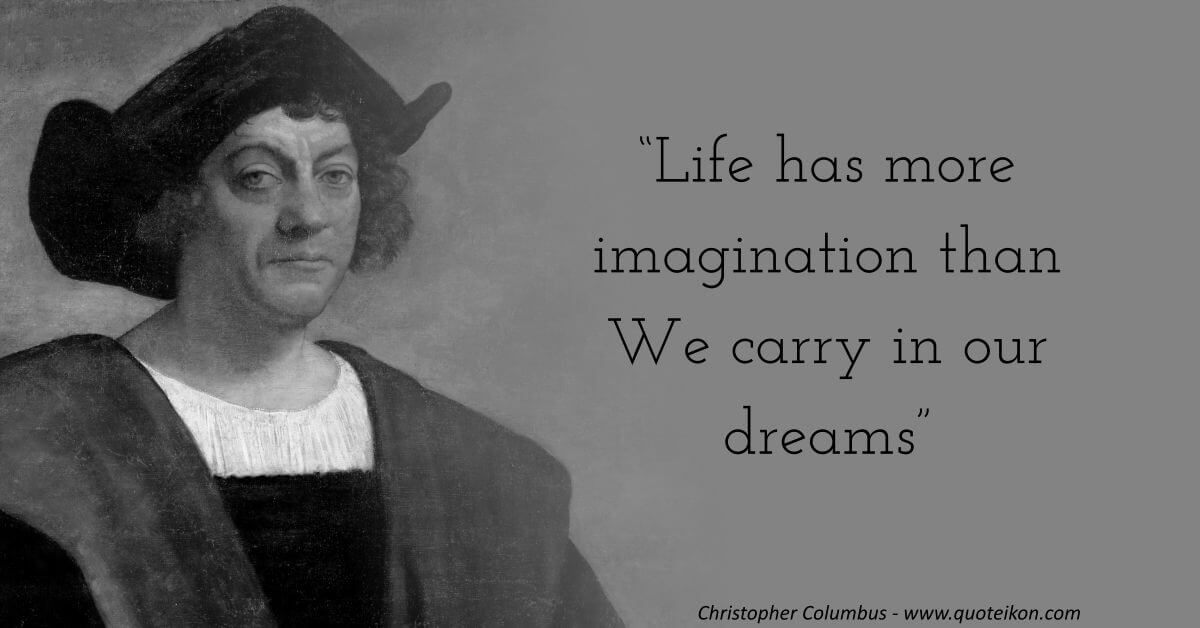