Thomas Hobbes - The Philosopher of Controversy

A debt of gratitude can only be paid in meaningful words to the architects of western philosophy that have shaped the world we now live in. The seeds of philosophy sown by Aristotle and Plato permeated into offshoots of thought that became the pillars Western philosophy so ably abetted by giants of their day such as Niccolo Machiavelli, René Descartes and Roger Bacon.

Thomas Hobbes was inspired by all these great men to sow a seed of his own thinking that grew into a branch of political philosophy that shook the world and guaranteed him his place in the pantheon of philosophical greats.

His 1651 publication of Leviathan was controversial. It drew scathing attacks and gained Hobbes an army of critics whose sharpened quills incised their parchment with partisan views that suited their political or religious narratives.

Although Thomas Hobbes was an absolutist about sovereignty, the royalists attacked his philosophical treatise on the premise of self preservation. The English civil war was in its closing stages and with King Charles I having had his head chopped off the remaining royalists were understandably nervous about supporting a writer that promoted absolute monarchy. The parliamentarians, who were winning the civil war and carried out the kings execution, were outraged by both the premise and the timing of Leviathan's publication whilst the Church felt a bit miffed because Hobbes asserted that their god and the authority of the church must be subservient to the state.

Pretty much any entity with a vested interest in maintaining their power or prestige attacked this newly-found Hobbesian treatise which virtually guaranteed it huge sales that publishers struggled to service in an environment of political outrage towards its content.

Previous to this, Hobbes fled England for France in 1640 as the clouds of civil war were gathering and he sensed his safety was not assured in the rising cauldron of political rhetoric. He remained in Gallic exile until he published Leviathan in 1651 and, much to his dismay, became a persona non-grata and returned to England before the authorities reacted to religious pressure and the full force of French law felt his collar.

Back in Blighty, Hobbes became a low key peripheral figure trying to blend into a society unappreciative towards a man of critical thinking fearing accusations of heresy and treason.

The parliamentarians may have won the war, but the challenge now was to maintain the peace. In 1660 Charles II was restored to a throne of symbolic value without the teeth of previous monarchs. This however was significant for Thomas Hobbes because he was Charles II educator whilst they were both in French exile. This development gave Hobbes more flexibility although he never again published any controversial books related to human behaviour or conflict avoidance.

The legacy of Thomas Hobbes is the ideological introduction of social contract theory to be agreed by a people who endorse the leadership of a central authority.

Hobbes analysis of the state of nature left him horrified by the chilling chaos ungoverned men would inflict upon each other. He bequeathed a political philosophy, which at the time, was too intriguing to ignore yet too pernicious to profess. His book Leviathan came under the heretical scrutiny of the church and incurred a political narrative to discredit Hobbes.

The critical spotlight of outrage encouraged learned men to read his works. Those with an agenda would learn from his writing and use it to further their own narratives. However, the polar opposite of inspiration would reverberate throughout the globe in the coming centuries.

Hobbes laid the foundation framework for the social contract and civil society. This baton of inspiration was then taken up by John Locke in England, Jean-Jacques Rousseau in France and Europe whilst the Founding Fathers of the American States delved deeply into the philosophy of Thomas Hobbes when writing their constitution.

Thomas Hobbes paid the price of pioneering literature that branded him with a symbol of notoriety with a lasting legacy that deserves more credit than history has served him so far.

An American philosopher, John Rawls, spoke enthusiastically of his legacy: "Hobbes's Leviathan is the greatest single work of political thought in the English language"

The Bishop of Chichester, Brian Duppa wrote in a 1651 letter to a royalist politician called Justinian Isham petitioning about his book pointing out that: "there is another production in the press, that Affrick hath not seen a greater monster, and that is Mr Hobbes his Leviathan; a title that I wondered at first"

The Scottish writer Alexander Ross’s shared this colloquial critique of Leviathan: "I finde him a man of excellent parts, and in this book much gold, and withal much dross; he hath mingled his wine with too much water, and imbittered his pottage with too much Coloquintida"

A prominent theologian and future Archbishop of Canterbury Thomas Tenison revealed in 1670 his suspicions of Hobbes being duplicitous in religious sincerity: "By this argument, unwary men may be, perhaps, deceived into a good opinion of your Philosophy; as if by the aids of it, you were no weak defender of natural Religion"

John Owen was a nonconformist theologian who gave Leviathan a good review by calling it a: "booke ye most full of excellent remarques of any"

The Swiss philosopher, Jean-Jacques Rousseau, made this revealing comparison: "The reasoning of Caligula agrees with that of Hobbes and Grotius"

The historian Will Durrant made this observation: "Hobbes believed, individuals and families, before the coming of social organization, had lived in a condition of perpetual war, actual or potential"

Durrant later shared this cognitive moment about the author Jonathan Swift: "Swift had read Hobbes, an experience not easily forgotten"

A cognitive scientist, Daniel Dennett, described him as a man before his time: "Thomas Hobbes was the first sociobiologist, two hundred years before Darwin"

Lisa Jardine, a Professor of Renaissance Studies, described him thus: "Hobbes was a royalist and felt a monarchy to be the ideal leviathan but he was attacked by other royalists for undermining the divine right of Kings which claimed that kingly authority derived from God. For Hobbes, authority ultimate derived from the people"

The writer Robert McCrum pondered what inspired his pragmatism: "Throughout his long life, Hobbes was never far either from the jeopardy of the times (notably the thirty years’ war and the English civil war) or the jeopardy sponsored by the brooding realism and pragmatic clarity of his philosophy. What, asked Hobbes, was the form of politics that would provide the security that he and his contemporaries longed for, but were always denied?"

An eminent anthropologist, Thomas Henry Huxley, shared this interesting reiteration: "If I may paraphrase Hobbes's well-known aphorism, I would say that books are the money of Literature, but only the counters of Science"

The philosopher Edwin Arthur Burtt recognised his contribution to history: "Our current conception of mathematics as an ideal science, of geometry in particular as dealing with an ideal space, rather than the actual space in which the universe is set, was a notion quite unformulated before Hobbes, and not taken seriously till the middle of the eighteenth century, though it was dimly felt after by a few Aristotelian opponents of Copernicus"

The psychologist Mary Whiton Calkins shared this observation: "The bitterest of all quarrels was that in which Hobbes sought to defend himself against the accusations of atheistic and immoral teaching which haunted him throughout his life and persisted for decades after his death"

Mary Whiton Calkins concluded with this assessment: "Hobbes was unfairly treated; his reputation suffered unjustly; and—more unfortunate than all—the suspicion of his atheism kept people from the study of his vigorous metaphysics and his acute psychology"

The philosopher and writer John Aubrey noted his inner humbleness: "He had read much, if one considers his long life; but his contemplation was much more than his reading. He was wont to say that if he had read as much as other men he should have known no more than other men"

The author Christopher Hitchens was impressed to say: "Hobbe's command of both holy scripture and the English language is quite breathtaking. He also reminds us of how perilous it was, and always has been, even to think about these things"

A respected political theorist, Robert A. Dahl, pondered the historical influence of two successful authors: "Perhaps the most influential book ever written on the characteristics of men in politics is The Prince, by the great Renaissance Italian Nicolo Machiavelli. Despite its enduring popularity, fascination, and authority it is extremely one-sided and unsystematic. … More systematic in its treatment of political man than The Prince, though about equally one-sided, is Hobbes' first section of The Leviathan entitled “Of Man.” Hobbes' psychological assumptions bear a remarkable resemblance to the modern school of psychology often called Behaviorism"

The English historian John Richard Green summed him up thus: "Hobbes was the first great English writer who dealt with the science of government from the ground, not of tradition, but of reason"

An Austrian economist, Friedrich Hayek, disagreed with some of his theories: "The primitive individualism described by Thomas Hobbes is hence a myth. The savage is not solitary, and his instinct is collectivist. There was never a war of all against all"

The philosopher Alfred Edward Taylor shared this assessment: "When Hobbes entered the University as a lad, the sham Aristotelianism of the Middle Ages was still officially taught in its lecture-rooms; before he died, mechanical science had been placed on a secure footing by Kepler, Galileo, and Descartes, the foundations of the scientific study of physiology and magnetism had been laid by Harvey and Gilbert, the Royal Society for experimental research into nature had been incorporated for more than a generation, analytical geometry had been created by Descartes, and the calculus by Leibniz and Newton, while it was only eight years after his death that the final exposition of the new mechanical conception of the universe was given by Newton's Principia"

A.E. Taylor went on to say: "When his absolutist political theories had been fully developed, he wished it to be believed that his real object had been to warn Englishmen against the dangers of democracy, by showing them how much wiser a single great statesman is than a multitude" 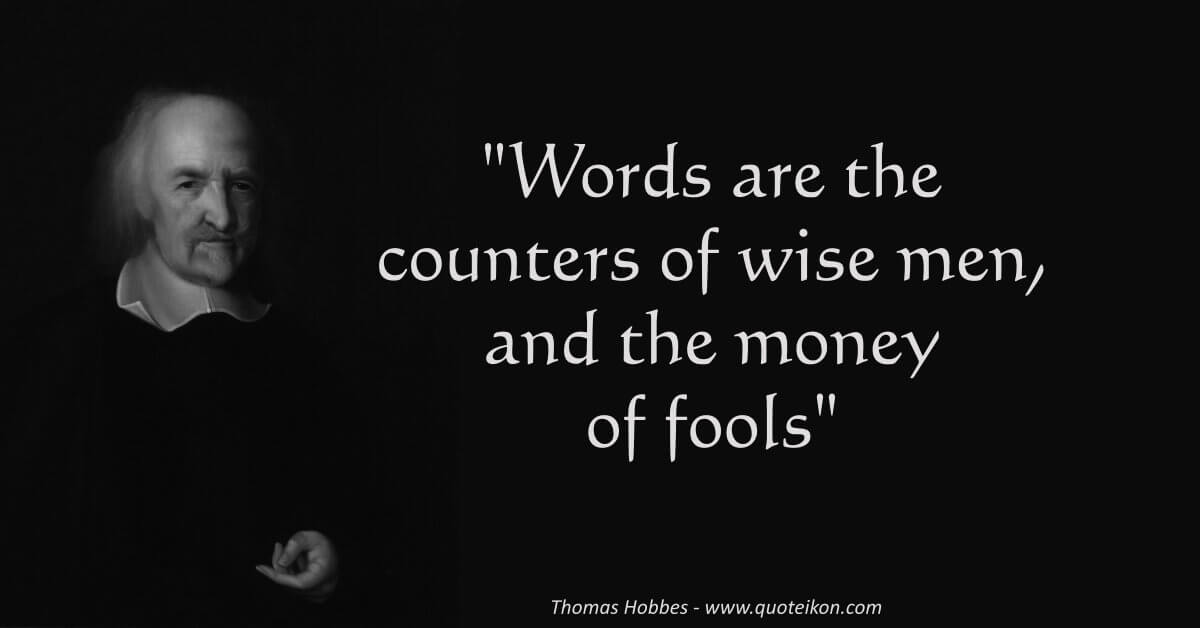