He is often regarded as the father of modern philosophy. Peer acclaimed as a brilliant mathematician whilst his scientific mind brought insightful meaning to the world of thinking. His name is Rene Descartes, the philosophical genius who doubted his way to certainty.

Few men have inspired the world like Descartes. The seeds of the scientific revolution grew strong from the inkwell of his mind and influenced the best of the enlightenment era as Blaise Pascal, Christiaan Huygens, Gottfried Wilhelm Leibniz, Isaac Newton and John Locke could all testify.

The Descartes sphere of influence does not end there as every generation of subsequent philosophers has considered his school of thought from Kant to Kepller or Nietzsche to Neurath or Spinoza to Schopenhauer or Voltaire to Vogt, they all found inspiration from Descartes work.

The method of doubt, also known as the Cartesian Method, was the tool Descartes devised in order to find certainty in any accepted truth. This involves methodically doubting everything until all that remains is an incontestable truth.

Scepticism towards any knowledge was present during Descartes education. However, he found issue with philosophical scepticism that only went as far as questioning the possibility of certainty.

Rene felt ill at ease with contemporary philosophy. The leeway allowed to unquestionable truths inspired him to develop his own philosophy. He stripped bare the layers of long held assumptions until all that remained was certainty.

Descartes questioned everything. His initial conclusions gave him his irrefutable platform to base his thinking which he summed up with the famous quote: "I think, therefore I am". This became his bedrock, the ultimate result of his doubting self. Using human self-consciousness to identify truths would reverberate through the era of enlightenment and beyond.

Logical analysis was no longer sufficient for Descartes. In his 1637 publication; "Discourse on the Method", Rene went into the details of how to eliminate ambiguity and arrive at indubitable truths. He shared his roadmap with four main pointers to clarity what is truth:

He realised that for specific cases the rules on their own would be inadequate. Therefore, Descartes included a set of examples showing how to apply the rules to real life scientific problems. He also invented what we know as analytic geometry as he saw a need to break down geometric challenges to algebraic ones to achieve certain mathematical resolutions.

Despite introducing a revolutionary form of rational philosophy, Rene recognised that reliance on authority was a political or religious means to assert compliance without scientific basis. He was also well aware of the power of the Catholic church and how theological objections impeded both Copernicus and Galileo. With this in mind he positioned himself to spend more than 20 years in the Netherlands which were less conservative than his native France.

By 1649 Rene was now an acclaimed philosopher and much in demand. That winter he accepted an invitation from Queen Christina of Sweden to give her personal tuition and to found a scientific academy.

The harsh Swedish winters took their toll on the eminent philosopher. His penchant for reading late into the night and rising in the afternoon did not sit well with Queen Christina's itinerary of early morning tuition classes. The 5am starts had an effect on his health and he caught a cold that later developed into pneumonia.

On 11th February 1650 he lost his battle against pneumonia and the founder of Cartesian Philosophy breathed his last.

The legacy of Rene Descartes bequeathed him the moniker as the father of modern philosophy. By actualising his visual perception of methodic doubt into writing, it became the cornerstone of influence in modern thinking.

His distinction between the mind and body gave rise to the influential train of thought known as mind-body dualism and paved the way for the branch into philosophy of the mind that has echoed through history.

His thinking, although borne from the systematic philosophy of Plato and natural philosophy of Augustine, was the bridge between ancient and modern. It gave meaning to generations of philosophers and inspired me to create this compilation of 30 of the best Rene Descartes quotes.

The philosopher Bertrand Russell shared this assesment: "What, from [Descartes’] own point of view, he should profess to know is not ‘I think,’ but ‘there is thinking’.... I think we ought to admit that Descartes was justified in feeling sure that there was a certain occurrence, concerning which doubt was impossible; but he was not justified in bringing in the word ‘I’ in describing this occurrence"

The eminent scientist Blaise Pascal appreciated his input but questioned its originality: "I would inquire of reasonable persons whether this principle: Matter is naturally wholly incapable of thought, and this other: I think, therefore I am, are in fact the same in the mind of Descartes, and in that of St. Augustine, who said the same thing twelve hundred years before"

The philosopher Arthur Schopenhauer was impressed to say: "Descartes is rightly regarded as the father of modern philosophy primarily and generally because he helped the faculty of reason to stand on its own feet by teaching men to use their brains in place whereof the Bible, on the one hand, and Aristotle, on the other, had previously served"

Arthur Schopenhauer went on to say: "For in this regard we even find our excellent Descartes, the instigator of subjective investigation and in this the father of modern philosophy, still gripped by confusions which can scarcely be explained, and we will soon see to what serious and deplorable results this has led metaphysics"

The German philosopher Gottfried Wilhelm Leibniz thought he could have given more: "As for Descartes, this is... not the place to praise a man whose genius is elevated beyond all praise. He certainly began the true and right way through the ideas, and that which leads so far; but since he had aimed at his own excessive applause, he seems to have broken off the thread of his investigation and to have been content with metaphysical meditations and geometrical studies by which he could draw attention to himself"

The astrophysicist Mario Livio recognised his influence on other great men: "The one book that turned out to be perhaps the most influential in guiding Newton's mathematical and scientific thought was none other than Descartes' La Géométrie. Newton read it in 1664 and re-read it several times until "by degrees he made himself master of the whole." ...Not only did analytic geometry pave the way for Newton's founding of calculus... but Newton's inner scientific spirit was truly set ablaze"

The philosopher John Searle recognised his merits: "Descartes may have made a lot of mistakes, but he was right about this: you cannot doubt the existence of your own consciousness. That's the first feature of consciousness, it's real and irreducible. You cannot get rid of it by showing that it's an illusion in a way that you can with other standard illusions"

The historian Russell Shorto summed him up thus: "Modesty was not a condition from which Descartes suffered"

The eminent German professor Kuno Fischer recognised the meaning he portrayed so elegantly: "In the whole range of philosophical literature, there is no work in which the struggle for truth is portrayed in a more animated, personal, captivating manner and, at the same time, more simply and clearly, than in Descartes’s essay on method and his first Meditation" 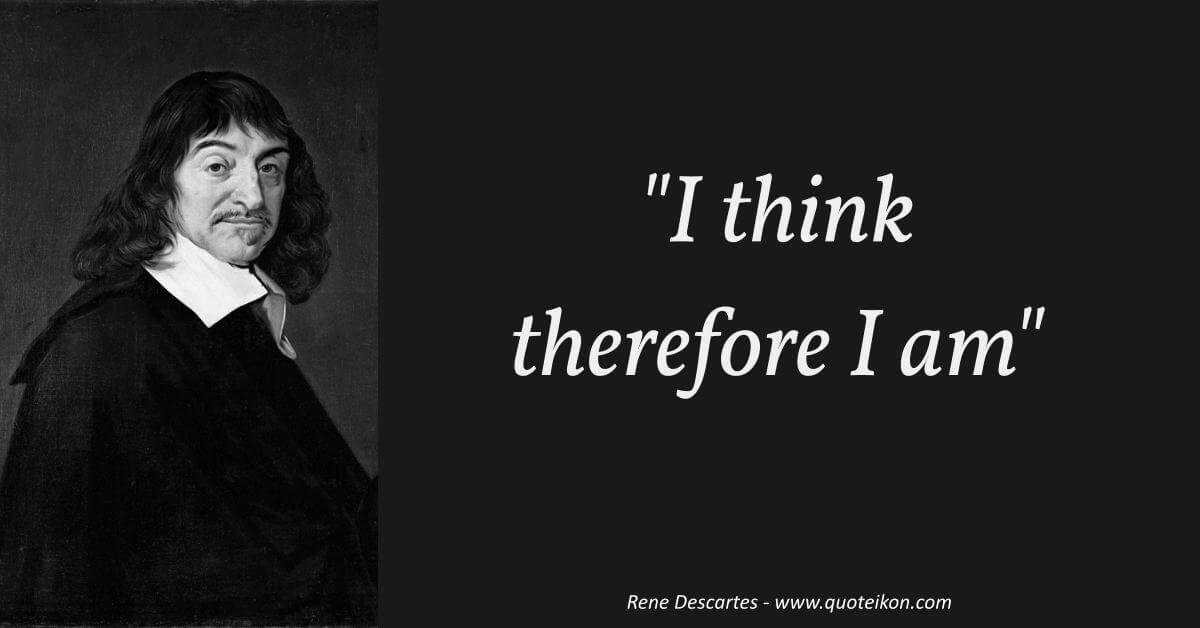