It was a time that daring to defy the Earths importance as the centre of the universe was heretical. It would take a brave or mad astronomer to demote the Earth from its lofty perch as the principal planet around which everything in the heavens revolved. But Nicolaus Copernicus was only interested in facts. He ran the numbers and his scientific conclusion that the planets revolved around the Sun would reverberate around the world for centuries to come.

The notorious glove of acceptance is seldom successfully grasped by the hand of science within its initial handshake. Notoriety and ostracisation are the usual penance to be served before acceptance. Such was the fate of Nicolaus Copernicus, a man before his time whose theories were accepted by the learned but scorned by the masses happy to indulge in the ignorance of indignant righteousness.

He found to his ultimate dismay that facts are meaningless when faced by religious dogmas that must be protected despite facing irrefutable proof to the contrary.

Although Nicolaus Copernicus was not the first astronomer who proposed the heliocentric model whereby the planets of our solar system revolved around the sun. He was however, the first to articulate his theory with accurate formulae for calculating planetary positions.

Nicolaus was only 10 years old when his copper merchant father passed away and he was raised by his uncle Lucas Watzenrode who was the Bishop of Varmia, this gave Nicolaus the opportunity to join the church which helped fund his yearning for study.

Copernicus was an inquisitive student who immersed himself in mathematical theory and the philosophical teachings of Aristotle during his education at the University of Kraków. He had a fascination for astronomy and the combination of all three fields was to cement his position as a chief instigator of the scientific revolution.

As early as 1510 Copernicus was working on his heliocentric model of the universe and he completed his work on the subject by 1532. However he refused to publish his work for fear of ridicule from a world that had believed for centuries that the earth was the centre of the universe and everything revolved around it.

He eventually published his book De Revolutionibus Orbium Coelestium as he approached his death in 1543. Initially it sold only 400 copies but the copies it did sell were to believers in his hypothesis and it was enough to gain some traction with astronomers who understood these things.

However the church deemed it heretical and banned the book leading to a century and a half of struggle for astronomers until his works were eventually proven as established facts by other scientists. The condemnation surrounding De Revolutionibus Orbium Coelestium (On the Revolutions of the Heavenly Spheres) saw the Roman Catholic Church list it on their Index of Prohibited Books. It wasn't until 1835 that a modicum of sanity prevailed and it was removed from their banned books index.

Nearly a century after his demise, another eminent astronomer, Galileo Galilei, found himself facing the same dilemma as he too hesitated to publish his works and was quoted as saying: "I have not dared until now to bring them into the open, being warned by the fortunes of Copernicus himself, our master, who procured for himself immortal fame among a few but stepped down among the great crowd (for this is how foolish people are to be numbered), only to be derided and dishonoured. I would dare publish my thoughts if there were many like you; but since there are not, I shall forbear".

The Copernican Model for our solar system lingered in the realms of scientific astronomical study because it was essentially correct. That is the legacy of Nicolaus Copernicus, who will forever be remembered as the oft described launching pad of modern astronomy.

You do not become a ground breaking astronomer without coming out with some meaningful quips to add to your prestige, so this is my compilation of 15 of the best Nicolaus Copernicus quotes.

The astronomer Galileo Galilei mused that the stakes were high: "Copernicus did not ignore the Bible, but he knew very well that if his doctrine were proved, then it could not contradict the Scriptures when they were rightly understood"

The astrophysicist Owen Gingerich praised his trail blazing: "It was Copernicus who by his work showed us how fragile time-honored scientific conceptions can be"

The eminent writer Johann Wolfgang von Goethe summed up his achievement: "Of all discoveries and opinions, none may have exerted a greater effect on the human spirit than the doctrine of Copernicus. The world had scarcely become known as round and complete in itself when it was asked to waive the tremendous privilege of being the center of the universe. Never, perhaps, was a greater demand made on mankind - for by this admission so many things vanished in mist and smoke"

The mathematician Gerald James Whitrow was impressed to say: "Copernicus made his revolutionary suggestion on purely theoretical grounds. The invention of the telescope came after and not before, the publication of his great work. This is a fact upon which we may well ponder, for it shows that the insight into natural phenomena has come as much from the genius of the theoretical as from that of the experimental and observational investigator" 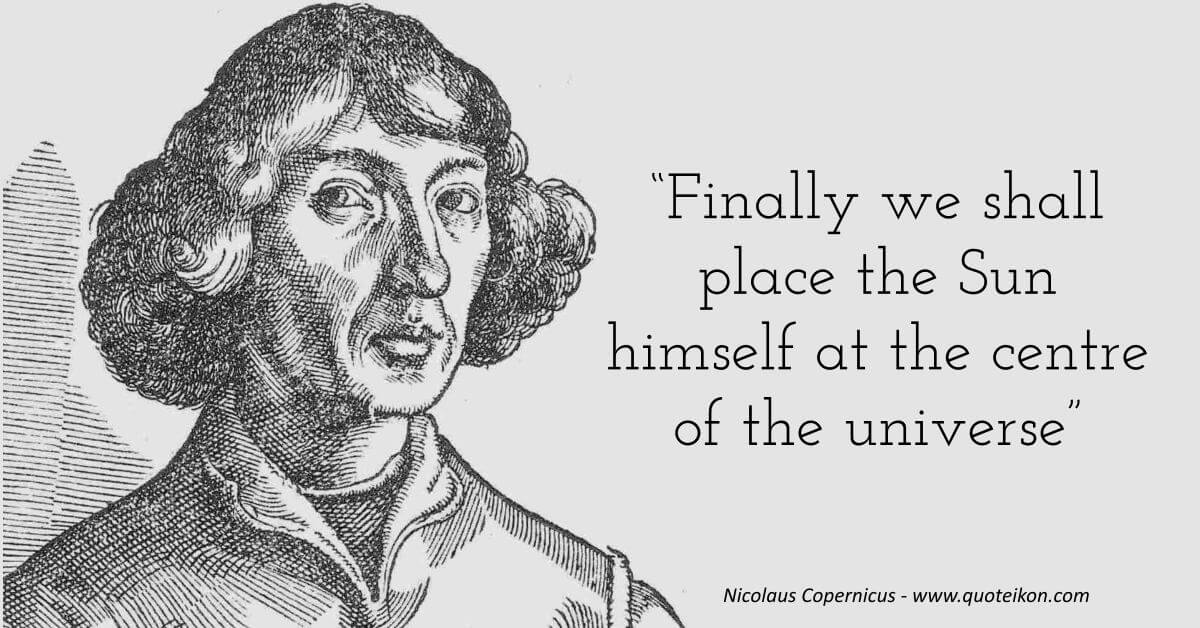