Galileo Galilei was the creative thinking mathematician who was to become one of the pivotal scientific figures in the technological revolution of the middle ages known as the renaissance. He was a pious roman catholic who despite his faith dared to defy the teachings of the church as his scientific empiricism proved the ancient ways of thinking to be untrue.

The church firmly believed in the ancient Ptolemaic system of planetary motion with the earth fixed as the centre of the universe where the sun, moon, planets and stars all existing in its influence. To proclaim otherwise, even armed with irrefutable proof, was deemed sacrilege that could lead to imprisonment, torture and death courtesy of the Roman Inquisition.

Galileo drew inspiration from the works of Nicolaus Copernicus and he saw great merit in his theories written in "On the Revolutions of the Heavenly Spheres" that proposed that the earth rotated and verily orbited the sun. He became firmly resolved to test the theory to prove it to be true. Galilei picked up inspiration for the idea of a telescope from the German master lens grinder Hans Lippershey who filed a patent for an optical device that magnified objects in the distance.

His curiosity was evoked and Galileo began experimenting by creating lenses. Eventually he successfully made a device that could at first achieve a 4x magnification and later improvised until he could look through a 30x magnification. He trained his device on the skies so making him the first man to view the heavens. Galilei looked on in awe at the intricate details of the moon's topography as he cast his eyes over its crater laden surface and mountainous regions.

It was during the month of January in 1610 that Galilei made his first significant discovery. Over a number of weeks he had trained his telescope on Jupiter and this observation proved that the four moons close to Jupiter were actually held in its orbit which was seriously doubting Ptolemy's geocentric model. These satellites were to become known collectively as the Galilean moons in honour of the great astronomer.

Galileo then got his empirical proof of the Copernicus heliocentric model of the Solar System when he observed Venus displaying a full set of phases. He tracked the planet first showing the face of its illuminated side on the far side of the sun and its dark side when traversing around the earth side of the sun. Galilei had his verifiable validation but he understood the task to convince the theologians would be a far sterner challenge than his discovery.

Because his heliocentric theory was in stark contradiction to several passages from the bible the church charged him with heresy and he was sentenced to life in prison which was later commuted to house arrest which he lived under for his remaining days. During his trial he was forced to retract his theory that the earth rotated around the sun after which he muttered under his breath the famous Galileo quote: "And yet it moves". He stood there in despair at the stubborn reluctance of the religious intolerance towards science.

Back down on terrafirma, Galileo also discovered several basic laws of motion which proved particularly useful to Isaac Newton's laws of motion and later the Albert Einstein theory of relativity. His importance to science cannot be underestimated. The work of Galilei during the renaissance was the bridge between the old world thinking and the new world reasoning that allowed to Age of Enlightenment to pave the way in art, literature and science.

It was Galileo Galilei's application of empirical methods that began the divide between science and religion as the trend to question old world dogmas became more prevalent. By 1741, publishing of his complete scientific works was finally allowed by Pope Benedict XIV and in 1759 all books promoting heliocentrism were removed from the Papal Index of prohibited books.

A full pardon for the eminent astronomer was not forthcoming until 1992, a full 359 years after his trial during the Roman Inquisition. The papacy finally issued a formal apology acknowledging the errors of his prosecution and the misguided Roman Catholic condemnation of the scientific theories of Galileo Galilei.

Although Albert Einstein gave Galileo the nickname of "The Father Of Modern Science" he is better remembered as "The Father of Observational Astronomy" who had the vision to look through glass to view the heavens in a different light. His written works covered a vast range of subjects from mathematics to mechanics and science to sunspots, he was quite the orator also whose recorded words of wisdom inspired me to create this compilation of 20 of the best Galileo Galilei quotes.

The historian Paolo Sarpi summed up his contribution: "To give us the science of motion God and Nature have joined hands and created the intellect of Galileo"

The mathematician Eric Temple Bell explained his place in history: "Galileo's recognition of the cardinal property of all infinite classes makes him one of the genuine anticipators in the history of calculus. The other was Archimedes"

The historian Florian Cajori summed him up thus: "Galileo is the founder of the science of dynamics. Among his contemporaries it was chiefly the novelties he detected in the sky that made him celebrated"

Albert Einstein added this quote: "Conclusions obtained by purely rational processes are, so far as Reality is concerned, entirely empty. It was because he recognized this, and especially because he impressed it upon the scientific world that Galileo became the father of modern physics and in fact of the whole of modern natural science"

The mathematician Alfred North Whitehead spoke of the fruits of his labour: "Newton had the advantage of coming after a series of great men, notably Galileo... who in the previous two centuries had reconstructed the science and had invented the right way of thinking about it. He completed their work" 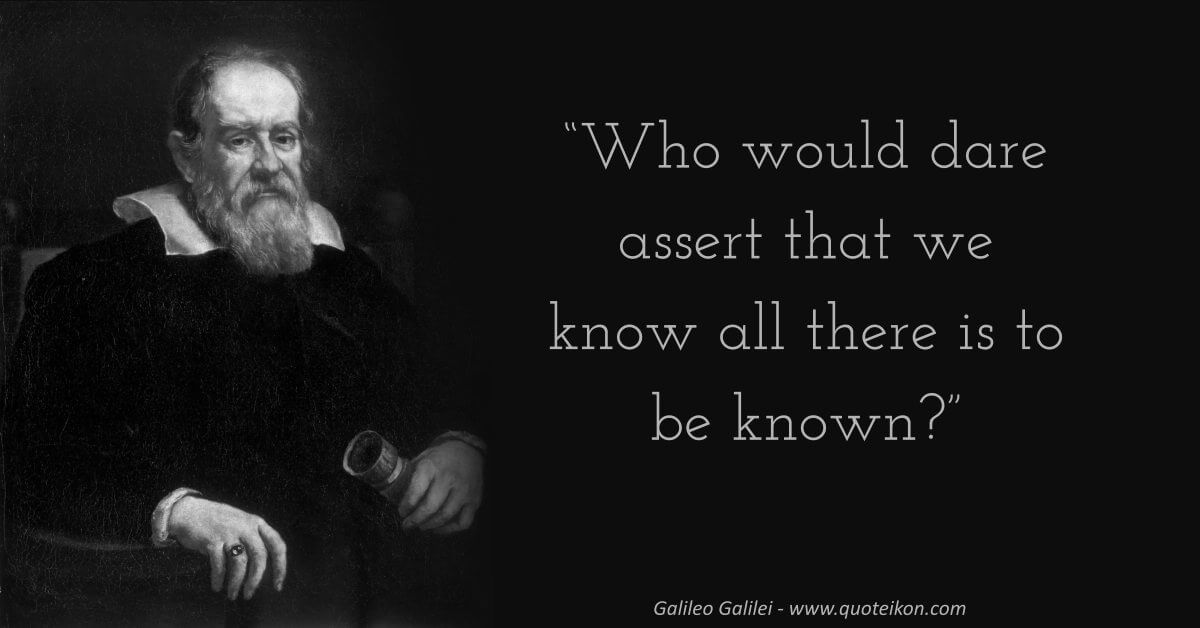