The Legacy of Roger Bacon

Back in the day, there was only a fleeting glimpse of recognition for his theories. He was a Renaissance man before the Renaissance could have been a glint in the eye of Enlightenment. It was after centuries of obscurity that he finally got credit for the sewing the seeds of the modern scientific method.

His imprisonment, courtesy of the Franciscans Minister General Jerome d'Ascoli, saw him jailed to silence what was considered a potential dissident voice. The charge was “suspected novelties” which roughly translates as the authorities cared not for his considered opinions.

Hindsight is 20/20 and leans towards a more sympathetic eye after the demise of the victim. For Roger Bacon, his passage from an inconvenient savant to a scientific pioneer took centuries for politically correct academics to accept. The wheels of political approval seldom match the advancement of science.

Once his remarkable discoveries were accepted, it also shone a light upon his astonishing prophecies which ranged from eye spectacles to diving bells and flying machines to motorized ships, eat your heart out Leonardo.

Ralph Waldo Emerson was impressed to say: "Six hundred years ago Roger Bacon explained the precession of the equinoxes, and the necessity of reform in the calendar; looking over how many horizons as far as into Liverpool and New York, he announced that machines can be constructed to drive ships more rapidly than a whole galley of rowers could do, nor would they need anything but a pilot to steer; carriages, to move with incredible speed, without aid of animals; and machines to fly into the air like birds"

The author Leland G. Howard shared this interesting comparison: "it is easier to collect the leaves of the Sibyl than the titles of the works written by Roger Bacon"

The French philosopher Denis Diderot described him as: "one of the most surprising geniuses that nature had ever produced, and one of the most unfortunate of men"

The historian Amanda Power claimed that Bacon's greatest work: "was a plea for reform addressed to the supreme spiritual head of the Christian faith, written against a background of apocalyptic expectation and informed by the driving concerns of the friars"

Amanda Power went on to describe him as: "A mirror of every age"

The scholar H.G. Plimmer reasoned that Roger Bacon never received the credit he duly deserved: "Bacon is the prophet and one of the patriarchs of modern science: he is of the race of Galileo and of Newton, and Science owes a much larger debt to this poor brother of the Order of St. Francis than most of its votaries dream of"

The author Helena Blavatsky shared this assessment: "Roger Bacon belonged by right if not by fact to that Brotherhood which includes all those who study the occult sciences. Living in the thirteenth century, almost a contemporary, therefore, of Albertus Magnus and Thomas Aquinas, his discoveries - such as gunpowder and optical glasses, and his mechanical achievements - were considered by everyone as so many miracles. He was accused of having made a compact with the Evil One"

The historian Henry Hallam described him thus: "The mind of Roger Bacon was strangely compounded of almost prophetic gleams of the future course of science, and the best principles of the inductive philosophy, with a more than usual credulity in the superstitions of his own time. Some have deemed him overrated by the nationality of the English; but, if we may have sometimes given him credit for discoveries to which he has only borne testimony, there can be no doubt of the originality of his genius"

The scholar Jeremiah Hackett shared this opinion: "in the context of Medieval [sic] Science Religion, Philosophy, and Magic, [Roger Bacon] is a towering if neglected figure of great importance"

The philosopher George Henry Lewes pondered a contradictory element: "Roger Bacon expressed a feeling which afterwards moved many minds, when he said that if he had the power he would burn all the works of the Stagirite, since the study of them was not simply loss of time, but multiplication of ignorance. Yet in spite of this outbreak every page is studded with citations from Aristotle, of whom he everywhere speaks in the highest admiration"

Johann Wolfgang von Goethe shared this intriguing observation: "the writings of Luther contain much more superstition than those of Roger Bacon"

The author Zachary Matus assayed this view: "Yet, amid the clamor of Joachite apocalypticism that quickly coiled itself around the Franciscan Order in the latter half of the thirteenth century, Roger Bacon's own apocalyptic opinions remain underappreciated"

An eminent professor, William R. Newman shared this appraisal: "Few modern scholars realize just how high Bacon's hopes were for alchemy, or how central a position it occupied in his reform of the sciences"

The theologian John Harvey Francis sought to put this record straight: "Often, when people talk of the "dark ages", they allude, with unjust vagueness, to the middle ages, a period that witnessed the foundation of our universities, that produced the philosophy of the schoolmen, the scientific researches of Roger Bacon and the poetry of Chaucer"

A professor of Mathematics Morris Kline cited Bacon in the evolution of science: "Every medieval and Renaissance court had a royal astrologer who advised the duke or prince he served. ...Men such as Roger Bacon, who even in the thirteenth century was a clear and outspoken champion of the experimental method in science"

The biographer Stewart Easton reflected on his influences: "Bacon is steeped in the Joachitic and apocalyptic literature of his time, and is greatly influenced by it in his own work and his attitude toward life"

The chemist Joseph Priestley opined this opinion: "Great as Bacon was, he was far from being free from the mistakes and prejudices of those who went before him. Even some of the most wild and absurd opinions of the ancients have the sanction of his approbation and authority"

The historian Richard Kieckhefer claimed that Bacon: "believed in the mysterious and awesome powers within nature, but typically used the word 'magic' for various kinds of frauds and deceptions"

The scholar Francis Seymour Stevenson raised an eyebrow about this theory: "Bacon expresses theological and moral truths in terms of mathematical phraseology. He compares the Trinity to an equilateral triangle, argues that the divine light of grace reaches the good in a direct perpendicular ray, the weak in a refracted ray, and the bad in a reflected ray, and compares the virtues to the rational numbers, and the passions to the irrational, etc"

The biologist D'Arcy Wentworth Thompson held this view: "Roger Bacon had shown how easy it is, and how vain, to survey the operations of Nature and idly refer her wondrous works to chance or accident, or to the immediate interposition of God"

The author J. H. Bridges opined this view when referring to Bacon's Opus Majus: "To be able to speak the language of the schools with authority was the first condition of obtaining a hearing. But he was not slow to perceive that the men who taught this philosophy were, for the most part, wholly destitute of positive knowledge. They knew no language but Latin. Beyond the shreds of arithmetic, mensuration, and astronomy taught in the manuals of the Quadrivium, they were ignorant of mathematics" 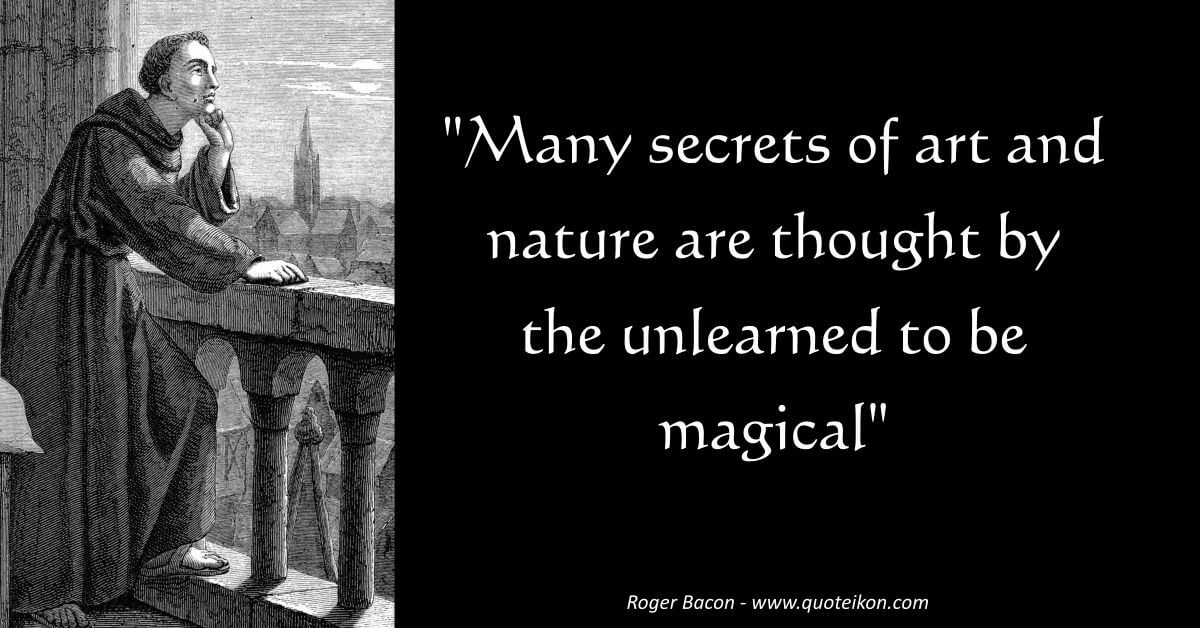