The physical laws of the cosmos have been omnipresent since the dawn of universe. Understanding and defining them is a different matter. Many had tried but few succeeded until a 17th century scientific theorist used applied mathematics to put numbers to his newly founded laws of motion and universal gravitation. His name was Isaac Newton and he was the fuel that lit the enlightenment era fire for science.

Sir Isaac Newton's contributions to science and mathematics is immensurate. His influence spawned a scientific revolution. Right up to this day he is still inspiring each new generation of physicists and mathematicians to stretch their thinking beyond the boundaries of what is already known.

When Isaac Newton formulated the three laws of motion he was laying the foundations for the science of movement. His curiosity was piqued which led him to quantifying the laws of gravitational attraction. Comparing an apple with the moon, he proved that the gravitational pull on the moon to keep it in the earths orbit was the same force that causes the humble apple to fall from its tree.

At the heart of Newtons greatest discoveries were mathematics. But the maths he needed had not been invented. He saw quantities with a value at a certain point in time and its value changing through a defined period of time. He needed to define that rate of change.

This was the birth of the mathematics of change. It would become better known as calculus. Isaac Newtons fingerprints were all over the formulation of calculus long before Gottfried Leibniz claimed its discovery. Indeed, in an academic spat both parties claimed to have discovered calculus in a dispute that rumbled on for many years. Today it is widely believed that both these eminent mathematicians made their discoveries independently, with each man inspired by their requirement to solve their very own individual scientific issues.

His inquisitive mind led Newton to quite literally see the light with his experimentation with prisms. He formalized how white light is made up of spectral colours by using a prism to split a beam of light into its rainbow colours. He then reversed this by using another prism to absorb the spectral colours resulting in a beam of white light emanating on the other side.

There were inventions, books, papers, dissertations and a transfer of knowledge never witnessed before. Newton's most famous publication was his ground breaking: "The Philosophiae Naturalis Principia Mathematica" which took two years to write but was the result of 20 years of research and critical thinking. It became the bedrock of modern science as it outlined the three laws of motion, his theory of calculus and a robust recording of his theory of universal gravitation.

This book Principia, as it is commonly known, was so advanced that many leading lights of his day struggled to understand it. The standard joke that did the rounds of academia exposed their ignorance as they said mockingly: "There goes a man who has written a book that neither he nor anybody else understands". The few that did understand promoted it without hesitation. Some 200 years later Albert Einstein faced similar problems promoting his Theory Of Relativity as only the finest scientific minds could grasp the complex enormity of what was being proposed.

For all the scientific and mathematical firsts that Isaac Newton discovered he also spent half his life experimenting with alchemy. This raised many eminent but jealous eyebrows who questioned whether he was a scientist or a sorcerer. His quest for the alchemical substance, better known as the philosopher's stone, was fruitless. Turning lead or mercury into gold proved elusive and it gives a plausible explanation why traces of mercury were found in his hair after they were tested before his funeral. It also fueled speculation surrounding his eccentric behaviour in later life.

In his personal life he remained a lifelong bachelor and sired no children. His legacy of scientific research was his gift to the world and he will always be remembered as one the greatest scientific minds this planet has ever known. From the finest minds comes the finest thoughts so this is my list of 15 of the best Sir Isaac Newton quotes.

The physicist Albert Einstein was impressed to say: "In order to put his system into mathematical form at all, Newton had to devise the concept of differential quotients and propound the laws of motion in the form of total differential equations—perhaps the greatest advance in thought that a single individual was ever privileged to make"

Professor Robert Iliffe described him thus: "He was intellectually daring… His achievements were so momentous that that term ‘scientific genius’ was invented to describe him"

The philosopher Edwin Arthur Burtt paid tribute to his legacy: "The history of mathematics and mechanics for a hundred years subsequent to Newton appears primarily as a period devoted to the assimilation of his work and the application of his laws to more varied types of phenomena"

The mathematician Freeman Dyson stereotyped his scientific modus operandi: "Newton was at heart a Cartesian, using pure thought as Descartes intended, and using it to demolish the Cartesian dogma of vortices"

The poet William Wordsworth was moved to say: "Silent face, the marble index of a mind for ever voyaging through strange seas of Thought, alone" 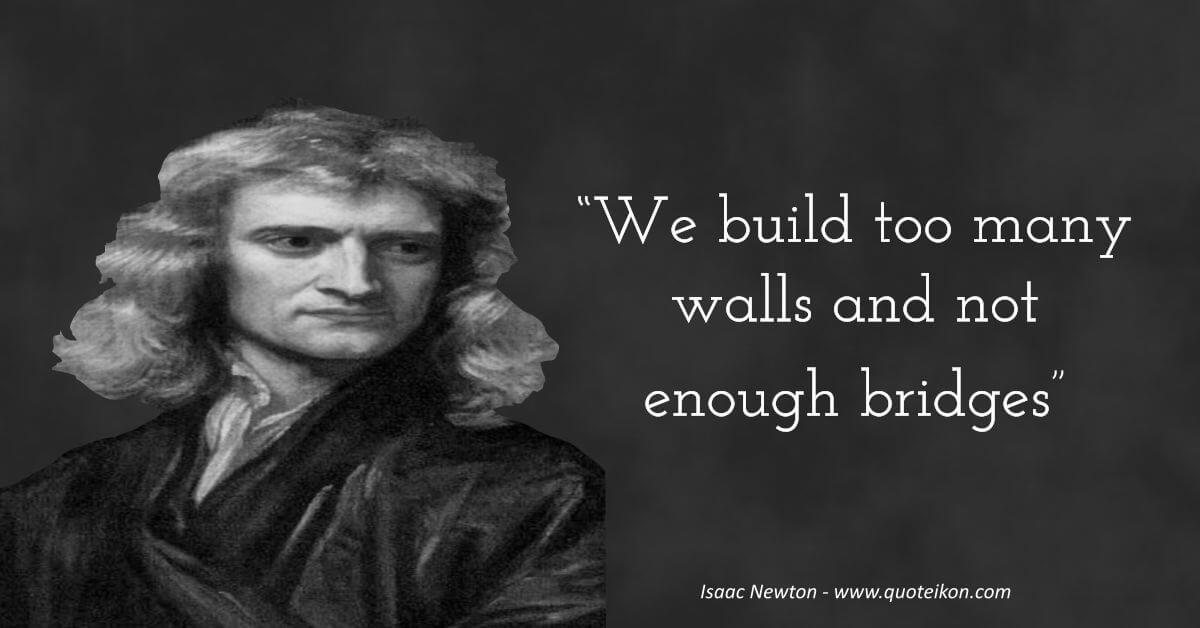