Charles Darwin was the 19th century British biologist whose published research saw him shake the foundations of theology as western civilisation started to question the very beliefs of mankind in the grand scheme of life.

Initially Darwin was reluctant to release his research as he knew the reaction to it would be hostile from many quarters, he remembered his grandfather Erasmus Darwin being vilified by the clergy with strong backing from the press and ostracised by the public for his book "Zoonomia" that considered the idea of transmutation between species. Wanting to avoid the same fate he waited 20 years until a distant colleague (Alfred Russel Wallace) sent him a letter asking him of his opinion about the theory of evolution by natural selection, which was what Darwin had been musing for two decades.

Encouraged by his scientific peers Charles decided to publish his work and give Wallace recognition for his independent contribution corroborating Darwin's research. The 1859 publication was called "On the Origin of Species" and it caused a sensation as it quickly became a best seller across the globe. The first edition left some leeway for the church in that it focused on "natural selection" but by the time the 5th edition was published it was more specific as his theories were gaining support so the term "survival of the fittest" became the mantra which sat nicely with Darwin's agnostic view that did not imply divine selection.

Survival of the fittest was so simple yet so brilliantly observed, when Darwin was sailing to South America on board The Beagle he took time to read Charles Lyell's "Principles of Geology" and he gained an appreciation of the slow process of change through millions of years and he applied the thinking of the geologist to the world of biology. His observations of certain species on mainland South America and on the Galapagos Islands laid the seeds of doubt in his Christian belief of a creator. On Galapagos he observed the same species of plants and animals with distinct differences to their cousins on the mainland and he noted how each of the islands had its own unique species.

He questioned how could these islands so close to each other be selected for unique species found no where else on earth. The variations of species on the Galapagos archipelago left more questions than answers, but being on a long voyage he had a lot more time to process the information which led to his theory of survival of the fittest or the most adaptive over a long period of time where an accumulation of small biological improvements would render later generations more adaptable to their surroundings.

The small improvements could be anything from being slightly faster in flight to a more camouflaged plumage colour, each subsequent generation gets an accumulation of all ancestors skills and physicality thus rendering them more adaptable to their surroundings. No scientist has ever made the seismic changes to an accepted old world view than Charles Darwin, even to this day the basis of his theories are accepted, studied and adapted to further the enlightenment of mankind. When he wasn't making ground breaking scientific breakthroughs he was good for a one liner also, so here is my compilation of 22 of the best Charles Darwin quotes

The author Richard Dawkins described him thus: "Charles Darwin had a big idea, arguably the most powerful idea ever. And like all the best ideas it is beguilingly simple"

The anthropologist Thomas Henry Huxley was an early exponent of his theories: "There is but one hypothesis regarding the origin of species of animals in general which has any scientific existence - that propounded by Mr. Darwin"

Mahatma Gandhi shared this assessment: "Darwin for the greater part of his book Origin of the Species has simply massed fact upon fact without any theorising, and only towards the end has formulated his conclusion which, because of the sheer weight of testimony behind it, becomes almost irresistible. Yes I have criticised even Darwin's generalisation as being unwarranted"

Karl Marx was inspired to say: "Darwin's book on natural selection. Although it is developed in the crude English style, this is the book which contains the basis on natural history for our view"

The Evolutionary biologist Ernst Mayr felt the scientific freedom: "Eliminating God from science made room for strictly scientific explanations of all natural phenomena; it gave rise to positivism; it produced a powerful intellectual and spiritual revolution, the effects of which have lasted to this day" 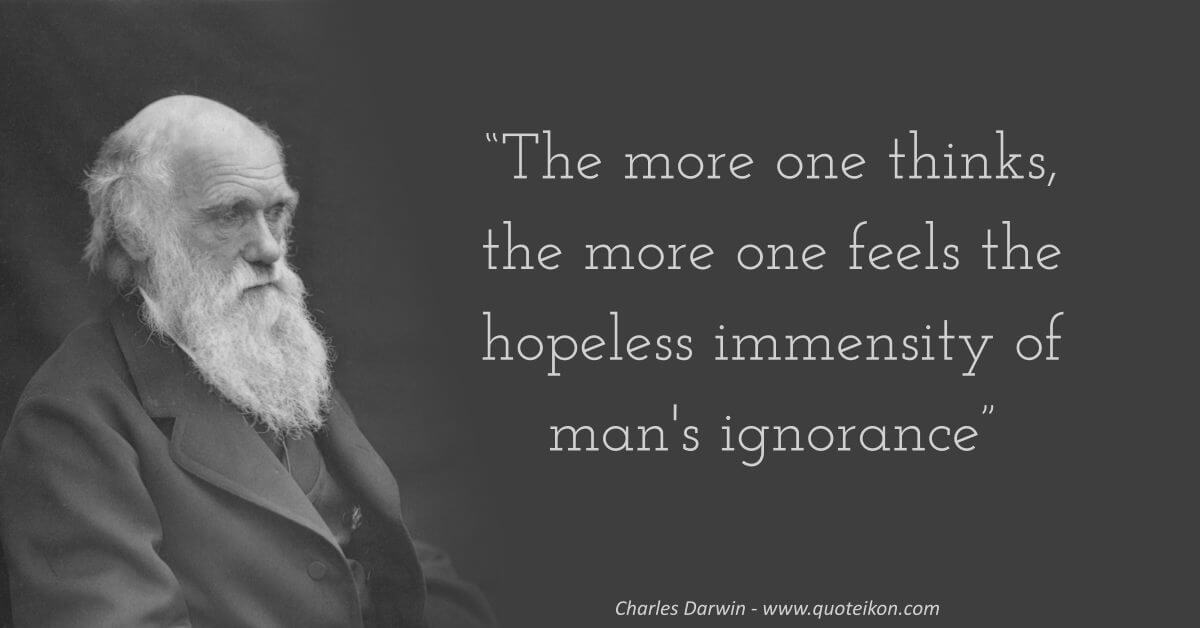