In a post war era of radicals, reds and rebels Doris Day caught the eye of a world craving for the nostalgic look of the wholesome all American girl as her fresh faced blonde beauty, Hollywood smile and a voice as sweet as honey charmed a nation with natural warmth and expressiveness.

With Jayne Mansfield and Marilyn Monroe making headlines with the raunchier "downtown girl" characters, Doris Day took up the slack for the lighter "girl next door" type of roles and cinema audiences took her to their hearts in droves as she became the top box office earner in the U.S. in four separate years.

In reality her goody-two-shoes image was a bigger fabrication than the script of any romantic comedy she played in as she was not as lucky in love off screen as she was on it. Doris was married at nineteen to a wife beater and she became a divorced single mom at twenty, husband number two could not face up to her fame and walked out and husband number three managed to do the unthinkable and bankrupted one of the most richly rewarded actresses in Hollywood. Husband number four fared no better as he lacked the foresight to appreciate how much she cared about her furry friends through her work as an animal activist.

The young Doris Day had potential to make it as a dancer but the day before she was to leave for Hollywood she was in a motor vehicle accident and suffered a badly broken leg which put a halt to her being the next Ginger Rogers. During her convalescence Doris listened attentively to the radio and practiced singing along to her favourite tunes. She found inspiration in the wonderful voice of Ella Fitzgerald whom she greatly admired and Doris Day was quoted as saying about Ella: "There was a quality to her voice that fascinated me, and I'd sing along with her, trying to catch the subtle ways she shaded her voice, the casual yet clean way she sang the words". Doris Day had inadvertently discovered her talent to sing and after her mother arranged singing lessons she blossomed into a beautifully buoyant contralto who gained airplay on the radio and was quickly discovered by Barney Rapp and later went on to work with bandleader Les Brown.

It was with Brown that Doris recorded her first hit record "Sentimental Journey" which was released in 1945 and became popular with GI's returning home from WW2. She toured with The Les Brown Band for two years and regularly featured on the Bob Hope radio show, all the time gradually gathering the plaudits which earned her an audition for the 1948 movie "Romance on the High Seas". The director was Michael Curtiz, who openly admitted he was looking for someone who "looked like the All-American Girl", and he later cited discovering Doris Day as a highlight of his career.

Doris Day had got het foot into the door of Hollywood and tinseltown was welcoming with her cast as Jo Jordan starring alongside Kirk Douglas and Lauren Bacall in the 1950 musical "Young Man with a Horn" and then onto her next role as Grace LeBoy Kahn in "I'll See You in My Dreams" (1951) which was Warner Brothers second highest grossing film of the year. The songs from her movies were all riding high in the charts and then in 1953 she was cast as the leading lady in "Calamity Jane" which was her most famous character to date and the name Doris Day was growing in stature both as a singer and a leading lady.

Throughout the remainder of the 1950's her roles as a musical comedic actress took a more dramatic course in movies such as "Love Me or Leave Me" where she starred with James Cagney and the Alfred Hitchcock classic thriller "The Man Who Knew Too Much" where Doris shared top billing with James Stewart and she sung one of the most memorable songs of all time "Que Sera, Sera, Whatever Will Be, Will Be" which was an Oscar winner for best original song. Other movies of note in the 50's were the comedy "Teacher's Pet" with Clark Gable and "It Happened To Jane" where Jack Lemmon played the leading man.

Doris Day ended the decade with a bang starring opposite Rock Hudson in the critically acclaimed romantic comedy "Pillow Talk" (1959) that saw her nominated for her first Academy Award for best actress. Such was the success of Pillow Talk that two subsequent movies with Hudson were released: "Lover Come Back" (1961) and "Send Me No Flowers" (1964) and although not as successful as "Pillow Talk" they were still both well received by cinema goers.

As the decade progressed her shining star was dimmed by the sexual revolution that was sweeping the western world as audiences voted with their feet for "the girl who showed more" rather than "the girl next door". Critics mocked her with the jibe "the worlds oldest virgin" and stale jokes did the rounds with the composer Oscar Levant resurrecting this old Groucho Marx quote: "I've been around so long, I knew Doris Day before she was a virgin".

In 1968 Doris Day's world fell apart when she was stunned by her husbands Martin Melcher sudden death and absolutely mortified to find out that despite being one of Hollywood's most bankable assets she was bankrupt. Martin Melcher was handling all her financial affairs and he enlisted a Hollywood lawyer called Jerome Bernard Rosenthal who between them squandered all her money in failed investments and various other dubious schemes. Doris successfully sued Rosenthal but she had to wait until 1979 to receive the settlement which was 25 per cent of what she had been awarded.

Melcher had also signed Doris up to a television deal which she was unaware of and did not want to do, however she felt obliged to fulfill the contract so she proceeded and made a success of what was to become known as "The Doris Day Show".

Her on screen persona mirrored her real life self as she always wore same optimistic smile which was why she felt so at home in front of the camera. With regard to the easiness of her transition from singing to acting Doris Day was quoted as saying: "Movie acting came to me with greater ease and naturalness than anything else I had ever done".

Off screen she worked tirelessly as an animal activist whereby she founded many charitable organisations including the Doris Day Animal Foundation (DDAF) and the Doris Day Animal League (DDAL). She was well known in both Hollywood and her home town of Carmel for rounding up stray dogs and giving them shelter in her animal sanctuary. Doris was so passionate about her furry friends she was even quoted as saying: "When I see Liz Taylor with those Harry Winston boulders hanging from her neck, I get nauseated. Not figuratively, but nauseated! All I can think of are how many dog shelters those diamonds could buy".

Despite the many setbacks she suffered throughout her life she always maintained a positive attitude and possessed the fighting spirit to pick herself up and bounce back. Doris Day had a wonderful career bestowing to the world cherished memories in song such as the timeless classics "Whip Crack Away", "Qué Será Será", "Sentimental Journey" and "Perhaps, Perhaps, Perhaps". Doris was the original girl next door who first charmed America and then the world with her silken voice, natural acting and broad beamed smile, she was also a fatalist who had no regrets as she once stated: "I've always believed things work out exactly as they're supposed to". Off screen her positivity often came through in her comments and to reflect that I have created this compilation of 21 of the best Doris Day quotes.

Tony Bennett recognised the talent: "She's gifted in a way that makes everything she does work. She's a Hollywood producer's dream: she has beauty, she's a great actress, a wonderful singer - putting it simply, she has it all!"

Burt Bacharach was relentless: "I remember writing with Hal David five different versions of ‘Send Me No Flowers.' Finally they picked the last one -- we kept going because we really wanted her [Doris] on the song. She did it great!"

The big band leader Les Brown Sr gave this assessment: "As a singer Doris belongs in the company of Bing Crosby and Sinatra"

James Cagney spoke of her acting clarity when he said she had: "the ability to project the simple, direct statement of a simple, direct idea without cluttering it"

James Garner spoke of her on screen presence: "She exuded sex but made you smile about it"

Rock Hudson gave this explanation of her wholesome image: "I suppose she was so clean-cut, with perfect uncapped teeth, freckles and turned-up nose, that people just thought she fitted the concept of a virgin"

The lyricist Sammy Cahn was wowed to say: "I'll remember this to my grave. We all walked into a room to see the screen tests. The first screen test was Marion Hutton's. Then came Janis Paige [who ended up with a part in the film]. Then on the screen came Doris Day. I can only tell you, the screen just exploded. There was absolutely no question. A great star was born and the rest is history"

Olivia Newton-John was inspired: "I have always admired Doris Day for her beautiful voice that has such feeling and depth to it - she can sing any style and touch you - a true and rare gift. I admire her as both an artist and a woman"

Frankie Laine was impressed to say: "Doris was a great performer with warmth and expressiveness. It was one of the most pleasant recording dates I ever had when we sang together. She had a wonderful Jazz vibrato voice and could have been one of the top jazz singers" 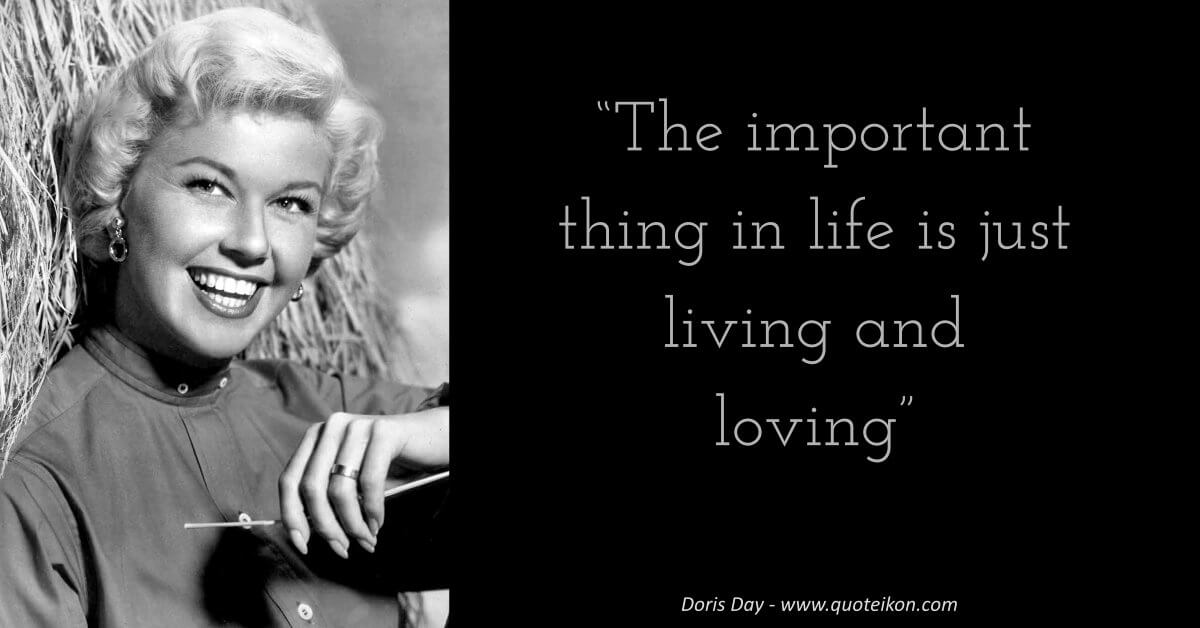