Bright eyed and hungry for success Frank Sinatra emerged from the bowels of Hoboken to become one of the most successful entertainers of the 20th century. Early on he was nicknamed "The Voice" and although his singing style evolved through the decades it was his studious observations of the expressive musical and singing styles of Tommy Dorsey and Billie Holiday that inspired his act during his breakthrough at the Paramount Theatre in Times Square New York.

Sinatra's voice was a gift but he worked extremely hard on vocal improvisations using tone and phrasing to give greater emphasis and meaning to the lyrics and his resultant act was mesmerising for 1940's America. The "bobby sox" generation of girls went wild and Frank became an over night sensation, his stage persona was riveting as he gripped the audience with his soft as cashmere voice that had the ability to emote the lyrics to a degree of personal understanding everyone in the audience felt.

As the bright stage lights shone on Sinatra his New Jersey drawl exited stage left as he mastered a diction in singing that was more Hollywood than Hoboken, he gave the words a personal meaning like he was confiding directly to each individual member of the audience. He had the ability to bring lyrics to life with his phrasing and this was a feeling the audience recognised and fully appreciated.

Sinatra had become one of the first teen idols of the 20th century as frenzied audiences would scream or swoon at his performances earning him the moniker's "Swoonatra" and "The Sultan of Swoon". It wasn't long until Hollywood beckoned and although his early film roles showed great promise it was not until the 1950's that he conquered the silver screen.

The 1940's were successful years for Sinatra but his star was dimming along with his voice as he entered the next decade as years of cigarettes and alcohol were taking their toll. His absence from prominence was only temporary as he was given the role of a GI called Maggio in the 1953 movie "From Here to Eternity" for which he gained wide critical acclaim and won an Academy Award as best supporting actor for his gritty performance.

This got him back into the limelight and he went onto appear in a total of 58 movies and importantly for him he was able to get his singing career back on track. His voice had matured by this stage as it deepened but became more expressive and his image changed also; he retained his immaculate dress sense but his image started to portray his off stage persona of the hard living womaniser who liked a drink which appealed to working class America of the 1950's.

The stage was set for the rat pack years with his buddies Dean Martin, Sammy Davis Junior, Peter Lawford and Joey Bishop who all appeared in the 1960 heist movie "Ocean's Eleven" that spawned a series of Ocean movies. Las Vegas was like a second home to Frank from the 1950's right through to the late 1970's as he was one of the biggest draws on the Strip where he regaled many a legendary tale of the rat pack raising hell.

Sinatra was a vocal supporter of the civil rights movement and he refused to perform in any venue that segregated the audience or stay in any hotel that did not conform to racial equality. He was the first real super star of the modern era who paved the way for fan hysteria that would become a symbol of the rock and roll era.

Up until 2001 Frank's version of "New York New York" was played after every win for the New York Yankees and the Liza Minnelli version was played if they lost. However when Liza asked them to play her version after a victory or desist from playing it they opted for Frank and the Sinatra version is now belted out win, lose or tie.

Away from the microphone he was also good for a one liner, so this is my compilation of 20 of the best Frank Sinatra quotes

Dean Martin spoke fondly: "It's Frank's world, we're all just livin' in it"

The singer Bing Crosby paid him the ultimate compliment: "Frank is a singer who comes along once in a lifetime, but why did he have to come in mine?"

The critic Robert Christgau was impressed to call him: "The greatest singer of the 20th century"

The composer Nelson Riddle said of him: "His taste is so impeccable ... there is still no one who can approach him"

The author Arnold Shaw hypothesised that: "If Las Vegas had not existed, Sinatra could have invented it"

Bob Dylan was moved to proclaim: "All those things that we thought were here to stay, they did go away. But he never did"

Alicia Keys was full of praise: "Frank Sinatra is an all-timer, the true definition of class and style" 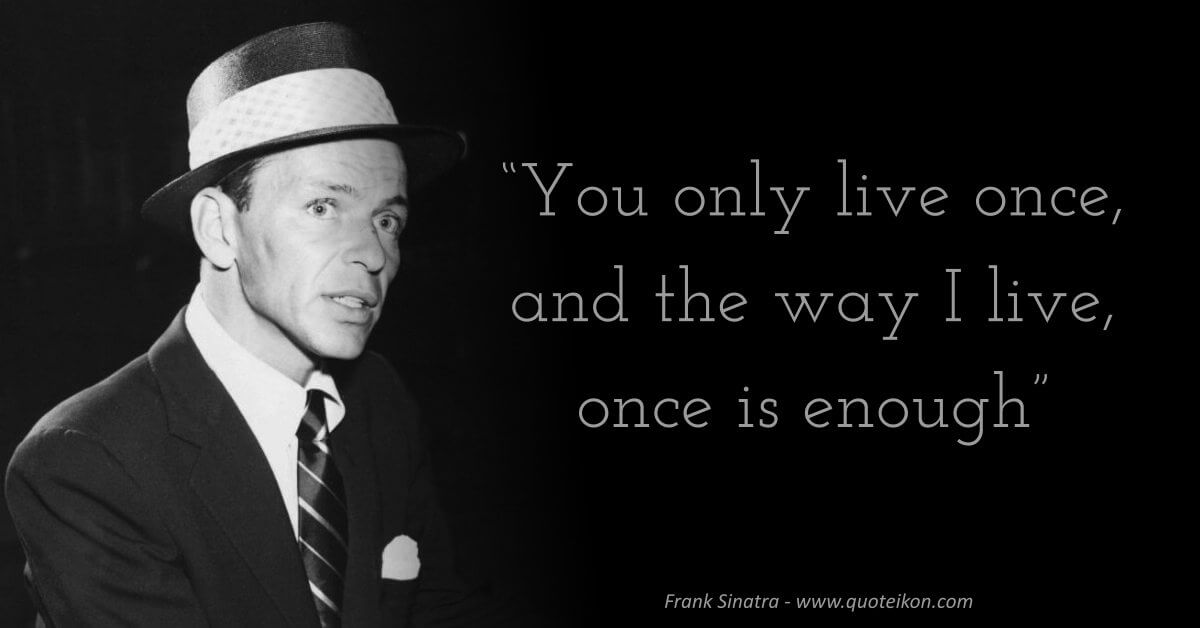