At the dawn of jazz in 1917 a star was born into a family out of wedlock but despite a difficult upbringing the silken voice of Ella Fitzgerald shone through and she was to be forever known as "the first lady of song". Endowed with an immaculate voice that stretched across 3 octaves she was a mezzo soprano with an ear for melodic improvisation that made her the most popular American jazz singer of her generation and beyond.

No one who witnessed in 1934 the nervous 16 year old make her debut at amateur night at The Apollo Theatre in New York would be surprised to learn that an international career spanning seven separate decades was on the horizon as the raucous crowd stood and bellowed for an encore. Ella was never comfortable with her appearance but when she took to the stage she would close her eyes and immerse herself into the music, as she sang she lost all her inhibitions as she felt so at home with the microphone.

Describing her shyness but lack of stage fright Ella Fitzgerald was once quoted as saying: "Once up there, I felt the acceptance and love from my audience, I knew I wanted to sing before people the rest of my life". During her career she created in excess of 200 albums selling more than 40 million worldwide, she graced the stage with the likes of Count Basie, Frank Sinatra, Louis Armstrong and Nat King Cole and sang the songs of some of the great American composers of her generation including: Billy Strayhorn, Cole Porter, Duke Ellington, George Gershwin and Irving Berlin.

Her path to super stardom and worldwide recognition was not an easy one for a person of colour in the racially divided U.S. as Ella and her band members often faced issues with discrimination and segregated venues. In Norman Granz she had a no nonsense manager who refused to play any venue that enforced a colour segregation policy, so the theatres had a choice of no segregation or no Ella.

She also had an unlikely ally in Marilyn Monroe who was a big fan and when she heard Ella could not play at the Mocambo Club in Los Angeles because of their racial policy Marilyn called the owner and told him if you book Ms Fitzgerald that she would personally take a front row table every night and the press would go wild. The clubs manager relaxed his policy so Ella sang, Marilyn dazzled in the media frenzy and Ella never had to play a small jazz club ever again.

She was quoted as saying at the time: "I owe Marilyn Monroe a real debt. It was because of her that I played the Mocambo, a very popular nightclub in the '50s".

For someone who was often called The Queen Of Jazz it was fitting that she signed off with her last concert in the prestigious Carnegie Hall in 1991, an emotional Ella must have contemplated her musical journey, her 13 Grammy Awards and the wonderful people she had met during her 60 year career as she belted out for the last time Dream A Little Dream of Me, Mack The Knife and Summertime. Humble and kind hearted to the end, she was also good for a one liner, so here is my compilation of 15 of the best Ella Fitzgerald quotes

The crooner Bing Crosby paid her the highest compliment: "Man, woman or child, Ella is the greatest of them all"

Ol' blues eyes Frank Sinatra knew how to get a party started: "The best way to start any musical evening is with this girl. It don't get better than this"

Musical director Vincente Minnelli shared this advice: "If you want to learn how to sing, listen to Ella Fitzgerald"

The composer Ira Gershwin wished she could sing his whole repertoire: "I never knew how good our songs were until I heard Ella Fitzgerald sing them" 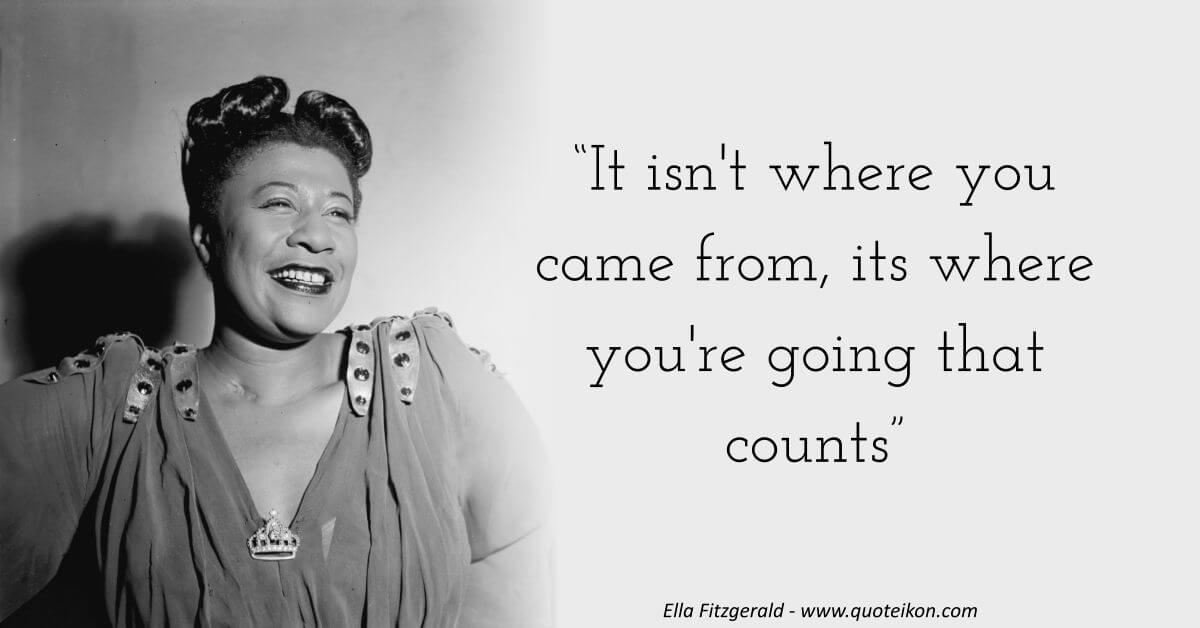