In 1944 Hollywood discovered, quite by chance, a strong willed femme fatale called Lauren Bacall who was capable of matching the hard boiled cynicism of her leading man. It was not just any leading man. It was Humphrey Bogart, who following his successes in "The Maltese Falcon" and "Casablanca" was at the top of his fast talking game and the hottest property on the silver screen.

It was Bacall's smouldering eyes and husky voice that transformed his bravado into libido with an on screen chemistry that fascinated the audience and sent to media into a frenzy. The movie was "To Have and Have Not". This was the film where the whole world witnessed Bogie and Lauren Bacall falling head over heels in love with each other, both on screen and off. It was a spontaneous romance that even the best screenwriters in Hollywood could never have conceived.

Her tall sultry looks were pure Hollywood but her independent and determined mind was something new to cinema goers brought up on male dominant on-screen characters, so to have Ms Bacall standing her ground and leveling the playing field with her clever dialogue was not only intriguing to watch it was box office gold.

Lauren Bacall was discovered modelling on the cover of Harper's Bazaar magazine in 1943 when Slim Keith noticed her look and could see it easily working on the silver screen. Slim Keith was married to the movie director Howard Hawks and she convinced him to give her an audition for a role in his upcoming movie "To Have and Have Not". At first Hawks was unsure, but after a second screen test he was convinced by the deep voiced teenager with the piercing green eyes and he took the risk to give the unknown a shot at the tender age of nineteen.

Hawks and Bogart took it upon themselves to change parts of the script and set a more comedic tone to the drama, for every scene they would discuss every detail with Bacall and the upshot was the remarkable creativity of a brilliant director coming alive on the screen, the chemistry between Bacall and Bogart was electric so they created more and more lines for her until she went from supporting actress to leading lady and it was cinematic history in the making.

"To Have and Have Not" was not just a critically acclaimed film noir it was also successful at the box office, so with the audience primed, the studio quickly utilised their PR department to raise Bacall's profile and lined up her second movie "Confidential Agent" (1945), however without the keen eye of Howard Hawks directing and the chemistry with Bogie the film bombed at the box office.

With the studio keen to get her career back on track Hawks was given the directorship of "The Big Sleep" and with Humphrey Bogart back as her leading man the studio had high hopes for another hit movie.

With Bacall playing the sharp tongued Vivian Rutledge opposite Bogart's Philip Marlowe the chemistry was back and under Hawks masterful directing another film noir classic was released in 1946 to much critical acclaim. "The Big Sleep" cemented Bacall's place in Hollywood folklore as an icon of the genre of film noir for decades to come.

She was to star in two further movies with Humphrey Bogart :Dark Passage" (1947) and "Key Largo" (1948) which were both well received by audiences but did not reach the giddy heights of her first two movies.

During the 1950's her career went into a slow drawn out decline, the only notable exception was "How To Marry A Millionaire" whereby she starred with Betty Grable and Marilyn Monroe in 1953 gaining positive reviews with her witty rendition of a gold digger on a mission.

After losing her husband in 1957 the great leading lady movie roles dried up. As one door closes another opens, the stage beckoned and Lauren Bacall showed she still had a lot to offer. In 1970 she won a Tony Award for Best Actress in a Musical for "Applause" and in 1981 she became a two time Tony Award winner for best actress for her role in "Woman Of The Year".

There was to be one further movie success for Lauren Bacall as she was nominated for a supporting actress Academy Award for her role as Hannah Morgan in "The Mirror Has Two Faces" (1996), she may not have won the Oscar but she did carry away the Golden Globe for this performance in the twilight of her career.

The story of Bogie and Bacall is so intertwined with the cinematic history of Hollywood's legendary couples that even Humphrey Bogart saw it add focus upon his fabled career. After all it was he, who as the 1944 king of Hollywood had the whole world at his feet, only for the hard bitten cynic to melt in the chemistry of a legendary on-screen performance by his femme fatale co-star.

For all his on screen bravado he could not ignore his libido when confronted with a lady who could only be described as a true Hollywood queen. All teenage girls have irresistible charms, just as all actresses know how to seduce at the flick of a switch. But fleeting victories usually prove hollow.

The teenage Lauren Bacall defied masculine logic. She rewrote the rules. She had celluloid charisma to burn which lit a fire so bright it softened the hard-boiled heart of a Hollywood hunk who thought he'd had it all. And the irony is he probably did until he met Bacall.

Delivering acid tongued lines was her day job but off screen she was always good for a one liner, so this is my compilation of 20 of the best Lauren Bacall quotes.

The director Robert Altman shared this observation: "She never got locked in any time warp. Think about how many social and attitudinal changes that have occurred, and yet Bacall has always remained unique"

The critic Bosley Crowther was complimentary about her role in "Dark Passage" (1947): "Miss Bacall ... generates quite a lot of pressure as a sharp-eyed, knows-what-she-wants girl"

When she starred in "Applause" which was the stage version of "All About Eve" that was brought to Broadway in 1970, Bette Davis visited Lauren Bacall back stage where she was impressed to say: "You're the only one who could have played the part"

She caught the critical eye of Jessica Kiang in "Key Largo" (1948) who wrote: "Bacall brings an edge of ambivalence and independence to the role that makes her character much more interesting than was written"

The critic James Agee described her thus: "Lauren Bacall has cinematic personality to burn, and she burns both ends against an unusually little middle" 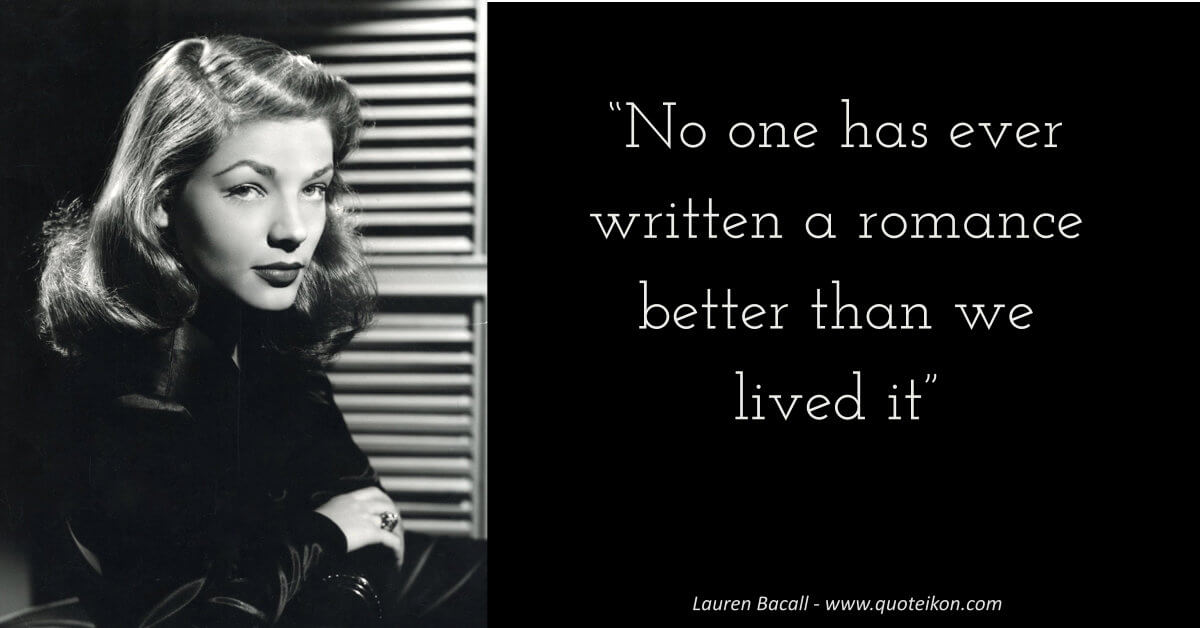