She was the biggest sex symbol of the 1950's. More books have been written about this movie actress than all of Hollywoods pretenders to the crown of the greatest female movie icon of all time. Her name was Marilyn Monroe. She was an ambitious Los Angeles girl who dreamt of seeing her name in neon lights and went on to become the most glamourous screen goddess of the twentieth century.

The much vaunted Marilyn Monroe magic has been dissected, sliced, diced and studied under a public magnifying glass by all her co-stars, producers, directors, critics and most of all her adoring fans. Yet none could explain her on screen charismatic presence.

Monroe had that telegenic ability to look normal in real life but transform under a camera lens to someone that displayed so much more than skin deep beauty. When the camera focused on Marilyn it could capture literally more than the human eye could comprehend. When revealed on film it displayed a remarkable presence of a persona that was both alluring and innocent yet completely captivating. It was like her eyes, face, body and expressions spoke a language only the camera could understand and only the movie projector could translate this into a form perceptible by people.

This was the Marilyn Monroe magic that melted the movie moguls. The film persona that the public demanded. It was big box office that took the silver screen by storm in the 1950's. Marilyn and movies became the perfect match.

There were many memorable Monroe movies including the 1953 classics that first established her name "Gentlemen Prefer Blondes" and "How To Marry A Millionaire". Then there was that staged wardrobe malfunction, who could forget the astonished surprise on her face when the breeze from a subway vent blew Marilyn's iconic white dress into the air in "The Seven Year Itch" in 1955. To top them all was one of the greatest movies of all time, the 1959 comedic classic "Some Like It Hot" where Marilyn shared top billing with Tony Curtis and Jack Lemmon.

The last film that Marilyn Monroe starred in was the 1961 John Huston movie "The Misfits". In an ironic twist of fate she shared top billing with another movie icon Clark Gable who also did not realise this was to be his last ever movie. Filming was beset with issues about Marilyn's time keeping and once it was released it initially received mixed reviews. However history has been kinder than the earlier critics, "The Misfits" is now viewed as a timeless classic and as a fitting finale to the greatest female sex symbol of the twentieth century.

Marilyn Monroe spent fifteen years shooting movies in tinsel town, in the ten years as a leading actress her films grossed $200 million. The iconic immortality of her screen legend far outshines the dumb blonde image that did the rounds in early 1950's Hollywood. She had the look and the hook, Marilyn was blessed with the timing of a comedic genius who could rattle off a witticism or a facial reaction so convincing it belied the early criticism of her acting abilities.

Her on screen persona took on a life of its own, yes a lot of the lines were made for her characters but she had a sharp mind. When she was informed she was the not the star in the 1953 movie "Gentlemen Prefer Blondes" she quickly quipped back by saying: "Well whatever I am, I'm still the blonde".

But Marilyn was more than a pretty face on film. There are countless tales of how she helped or cared for people including a wonderful story of kind thoughtfulness showing the warm hearted side of her nature.

In 1955 everyone who was anybody in the music world wanted to play at The Mocambo Club in Hollywood, but if you were a person of colour it was a no can do. That is until Marilyn Monroe called the owner of the Mocambo and told him if he booked Ella Fitzgerald that she would sit in the front row every night for one week. The owner agreed, the race ban was abolished, Marilyn sat in the front row for one week, the press went into a stupefied frenzy and best of all Ella Fitzgerald never looked back after that magical moment of kindness from the soul of a beautiful angel.

As both a woman and an actress Marilyn was ahead of her time. Her whole adult life was played out in the press who followed her every stilettoed footprint both on and off screen. Such scrutiny is enough to try the patience of a saint, let alone a glamourous actress with a fragile mind looking to escape her loneliness under a perpetual public gaze.

The camera may have been her friend, but it was also her millstone. Marilyn tried to cope, she battled depression using prescription drugs and alcohol as a crutch to get by. Depression however, is a dark shadow that haunts its victim, it is a slow relentless pressure that yields an unforgiving control over the mind until a tipping point is reached and breaking point is breached. The pressure of being in the public eye amplifies the victims feelings beyond the scales of controlled reasoning.

Marilyn Monroe shone bright for many years until the fateful night of 5th August 1962 when something snapped and a barbiturate overdose took the life of a beautiful soul who will always be remembered as an iconic legend of the silver screen.

Some of the worlds greatest icons have people hanging off their every word for its meaning, so without further ado this is my compilation of 23 of the best Marilyn Monroe quotes

In a 2008 interview with the Guardian newspaper the actor Tony Curtis finally destroyed the "kissing Hitler" nonsense: "Someone said to me, 'Hey, what's it like kissing Marilyn?' I said, 'It's like kissing Hitler. What are you doing asking me such a stupid question?' That's where it came from"

The actor Richard Widmark talked about her magic: "Something happened between the lens and the film. Nobody knew what the hell it was. On the set, you'd think: 'Oh, this is impossible; you can't print this.' You'd see it, and she's got everyone backed off the screen. Olivier said the same thing. She had that phenomenal something! Nobody knows what it is, but she had it"

The director Billy Wilder shared this observation: "She had a feeling for and a fear of the camera. Fright. She also loved the camera. Whatever she did, wherever she stood, there was always that thing that comes through. She was not even aware of it"

Billy Wilder was impressed to say: "She was an absolute genius as a comedic actress, with an extraordinary sense for comedic dialogue"

Never one to mince her words Bette Davis shared this observation: "She's the original good time that was had by all"

Clark Gable spoke of her unequalled presence: "Marilyn is a kind of ultimate. She is uniquely feminine"

Montgomery Clift thought she was a real talent: "Marilyn was an incredible person to act with, the most marvelous I ever worked with"

The academic Sarah Churchwell summed her up by saying: "The dumb blonde was a role – she was an actress, for heaven's sake! Such a good actress that no one now believes she was anything but what she portrayed on screen"

The producer Jerry Wald mused about her star quality: "True, she's not punctual. She can't help it, but I'm not sad about it, I can get a dozen beautiful blondes who will show up promptly in make-up at 4am each morning, but they are not Marilyn Monroe"

The film maker Nunnally Johnson described her thus: "She was a phenomenon of nature, like Niagara Falls and the Grand Canyon. You can't talk to it. It can't talk to you. All you can do is stand back and be awed by it"

Alastair Cooke spoke solemnly of her demise: "She could never learn to acquire the lacquered shell of the prima donna or the armour of sophistication. So in the end she sought the ultimate oblivion, of which her chronic latecomings and desperate retreats to her room were token suicides"

The social activist Gloria Steinem sensed a deeper fragility to her persona: "I remember her on the screen, huge as a colossus doll, mincing and whispering and simply hoping her way into total vulnerability" 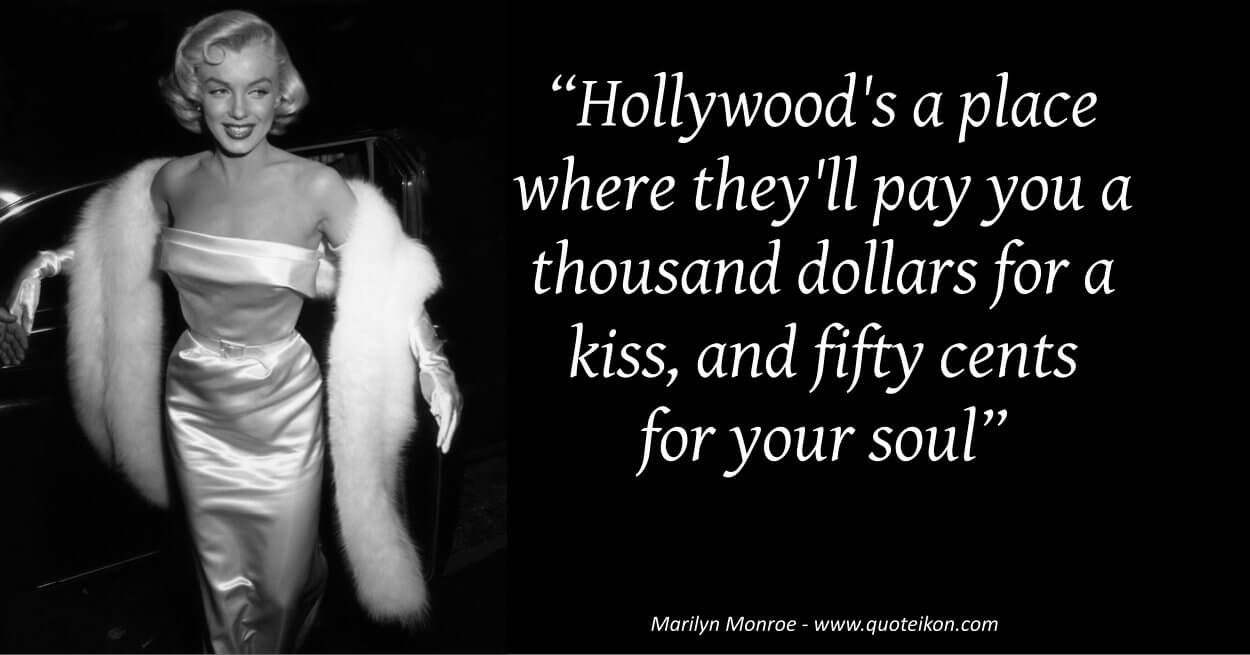