Clark Gable was the Hollywood legend with the smouldering eyes and knowing smile that made women swoon while his leading ladies all vied for a piece of what Life magazine once described as: "All man ... and then some". He was a macho man with a good heart, many described him as the epitome of masculinity and with his trademark Gable grin he just oozed with on screen charm and intense personality.

Gable worked his way up the showbiz ladder doing the usual rounds of stage and bit parts as an extra until he decided to take acting lessons and married his teacher Josephine Dillon who was 17 years his senior. From day 1 Josephine knew he was destined for greatness and in later years she was quoted as saying about Clark Gable: "I always knew that one day Clark would be a big star and not need me anymore. I told him that if he ever truly wanted a divorce, I would give it to him. The fact is he has paid off the mortgage and overdue property taxes on my home. He also had my studio repaired and repainted".

By 1931 he was top billing starring alongside the likes of Greta Garbo in "Susan Lenox" and Joan Crawford in "Laughing Sinners". He became MGM's favourite leading man and for the next 30 years he lived up to his moniker as "The King Of Hollywood". There were 5 marriages, an Oscar, an all time No 1 box office hit with "Gone With The Wind" and the biggest heartbreak of his life with the loss of his 3rd wife and one true love Carole Lombard.

It was January 1942 and Carole had been in Indiana for a war bond rally and decided to fly back to Los Angeles, the plane refuelled in Las Vegas then shortly after take off it crashed into the Potosi Mountain's killing all on board. Clark was absolutely devastated by her death, he had to get away and enlisted into the U.S. air force and saw action in WW2 where he flew at least 5 missions as an air gunner.

By the time he was discharged from military service in 1944 he was rewarded with the Distinguished Flying Cross and Air Medal for his valour in combat. Back in Hollywood he resurrected his acting career but he was never the same man both on and off the screen. The studio's lined up the roles and the long list of leading ladies he starred with grew to include the likes of Ava Gardner, Doris Day, Jane Russell and Sophia Loren.

His last movie was The Misfits which was directed by John Huston and based on the screenplay by Arthur Miller, it was released to critical acclaim in 1961 and in a twist of fate it also turned out to be the last film that Marilyn Monroe starred in as she died shortly after its release.

Despite being in his 5th marriage Clark Gable was buried next to his 3rd wife Carole Lombard as he drew the curtain down one last time on his career as the King Of Hollywood during its golden age.

When he was not charming his leading ladies with that glint in his eye he was also good for a one liner, so this is my compilation of 15 of the best Clark Gable quotes

Film director John Huston described him thus: "Clark Gable was the only real he-man I've ever known, of all the actors I've met"

The director Frank Capra recognised that down to earth roles suited his acting style and for his Oscar winning lead actor performance he quipped: "It Happened One Night is the real Gable. He was never able to play that kind of character except in that one film"

The actress Elizabeth Taylor said he oozed class on and off screen: "He was the epitome of the movie star -- so romantic, such bearing, such friendliness"

Doris Day summed up his sex appeal: "He was as masculine as any man I've ever known, and as much a little boy as a grown man could be – it was this combination that had such a devastating effect on women"

Joan Crawford who co-starred in 8 movies with him said: "He was a king wherever he went. He walked like one, he behaved like one, and he was the most masculine man that I have ever met in my life" 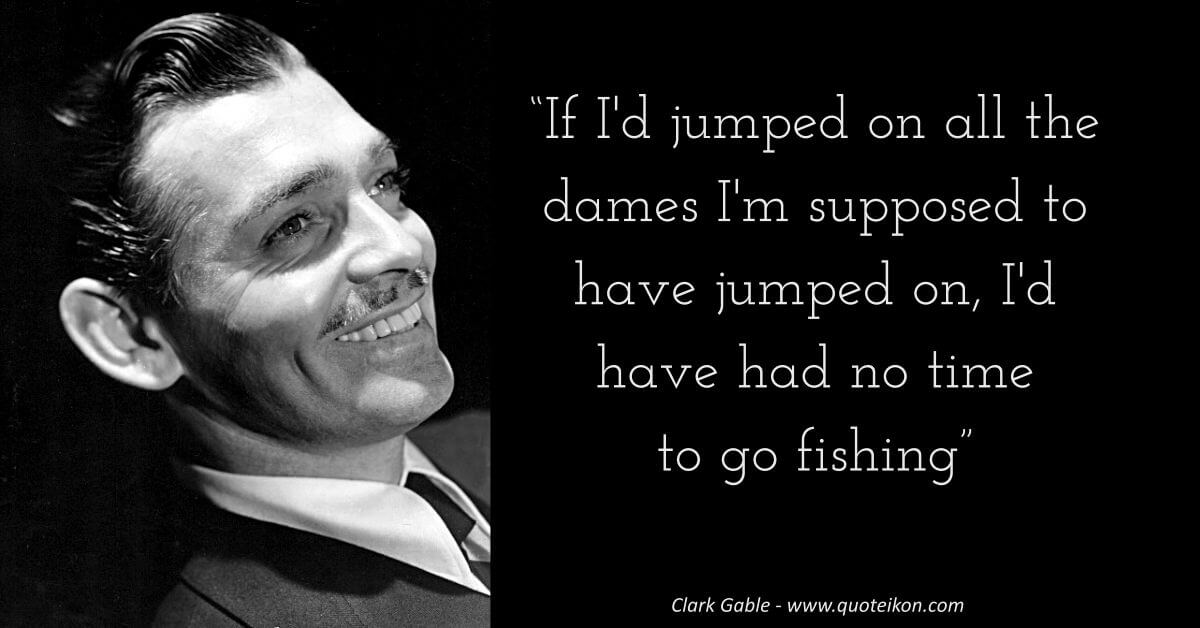