Burt Bacharach is the multi award winning composer whose career has spanned seven decades whereby the enduring quality of his work has made him one of the most important contributors to popular music of all time. His ability to interlace sophisticated harmonies with catchy lyrics gave his music a timeless durability that has seen in excess of 1,000 artists record his songs.

Bacharach's passion for music was clear from the early days where he enjoyed the swinging sounds of the Big Band era and a love for jazz which he practiced endlessly on the piano. With music running through his veins he immersed himself in the fresh sounds of the bebop bands and decided a career in music had to be turned from a dream into his reality.

In the early part of his career he worked as a pianist and conductor until in 1956 he got a big break with the opportunity to work with the German movie actress and singer Marlene Dietrich where he spent six years working part time as her musical arranger and conductor as she went on a worldwide tour.

It was during this period Bacharach met the lyricist Hal David who combined to write "Magic Moments" for Perry Como that made it to number 4 in the U.S. charts. This was the start of a long association that saw them create a conveyor belt of non stop hits right through to the 1980's.

It was the 1960's when it really took off as Burt struck a chord with Dionne Warwick and they combined to release a string of hit records including "Walk On By" in 1964 and "Do You Know the Way to San Jose" and "I Say a Little Prayer", both in 1967. A whole host of other artists jumped on the Bacharach bandwagon as his reputation to choose the right song for the artist grew stronger with Dusty Springfield being a case in kind as he wrote "The Look Of Love" for her to sing in the 1967 Bond movie "Casino Royale".

As the decades passed his songs are still making the charts as artists delve into the Bacharach catalogue for the reassurance of musical quality from a tuneful master that has accrued six Grammy Awards and three Academy awards during one of the longest musical careers of all time.

First and foremost remembered for his music, he was also an affable interviewee who was always quick with a snappy quip, so this is my compilation of 20 of the best Burt Bacharach quotes.

The legendary crooner Frank Sinatra once quipped: "He writes in hat sizes. Seven and three-fourths"

The lyricist Sammy Cahn talked of the ladies man: "Burt was the only songwriter who didn't look like a dentist, and his charms were not lost on an array of women"

The singer Vic Damone described him thus: "Burt was clearly bound to go out on his own. He was an exceptionally talented, classically trained pianist, with very clear ideas on the musicality of songs, how they should be played, and what they should sound like. I appreciated his musical gifts"

The actress Marlene Dietrich was impressed to say: "As a man, he embodied everything a woman could wish for. ... How many such men are there? For me he was the only one"

The critic Rex Reed described his performance as a conductor: "He's a hurricane that knows where it's heading"

The singer Dionne Warwick once described his sex appeal as having: "the little-boy quality about him that endears him to the opposite sex"

Dionne Warwick also spoke of her long association with the composer: "Working with Burt is not a bit different from how it used to be. He expects me to deliver and I can. He knows what I'm going to do before I do it, and the same with me. That's how intertwined we've been"

His music collaborator Hal David was quoted as saying: "I just instinctively knew what Burt was looking for. The ones that come out of the blue are usually the best ones" 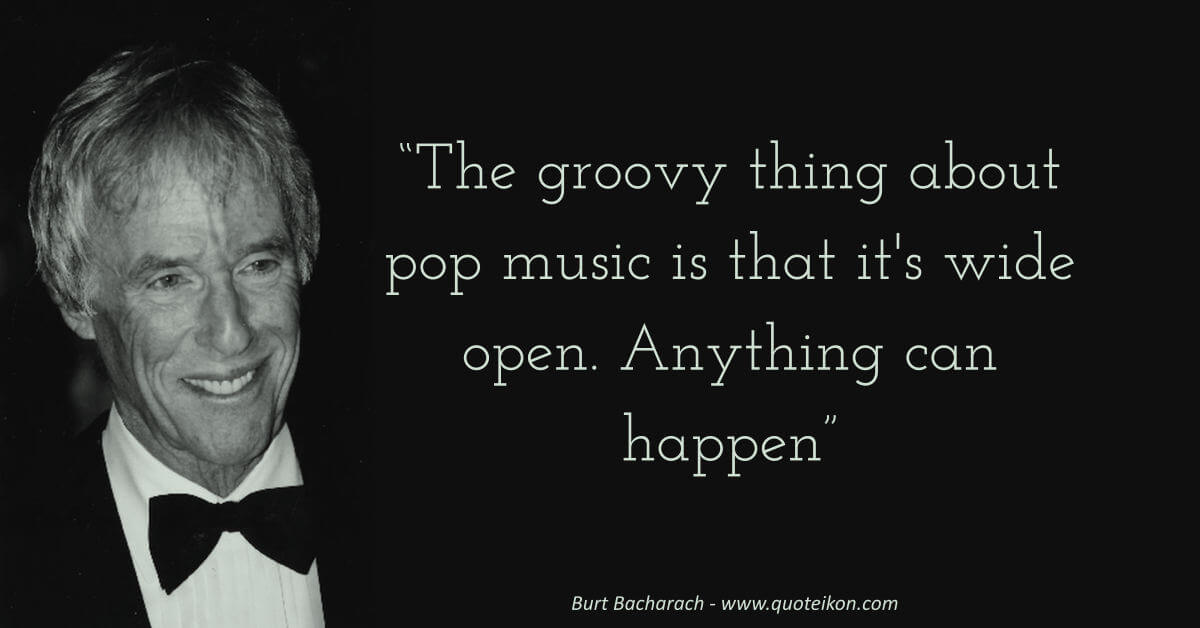