Thales of Miletus - The Father of Science

Throughout history, there have been many periods of enlightenment. Necessity always found one man seeking answers to pertinent questions. Going back two and a half millennia there was a man famously known as the first of the seven sages of Greek antiquity. His name was Thales of Miletus and he is often called The Father of Science.

Necessity may have been the mother of invention. But necessity needed structure and provable rules. The era of Thales is where science woke from an enduring slumber of mystical beliefs and supernatural explanations.

Thales viewed all aspects of life through a critical lens of questioning. He introduced a scientific method of thinking across a broad spectrum of subjects from the natural world to mathematics to astrology and philosophy.

Theories were investigated, evidence based hypothesis became a starting point for further examination. Thales explored the basic principles of the origin of matter. He ushered geometry into Greek learning and demonstrated how to use the length of shadows to calculate the height of structures.

He was the pioneer of western philosophy. Thales was the inspiration behind the Milesian school in the Ionian town of Miletus. His inspiring mind influenced Anaximander, Anaximenes, Pythagoras, Solon and Xenophanes. He was the first to use reason and proof based on empirical evidence.

Aristotle was impressed to say Thales was the founder of natural philosophy. Indeed, back in the the day, Thales' scientific explanation of natural phenomena was controversial as he offered alternatives to the creation myths surrounding the Greek gods.

28th May 585 BC is a date that has gone down in history. It is the day that Thales predicted a solar eclipse would occur and he was right. The writer Isaac Asimov described the event it as the birth of science. This event became known as the eclipse of Thales.

Although Thales' prediction dominated the limelight, the eclipse also marked another intriguing event as visibly shocked soldiers downed their weapons on the battlefield to signal the end of a six year war between the Lydians and the Medes.

Great thinkers leave their mark on the world. The thoughts of Thales are testament to the school of thinking that ancient Greece was the cradle of western civilisation. Thales was the prominent Presocratic philosopher in the Milesian triumvirate that included Anaximander and Anaximenes.

The annals of history have described Thales as the father of science. They call him the first Greek mathematician. Thales gave meaning to the pursuit of rational reasoning leading to conclusive proof. He was the daddy at the birth of science.

Quotes About Thales of Miletus

Ralph Waldo Emerson placed him in good historical company: "No one can read the history of astronomy without perceiving that Copernicus, Newton, Laplace, are not new men, or a new kind of men, but that Thales, Anaximenes, Hipparchus, Empodocles, Aristorchus, Pythagorus, Oenipodes, had anticipated them"

The historian Colin R. Fletcher summed him up thus: "Thales had at his command the techniques of observation, experimentation, superposition and deduction...he has proved himself mathematician"

Aristotle made this comparison: "That which Thales and Anaxagoras know, people will call unusual, astounding, difficult, divine but—useless, since human possessions were of no concern to those two"

Aristotle also mused on this: "To Thales the primary question was not what do we know, but how do we know it"

Bertrand Russell got straight to the point with this statement: "Western philosophy begins with Thales"

This assessment by the philosopher Francis Bacon got back to basics: "Thales asserted Water to be the principle of things. For he saw that matter was principally dispensed in moisture, and moisture in water; and it seemed proper to make that the principle of things, in which the virtues and powers of beings, and especially the elements of their generations and restorations, were chiefly found"

Proclus the philosopher recognised his contribution: "Thales was the first to demonstrate that the circle is bisected by the diameter, the cause of the bisection being the unimpeded passage of the straight line through the centre"

The philosopher Simplicius of Cilicia gave this assessment: "According to tradition, Thales is the first to reveal the study of nature to the Greeks; although he had many predecessors, in Theopharastus' view, he so surpassed them as to eclipse everyone before him"

The writer Dennis Batchelder shared this observation: "Thales had a motto: time is wisest because it discovers everything. We still live by that motto - we mark the time and aid the discoveries by keeping the soul lines intact"

The Roman statesman Cicero talked of his philosophy: "Thales, assures that water is the principle of all things; and that God is that Mind which shaped and created all things from water"

The British mathematician Walter William Rouse Ball studied the history of said subject: "It seems probable that the early Greeks were largely indebted to the Phoenicians for their knowledge of practical arithmetic or the art of calculation, and perhaps also learnt from them a few properties of numbers. It may be worthy of note that Pythagoras was a Phoenician; and according to Herodotus, but this is more doubtful, Thales was also of that race"

Another mathematician, Eric Temple Bell, shared this interesting comparison: "There is an equally persistent tradition that it was Thales... who first proved a theorem in geometry. But there seems to be no claim that Thales... proposed the inerrant tactic of definitions, postulates, deductive proof, theorem as a universal method in mathematics. ...in attributing any specific advance to Pythagoras himself, it must be remembered that the Pythagorean brotherhood was one of the world's earliest unpriestly cooperative scientific societies, if not the first, and that its members assigned the common work of all by mutual consent to their master"

The author Tobias Dantzig was impressed to say: "The more one studies the period of Thales—the more one compares the knowledge he bequeathed to prosterity with the one he had found when he began his work—the more does his mathematical stature grow, until one is impelled to range Thales with such figures as Archimedes, Fermat, Newton, Gauss and Poincaré"

Plato told the tale of the eager astronomer: "While [Thales] was studying the stars and looking upwards, he fell into a pit, and a neat, witty Thracian servant girl jeered at him, they say, because he was so eager to know the things in the sky that he could not see what was there before him at his very feet"

The biographer Diogenes Laertius immortalised him in verse: "As Thales watched the games one festal day, the fierce sun smote him and he passed away"

Lobon of Argos was inspired to verse: "Miletus, fairest of Ionian cities, Gave birth to Thales, great astronomer, Wisest of mortals in all kinds of knowledge"

The philosopher, Timon of Athens described him thus: "Like Thales, wisest of the seven sages, that great astronomer"

The inscription on Thales' tomb read: "You see this tomb is small - but recollect, The fame of Thales reaches to the skies"

Tom Mandel waited two-and-a-half millennia to write this on 28th May 1990 in the Chicago Sun Times: "The day was May 28. The year was 585 B.C. The place was Miletus, a seaport town across the Aegean sea from Athens, Greece. Thales of Miletus peered into the sky. Soon an eerie darkness enveloped the countryside. Thales of Miletus may have smiled as the solar eclipse he had predicted actually took place. The science writer Isaac Asimov describes this eclipse as the earliest event science can date to the day and suggests that this day may have been the birth of science. I would like to second the motion, and call for a celebration. Exactly 2,575 years ago, Thales of Miletus conducted a scientific experiment and succeeded" 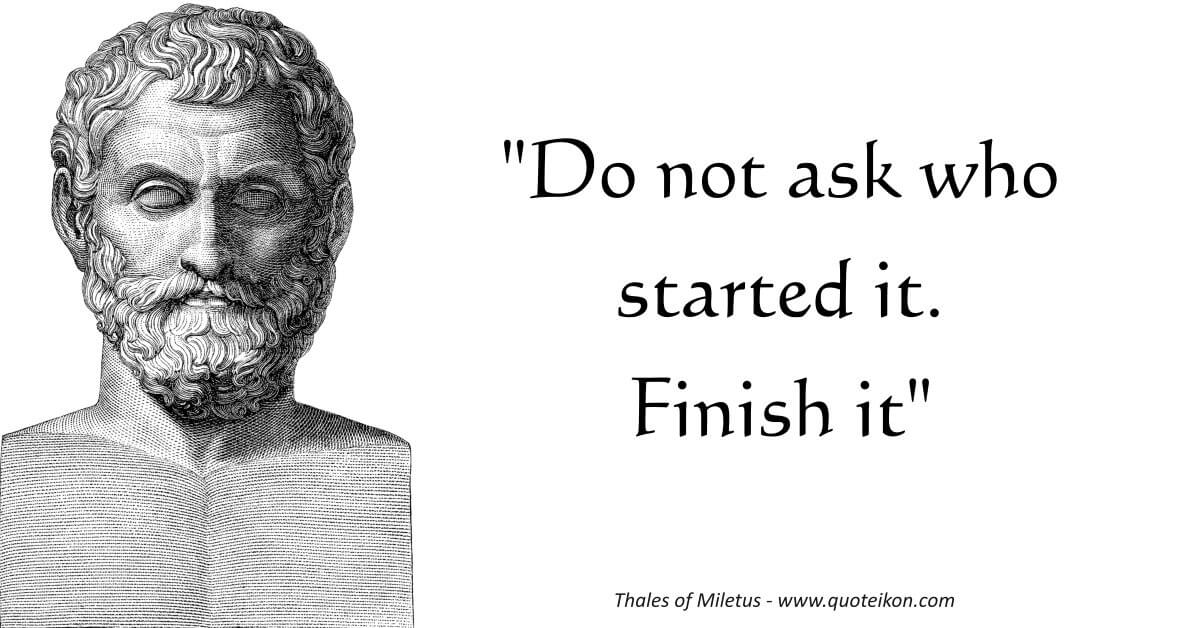