He was much more than just the founder of the Turkish nation. He may have been its first president, but first and foremost he was a soldier and a warrior long before he became the most revered statesman in Turkish history. His name is Mustafa Kemal Atatürk and his story is legendary in Turkey and well respected in the corridors of world power.

From a humble background this soldier turned statesman emerged from the fall of the Ottoman empire to galvanise the people against seemingly insurmountable odds. Despite the spoils of war being imposed at the end of WW1, Atatürk did the unthinkable and broke the stranglehold of colonialism that was being imposed on the post-war vanquished.

Gaining victories in the style of David against Goliath was a speciality that Mustafa excelled at. Even before he graduated from military college he longed for a military career and freedom for the people of Turkey from the Sultanate under the auspices of the Ottoman empire.

His military career was exemplary. Ataturk served with distinction fighting against the Italians in Libya in 1911. He further cut his military teeth in the Balkan wars from 1912 through to 1913. But it was in WW1 where he was to really make a name for himself on the world stage.

Mustafa Kemal, as he was then known, supercharged his military reputation during the Allied invasion of the Dardanelles in 1915. His defiance in the face of the military might of the combined British, French and ANZAC forces on the Gallipoli peninsula is the stuff of legends. He became a national hero by repelling attack after attack between 17th February 1915 to 9th January 1916. Approximately 250,000 lives were lost on both sides as Mustafa laid waste to the finest military strategies the Allies could muster.

His rousing speeches rallied his troops to the nationalistic cause as he inspired them to defy the odds in one of the epic and bloodiest battles of WW1. When the Allies finally called off their invasion he was rewarded with a deserved promotion from Colonel to General and his name became the toast of Turkish folklore.

Mustafa served in further theatres of combat in WW1. He took command of the seventh army in Palestine and he gained another major victory over the British at Aleppo in 1918. He held a proud WW1 record that most western generals would envy. But once the armistice was signed politics became the new battleground and the Allies then busied themselves vying for the spoils of war as they were carving up the remnants of the Ottoman empire.

His tactical prowess in the theatre of war had made its mark. The name of Mustafa Kemal would be long remembered by the armies of his Allied enemies. Little did they know that he would be back and again prove to be their nemesis in the forthcoming war of independence.

The Greeks and Italians both had big designs on vast swathes of Turkey. But Mustafa Kemal had other ideas as he mobilised a liberation army in Anatolia in 1919 that set about organising a resistance against the invading forces.

Victories at the battles of Inönü (1920), Sakarya (1921) and the great offensive at the battle of Dumlupinar (1922) proved decisive. Mustafa Kemal took the battle to an enemy who had superior technology, weapons and foreign aid yet still forced a succession of highly unlikely victories. He had succeeded where western military strategists predicted he would fail. It seemed inconceivable at the time but he forced the colonising Allies back to the negotiating table.

The result was pure Turkish delight. The Lausanne Peace Treaty was signed in 1923 granting independence to the new state of Turkey. The Sultanate was abolished on 1st November 1922 meaning all links to the Ottoman empire were broken and Turkey became a secular republic in 1923 with Mustafa Kemal Atatürk as its first President.

Mustafa Kemal had established the first single party non-communist state and it was a regime which stayed intact until the end of WW2. He was a ruthless meritocrat who was more interested in a persons ability and loyalty to the state than their religious or ethnic background. Atatürk created an environment where building up the new Turkish Republic was of paramount importance and the people were happy to oblige.

In 1924 he abolished the Caliphate but he still allowed Islam to be practiced. Atatürk then went into an ambitious period of social and political reforms that saw the emancipation of women, the introduction of a system based on the Swiss civil and legal codes as well as adopting the western calendar and alphabet. Dress codes were relaxed and Mustafa oversaw major educational and economic reforms that would move Turkey away from the medieval mindset that had long dominated its people into a more progressive and modernised world.

The transformation was as dramatic as it was remarkable. Heads of state from around the world, including from country's who had once tried to subjugate the Turkish people were now singing the praises of Mustafa Kemal Atatürk. He had become the inspiration for all aspiring nations wishing to free themselves from the shackles of colonisation.

Atatürk was a soldier, a battle field master tactician, a visionary and one of the greatest statesmen of the twentieth century. He was living proof that no matter how high the odds are stacked against you, that you can pick yourself up and work with the tools you have available and still rise back up to the top if you have the belief and the will power to succeed.

Mustafa Kemal Atatürk was an inspirational leader of men who understood the needs of his people and how to motivate them to prosper in the modern world. His legacy of two decades in power set Turkey up to become a viable democracy and he will be forever revered by the Turkish people as the leader who delivered their liberation from the jaws of colonialism. He was a larger than life leader whose persona lives on with his iconography emblazoned across the country in streets, squares, offices, shops and houses. But most of all, Mustafa Kemal Atatürk will be remembered as the father of the Turkish Republic.

He spoke with an eloquent tongue that inspired a nation with his every word, so this is my compilation of 25 of the best Mustafa Kemal Ataturk quotes.

But the best way to gauge the greatness of any man is by the opinion of others. I have listed below the names of Presidents, Prime Ministers and other eminent men who bear witness to one the the greatest leaders of the twentieth century. It is the most fitting tribute that can be paid because the words spoken here tell you all you need to know about Mustafa Kemal Atatürk.

The Turkish general Sener Eruygur was full of praise when he called him: "The cement of the Turkish nation, who provided the Turks with hope in a time of despair"

The US President John F. Kennedy recognised the greatness in the man: "The name of Atatürk brings to mind the historic accomplishments of one of the great men of this century, his inspired leadership of the Turkish People, his perceptive understanding of the modern world and his boldness as a military leader"

The US General Douglas MacArthur described him thus: "He was a military-statesman, one of the greatest leaders of our era. He ensured that Turkey got its rightful place among the most advanced nations. Also, he gave the feeling of support and self-confidence to the Turks that form the foundation stone of a nation’s greatness. I take great pride in being one of Ataturk’s loyal friends"

The British statesman Winston Churchill shared this epitaph: "Ataturk’s death is not only a loss for the country, but for Europe is the greatest loss, he who saved Turkey in the war and who revived anew the Turkish nation after the war. The sincere tears shed after him by all classes of people is nothing other than an appropriate manifestation to this great hero and modern Turkey’s Ata"

The French leader Charles de Gaulle also paid his respects: "Rest in peace great Ataturk! The flame you kindled burns brilliantly and continues to light our world. And your footprints in history are indelible for those who wish to follow them"

The Fuhrer Adolf Hitler was impressed to say: "Atatürk was the first to show that it is possible to mobilize and regenerate the resources that a country has lost. In this respect Atatürk was a teacher. Mussolini was his first and I his second student"

Benito Mussolini modelled himself on the Turkish leader as he was quoted as calling himself: "The Mustafa Kemal of a Milanese Ankara"

Jawaharlal Nehru wanted to emulate his success: "We have seen what can be done in a brief span of years and even months by Kemal Pasha who is not afraid to break through ancient custom and prejudice. What has been done in Turkey can be done in India"

The US President Franklin D Roosevelt regretted one thing: "My despair today is that I missed the chance of meeting that great man whom history books glorify lavishly. His achievements are mind boggling"

The British Prime Minister David Lloyd George in answering to parliament about the British army retreat from Anatolia in 1922: "Dear Sirs, you may see an exceptional genius in centuries. It is very unfortunate for us that the great genius of this era came up from the Turkish Nation. There was nothing to be done against the brilliance of Mustafa Kemal"

The Russian revolutionary Vladimir Lenin was inspired to say this in 1921: "Mustafa Kemal was not a socialist. But it can be perceived that he is a good organizer, with great understanding, progressive, with good thoughts and an intelligent leader. He is carrying out a war of independence against those plunderers. I am believing that he will break the pride of the imperialists and that he will beat the Sultan together with his friends"

The author Ernest Hemingway described this scene: "The West and the East came face to face at the second class coastal town of Mudanya on a crooked road covered with dust on the hot Marmara coast. Despite the English flag ship “Iron-Duke’s” ash-colored deathly turrets that transported the Allied generals for negotiations with Ismet Pasha, the Westerners had come here to beg for peace, not to ask for peace or to dictate the conditions. These negotiations demonstrate the end of Europe’s dominance over Asia, because as everyone knows, Mustafa Kemal got rid of all the Greeks"

Former US President Bill Clinton paid him this tribute: "I have no doubt that Ataturk is the greatest statesman of this millennium as he is the only leader who succeeded to become the leader of the century, not of the year"

The Prime Minister of Japan Hayato Ikeda recognised the great value in his work: "We feel a great admiration for Atatürk in his efforts towards ensuring the modernization of Turkish society by separating religion and politics from each other and by carrying out the Turkish Language Reforms"

The author Andrew Mango gave this short observation: "Above all, he was a builder, the greatest nation-builder of modern times"

The Pakistani Governor General Mohammad Ali Jinnah shared this assessment: "The exploits of your leaders in many a historic field of battle; the progress of your Revolution; the rise and career of the great Atatürk, his revitalization of your nation by his great statesmanship, courage and foresight all these stirring events are well-known to the people of Pakistan" 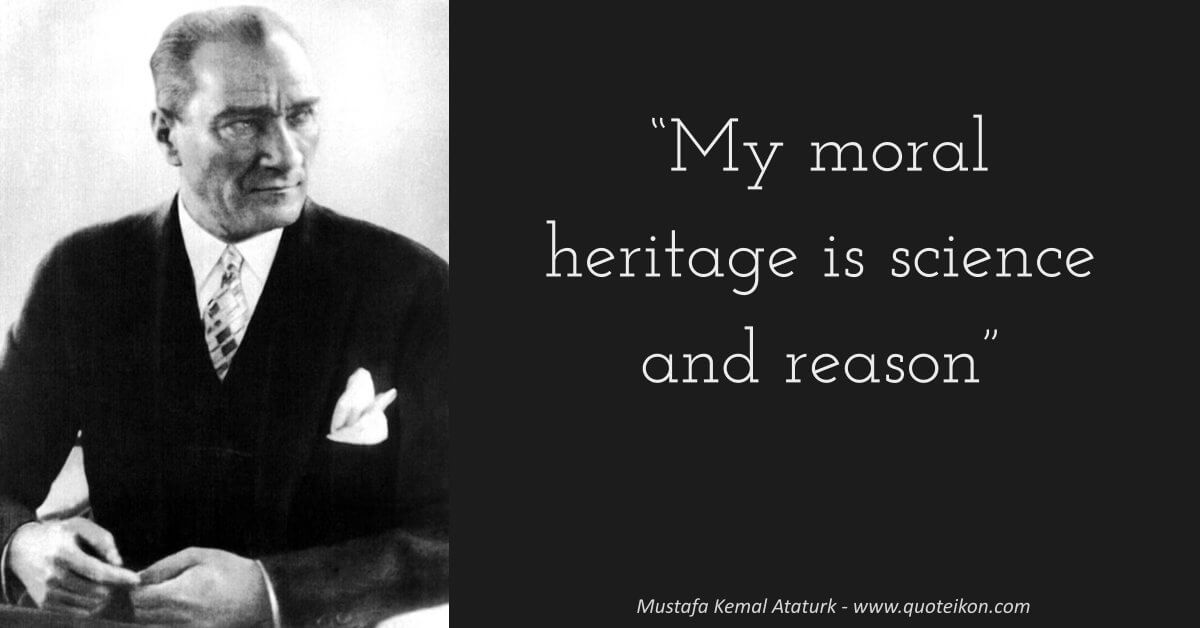