Benito Mussolini was the charismatic founder of Fascism who led his band of black shirts to power where he reigned as the Italian leader from 31st October 1922 until 25th July 1943. Hailing from a poor family in the north east of Italy his father was a staunch socialist whose early influence on Benito created a mind set susceptible to political persuasion as a means of progression. His mother was a school teacher and the young Mussolini developed a passion for reading where he would later glean inspiration from the works of philosopher Friedrich Nietzsche and the socialist Charles Péguy.

In 1902 he went to Switzerland to seek work and involved himself in the socialist movement there working as a journalist for the left wing newspaper L'Avvenire del Lavoratore, he became an activist organising workers meetings and giving speeches until the Swiss authorities arrested and deported him. Later Benito returned to Switzerland as a student and enrolled at the University of Lausanne to further his education. Mussolini was a proud Italian who was articulate and had his finger on the pulse of the mood of the Italian people and he was very adept at exploiting this with his writing. On his return to Italy he took up the socialist cause writing for various left wing newspapers where he gained a big readership by virtue of him being in tune with the needs of the Italian people.

When WW1 erupted in Europe he initially followed the socialist line of thinking and opposed the war but later he changed his stance as he sensed the opportunity for Italy to regain Italian speaking lands from the Habsburg empire. This resulted in his ouster from the Italian Socialist party and the beginning of Mussolini's transformation leading to the creation of his fascist political agenda. He had the bravery to back his words with his deeds and joined the Italian army where he served at the front for nine months until he was wounded by a mortar shell. Upon his discharge from hospital in 1917 he took up a role as editor of the Il Popolo d'Italia newspaper where he continued his pro-war propaganda with a passionate nationalistic slant as he sensed the opportunity to revive the Italian nation.

Mussolini's thinking grew further apart from socialism and his policies developed to expand the tentacles of the Italian empire in line with the Roman sphere of influence that controlled much of the Mediterranean in days gone by. In 1919 he formed the Italian Fasci of Combat which led to the creation of the National Fascist Party in 1921. Mussolini then rode a wave of nationalism that culminated in the March On Rome where 30,000 of his black shirt supporters descended on the capital city and when King Victor Emmanuel III refused the then Prime Minister Luigi Facta's request for a state of emergency the government collapsed. The king had little choice but to offer Mussolini the prime ministership and restore order which he did. Up until this point he made few errors of judgement but the test of holding the reins of power would be the ultimate judge of Mussolini as they are with all leaders. He spent the next few years consolidating his power until he became a dictator that would rule Italy until his ouster as leader in 1943.

Mussolini was always a loyal Italian who wanted the best for his people, he truly believed he could bring Italy back to a position as a leader on the world stage but his ambitious grand scheme of things to come blurred his vision and instead of slowly building things up he envisioned short cuts to success that were untenable. After forming an alliance with Adolf Hitler he then hedged his bets until finally opting to join the war on Germany's side and it was his fateful decisions of WW2 that was to seal his ultimate destiny in the annals of history. After the allies success in Italy in 1945 he tried to flee to Spain via Switzerland but was caught by Italian partisans who executed him and strung him up by his feet in Milan for all the world to see.

Benito was a great man whose ego surpassed his realistic capabilities of leadership in his era, for a time he inspired a nation, in his speeches he gave them belief where they had none, but his vision of himself as Caesar ruling the roost over the new Roman empire smacked of delusions of grandeur in the mind of an over ambitious leader allowing pride to dictate over pragmatism. For all his bluster he was always quick with his words of inspiration. So this is my compilation of 25 of the best Benito Mussolini quotes.

The author David Ramsay Steele spoke kindly of his early years: "From 1912 to 1914, Mussolini was the Che Guevara of his day, a living saint of leftism. Handsome, courageous, charismatic, an erudite Marxist, a riveting speaker and writer, a dedicated class warrior to the core, he was the peerless duce of the Italian Left"

In 1941 his axis ally Adolf Hitler was impressed to say: "As I walked with him in the gardens of the Villa Borghese, I could easily compare his profile with that of the Roman busts, and I realized he was one of the Caesars. There's no doubt at all that Mussolini is the heir of the great men of that period"

The historian Arthur M. Schlesinger, Jr. shared this observation about the 32nd U.S. President: "Roosevelt had no illusions about revolution. Mussolini and Stalin seemed to him ‘not mere distant relatives’ but ‘blood brothers.’"

Vladimir Lenin rued the loss of a comrade when he said: "What a waste that we lost Mussolini. He is a first-rate man who would have led our party to power in Italy"

Comrade Leon Trotsky also recognised what he could have done for socialism: "He was the only man who could have brought about the revolution of the proletariat in Italy"

The historian Paul Bede Johnson described him thus: "Mussolini was a reluctant fascist because, underneath, he remained a Marxist, albeit a heretical one"

He found an unlikely ally in U.S. President Ronald Reagan who tongue in cheek said: "Fascism was really the basis for the New Deal. It was Mussolini's success in Italy, with his government-directed economy, that led the early New Dealers to say: 'But Mussolini keeps the trains running on time'." 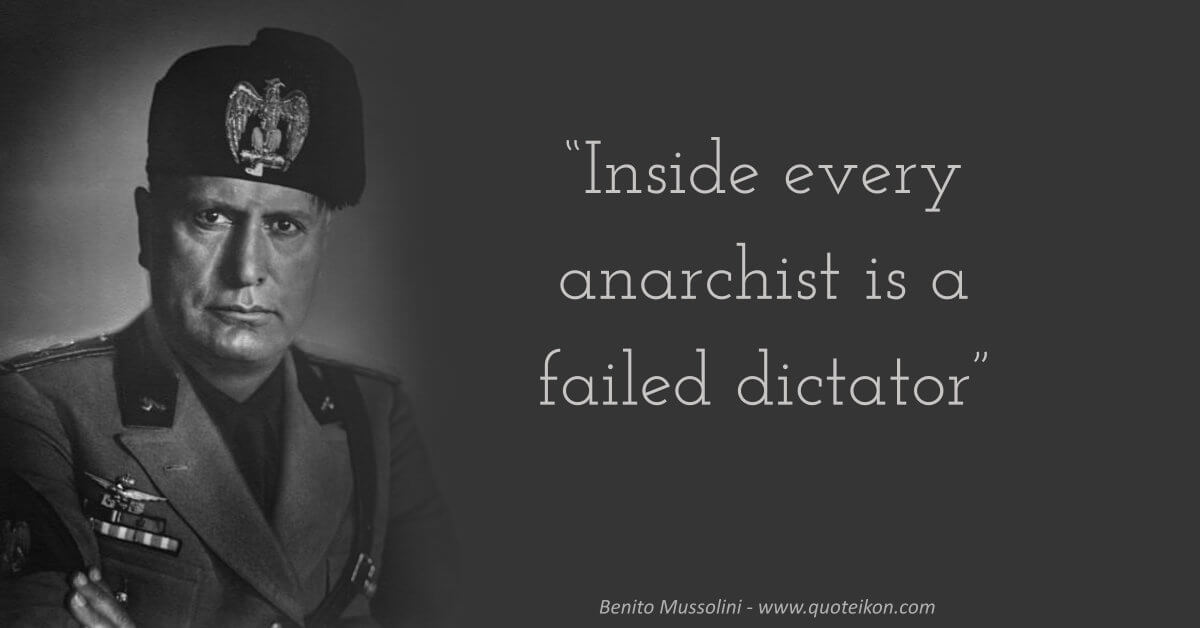