Charles De Gaulle was the patriot who put pride back into the French nation during WWII after the Philippe Pétain governments capitulation to the Adolf Hitler inspired Nazi war machine in 1940. De Gaulle went to London and set about broadcasting as the leader of the free French and set up a government in exile.

At first De Gaulle gained no traction with his patriotic French speeches but that all changed when the Pétain government under German control started to demonise him. They very publically stripped him of his rank as a general then displayed his name as a traitor on posters around France but in effect all they succeeded in doing was made him the only French leader who was actually trying be anti German, this was something that the French people could associate with.

This was the beginning of the making of Charles de Gaulle, although later he admitted to a friend that: "In reality we are on the stage of a theatre where I have been keeping up the illusion since 1940. I am trying to give France the appearance of a solid, firm, confident and expanding country, while it is a worn-out nation.... The whole thing is a perpetual illusion". It was indeed as he had no government, no army and no advisors of his choice, all he had was his uniform and the stage the British gave him to articulate his views.

He seized his opportunity not with the ambitions to satisfy personal gains but with the belief in the French republican system and their freedom to self govern. Within 4 years he was marching proudly down the Champ de Elysees as one of the liberators of Paris and his ultimate destiny was set.

Post WWII he briefly led France for 2 years before his resignation through bewilderment at the political bickering. In 1958 the Algerian crisis reared its head and plunged France into a crisis that needed a true statesman to lead them out of.

De Gaulle rose from his retirement to steady the ship and become president of the 5th French republic where he remained in office from 8th January 1959 until 28th April 1969. Like all true statesmen he was good for a one liner also so here is my compilation of 18 of the best Charles de Gaulle quotes

Winston Churchill once quipped about de Gaulle: "He thinks he's Joan of Arc, but I can't get my bloody bishops to burn him"

Dwight D. Eisenhower referred to Charles de Gaulle in a letter to Roosevelt: "From the purely military viewpoint we must . . . deal with him alone"

The British prime minister Edward Heath spoke highly of him: "He was sustained by an austere faith; inspired by an unswerving patriotism; and guided by an uncompromising loyalty to the service of France"

The journalist and politician Georges Boris who was also in exile during WWII said about him: "De Gaulle gave me back honour, the possibility of being able to look people in the face again.... To a large degree, his unwillingness to bend, his intransigence are willed"

Before he became U.S. president Richard Nixon was quoted as saying of him: "He did not try to put on airs but an aura of majesty seemed to envelop him.... his performance, and I do not use that word disparagingly; was breathtaking" 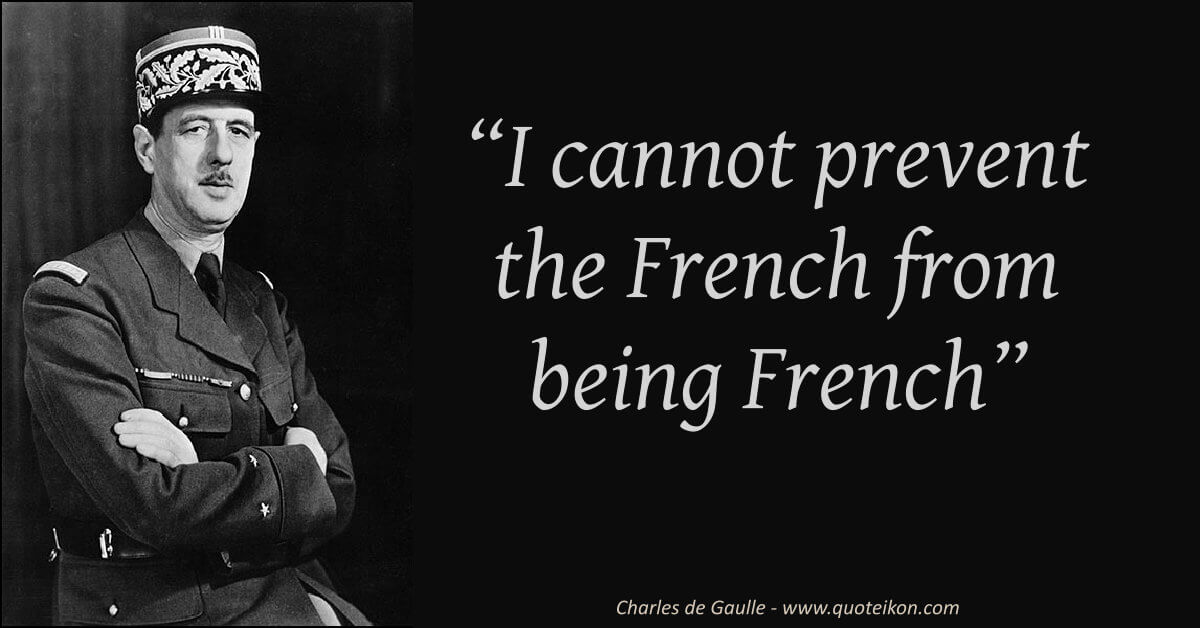