David Lloyd George emerged from the green landscape of his Welsh ancestry to climb the political ladder that saw him become the first true British statesman of the 20th century. Born as David George he changed his name in honour of his uncle Richard Lloyd who took on the responsibility of raising and educating him after the death of his father William George.

His uncle was a great inspiration for the youthful David and he encouraged him to go into the legal profession and then onto politics. His eloquent speeches were backed up by action as he built a reputation for getting things done. In 1906 he was awarded the position of President of the Board of Trade and he joined the Liberal governments' cabinet. The prime minister Herbert Henry Asquith saw his potential and in 1908 promoted him to the position of Chancellor Of The Exchequer.

Lloyd George was to become one of the great social reform chancellors as he introduced state pensions and targeted an end to poverty in the United Kingdom. Initially he opposed Britains entry into WWI but his mind was changed by German aggression culminating in their invasion of Belgium. As WWI progressed it highlighted shortfalls in supplying munitions to the army so in 1915 he was made minister for munitions and he quickly organised the flow from factory to the Western front and he proved again an invaluable asset to the government. His next position was the Secretary of State for War whereby he used all his organisational and communication skills to put some semblance of professionalism into the war effort.

He was however left increasingly frustrated by the weak leadership of the prime minister Asquith and the British generals tactical implementation of strategy and logistics. By 1916 it was obvious a change in political leadership was required to give the war effort an inspirational boost and a cross party agreement offered David Lloyd George the prime ministership. His governmental reforms and leadership were successful and played a big part in the Allies victory in WWI despite a reluctance to change from the British army who were very stuck in their methods of operation.

He was a man of the people, he understood the hardships and sacrifices they made to win the war and on armistice day in 1918 David Lloyd George was famously quoted as saying: "This is no time for words. Our hearts are too full of gratitude to which no tongue can give adequate expression". He went on to be a major player in the signing of the Treaty Of Versailles and he stayed on as prime minister until 1922. He was the last Liberal prime minister to hold the levers of power in the U.K. and since 1922 the Liberal party has never been elected into government.

In the early stages of WWII he recognised the weakness in then prime minister Neville Chamberlain and he actively supported his one time political foe Winston Churchill as the man to lead Britain to victory in the war against Nazi Germany. He delivered powerful speeches with not just venom but real meaning that the people of Britain understood.

As an elegant orator his sharp tongued quips became legendary, so this is my compilation of 20 of the best David Lloyd George quotes

The writer Robert Graves observed: "The power of his rhetoric amazed me... He sucked power from his listeners and spurted it back at them"

David Low a satirical cartoonist of his day conceded: "David Lloyd George was the best-hated statesman of his time, as well as the best loved" 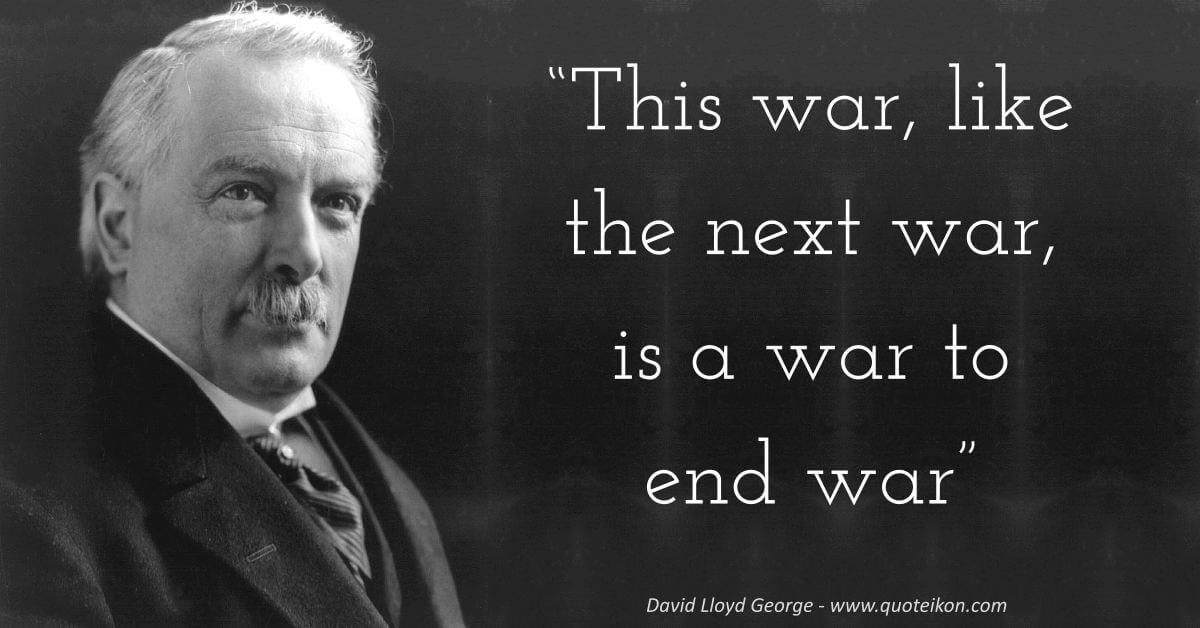