It was the pen of Papa, the swashbuckling adventurer, that turned Ernest Hemingway into one of the most colourful characters in twentieth century literature. As a man he was adept in action or thought. As an author his terse prose packed a powerful punch. What he experienced he wrote.

Ernest Hemingway was the hard living all action American writer who believed you should only write about what you are prepared to experience first hand. After leaving school in 1916 he courted ambitions to enlist for WW1 but the U.S. army rejected his application due to his poor eyesight.

Dejected at being rejected, Hemingway took a post as a junior reporter at the Kansas City Star newspaper.

Still desperate to go to the war by any means, Ernest spotted an advertisement from the Red Cross looking for ambulance drivers. This opened the door to the European war and after sailing to France he quickly made his way to the Italian front where he was initially stationed in Milan.

It was June 1918. By July he was wounded in the line of duty receiving 247 shrapnel wounds to his legs which hospitalised him for six months. It was here he learned of his own mortality as he lamented: "When you go to war as a boy you have a great illusion of immortality. Other people get killed; not you ... Then when you are badly wounded the first time you lose that illusion and you know it can happen to you".

It also carried the kudos of recognition that awarded Hemingway the Italian Silver Medal of Bravery for assisting wounded Italian soldiers despite the severity of his own injuries.

Nothing prepares anyone for war. Let alone an 18 year old boy like Hemingway and while his injuries kept him hospitalised long after the the armistice was signed he returned home a man who took time to adjust to the horrors he had witnessed.

By 1921 Hemingway was firmly back in the saddle. He was married for the first time and the Toronto Star newspaper employed him as a foreign correspondent stationed in Paris.

Ernest adored the Parisian life and the 1920's was a great time to be stationed in a city full of some of the worlds most creative minds such as James Joyce, Pablo Picasso and Ezra Pound. Hemingway was in his element. He lunched and drank with the darlings of the modernism movement. This was a period where he found inspiration in the artistic rather than the machoistic.

But Ernest was no desk bound writer, he needed something to feed off. At heart Hemingway was hands on. He needed the adrenaline of action. It was the fuel that fired his literary soul.

Post WW1 he realised the danger of war. But he also felt the lure of war. When Hemingway was tasked by the Toronto Star to cover the Turkish war of independence he wasted no time and quickly departed Paris on board the Orient Express heading to Istanbul.

Hemingway's description of the Greek military and civilians fleeing in blind panic was mesmerising and overwhelming in equal measure for Canadian readers at breakfast. A daily dose of gobsmacked disbelief was rinsed down with morning coffee as Hemingway's reports filtered in with a clarity of simplistic detail that was too shocking to ignore yet too precise to trivialise.

The Greco-Turkish war established Hemingways name as a war correspondent of merit. As his stature grew, so did his self image. It was during this period that he adopted the moniker Papa. He actively encouraged people to call him Papa because of his dislike for other nicknames people used and he revelled in the patriarchal admiration associated with being called Papa.

There was much bigger fame awaiting the talent of Ernest Hemingway. He had already written some acclaimed short stories such as "In Our time" published in 1925. But the real Hemingway rice bowl would come in the form of novels. His first: "The Sun Also Rises", was mostly written in 1926 lounging in the Parisian café La Closerie des Lilas. It was a runaway success. This novel was also a literary indicator of the greatness to come.

Hot on the heels of The Sun Also Rises was a bigger blockbuster: "A Farewell to Arms". Hemingway drew on his WW1 experiences for inspiration and delivered a hard hitting but touching theme of love that gave the author his best selling novel, to date.

It was now clear in his mind that the tone of the pen of Papa was forged in conflict. Hemingway's time in Paris may have refined his style but he needed the excitement of adrenaline fuelled action to feed off.

His stomach for shells, shrapnel and slaughter was avaricious in the mind of a man consumed with a life of action. The Spanish Civil War was raging. Europe was a powder keg. The Hemingway pen needed to flow from the front line. Papa needed perspiration to deliver literary inspiration.

His luck was as good as his wartime reportage. The North American Newspaper Alliance engaged Hemingways services as a correspondent to cover the Spanish Civil War during 1937 and 1938. Hemingway was no hack. His honed observational skills were turned into measured literary journalism that has inspired countless generations of novelists and reporters.

The Spanish Civil War also inspired Hemingways next novel "For Whom The Bell Tolls" that was published in 1940 to much critical acclaim. The realism of For Whom The Bell Tolls is what makes this book epic. Hemingway writes sublime thought sequences from inside each characters head so well that I, as a reader, felt every moment and emotion as if I was actually there.

As a war correspondent Hemingway went on to write articles during WW2. His all action style saw him aboard one of the landing crafts at Omaha Beach for the D day landings in Normandy. Now he was back in France Ernest Hemingway was on a mission. He had fond memories of his days in Paris and especially the Ritz hotel. The Nazi high command had commandeered the Ritz and Papa wanted to liberate it.

Hemingway marched on Paris with the U.S. 4th infantry division who were supporting the French 2nd armoured division under the command of General Philippe Leclerc. The French forces entered Paris on 25th August 1944. Hemingway managed to tag along with a group of French resistance fighters.

Riding aloft a machine gun toting jeep, Hemingway and his band of resistance fighters managed to avoid the fire fights that the vanguard of the French troops were engaged in.

Once they arrived at the Ritz Hemingway strode in and personally announced its liberation. The Ritz staff were happy to welcome their old friend, but the German high command of Paris were long gone.

The Ritz manager Claude Auzello made a polite request to Ernest that he place his gun back in the jeep outside. It was a wise security measure as he was acutely aware of the celebratory drinking session that was about to unfold.

The liberation of the Ritz has gone down into French folklore. To this day, the Paris Ritz has indulged in nostalgia by naming one of its bar's after Ernest Hemingway.

The soul of Hemingway had been captivated by Paris. But it did not belong there. Ernest was equally at home living on the Cuban coast or his Key West Florida home.

It was Hemingway's time in Cuba that gave him the inspiration to write his Pulitzer prize winning novel "The Old Man And The Sea". First published in 1952, The Old Man And The Sea was cited as a major factor in the award of the 1954 Nobel Prize for literature to Ernest Hemingway. This was Hemingway's swan song as a novelist. He would never again attain such literary heights of excellence.

At his home in Key West, Hemingway had a six toed pet cat that has bred generations of six toed felines that now occupy the neighbourhood surrounding his house which has become a museum in his honour.

Hemingway was a mans man who called a spade a spade and was prepared to stick up for what he believed in. Ernest once had a disagreement with Orson Welles over one of his scripts that escalated into a full blown fist fight. Inevitably, it ended up with both men hugging each other and cracking open a few bottles of Scotch whiskey that they sipped through their bruised lips and inflated ego's.

In 1954 Hemingway suffered the unfortunate luck of being involved in two plane crashes within the space of two days while vacationing in Belgian Congo. He managed to survive albeit with some severe injuries. What followed was the somewhat bemusing experience of reading his own obituaries as Ernest had been reported killed in the second plane accident.

Ernest Hemingway lived his life to the fullest and he wrote his books much the same way making him one of the outstanding American authors of the 20th century.

Hemingway recognised the longevity of art, he once famously said: "A thousand years makes economics silly and a work of art endures forever". Indeed it does, just as death is as certain in a Hemingway novel as it is in real life, so too is the literary reward that echoes through millennia, and this is one author that has yet to cease reverberating.

He was never short of a word or two either, so this is my compilation of 25 of the best Ernest Hemingway quotes

Author James Joyce spoke highly of his friend: "He's a big powerful peasant, as strong as a buffalo. A sportsman. And ready to live the life he writes about. He would never have written it if his body had not allowed him to live it. But giants of his sort are truly modest; there is much more behind Hermingway's form than people know"

The biographer Michael Reynolds was impressed to say: "He left stories and novels so starkly moving that some have become part of our cultural heritage"

New York Times critic Orville Prescott said this about him in 1952: "The master technician once more at the top of his form, doing superbly what he can do better than anyone else"

Literary critic C. Hugh Holman said this of the great novelist: "It was Hemingway's art, rather than the internationally notorious public figure, which had so stretched the boundaries of our world" 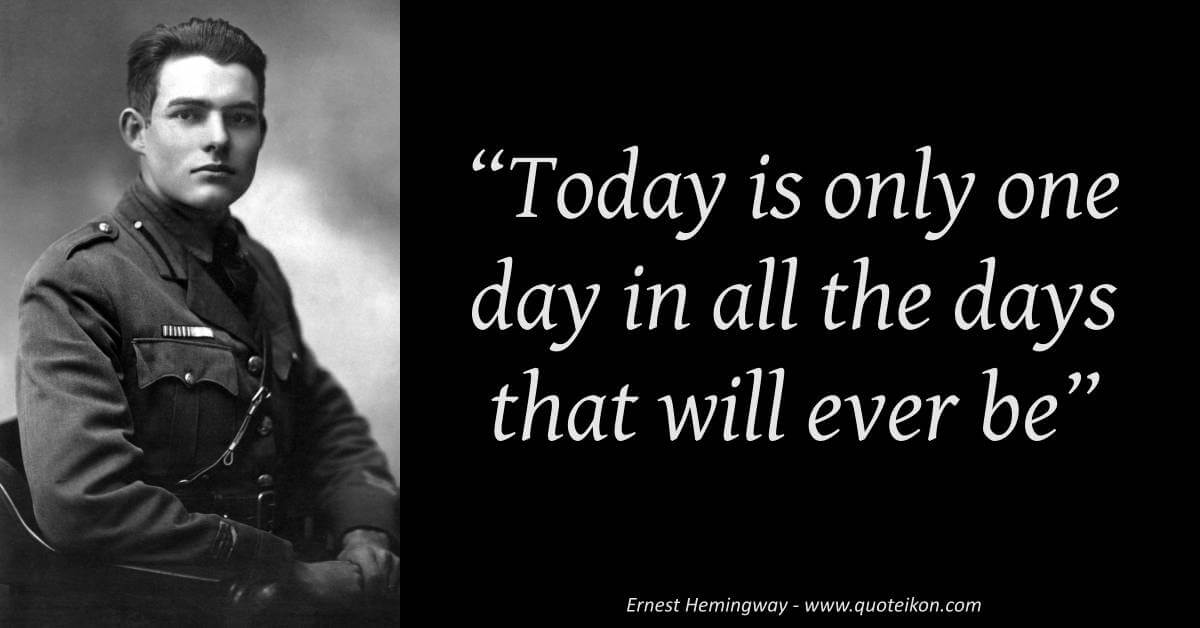