Douglas MacArthur was born into a family steeped in military tradition with his father being awarded the Medal Of Honor for his actions in the battle of Missionary Ridge during the American civil war.

Douglas also opted for a military career and he saw action during the Mexican revolution as well as both world wars. For his heroic service in WWI he was awarded the Distinguished Service Cross two times and the Silver Star on six occasions, but still the Medal of Honor eluded him.

He made no secret of wanting to achieve the same combat award as his father by receiving the Medal of Honor and although he never faced down the Japanese on the front line he was still rewarded with this distinguished medal for his defence of the Philippines in WWII.

Many battles later and MacArthur himself was there in person on board the USS Missouri in September 1945 to accept the Japanese surrender and bring down the curtain on WWII.

He was never afraid to state his opinion but soldiers are there to serve orders and not criticise them so when MacArthur spoke out against President Harry S. Truman's handling of the Korean war he was relieved of his command. This proved to be Trumans biggest mistake as his popularity plunged and to this day Douglas MacArthur is still held in high esteem by the American public.

Criticising presidents aside, this is the list I have compiled of 15 of the best Douglas MacArthur quotes

The historian Walter R. Borneman was full of praise: "America desperately needed a hero, and Douglas MacArthur was the man of the hour"

General Dwight D. Eisenhower was ambivalent in his praise: "Bataan is made to order for him. It's in the public eye; it as made him a public hero; it has all the essentials of drama; and he is acknowledged king on the spot"

The respected naval officer William D. Leahy was impressed to say: "MacArthur's "Old Soldiers Never Die" speech was of such a superlative quality of excellence... that there is no other individual... capable of preparing and delivering a comparable address... The public enthusiasm for General MacArthur in San Francisco and in Washington was a triumph beyond anything that I have ever seen anywhere for anybody"

The revered military man George S. Patton IV summed him up thus: "He was a superb leader and was probably the greatest general this country has ever produced"

President Harry S. Truman did not mince his words: "I fired him because he wouldn't respect the authority of the president. That's the answer to that. I didn't fire him because he was a dumb son of a bitch, although he was, but that's not against the law for generals. If it was, half to three-quarters of them would be in jail" 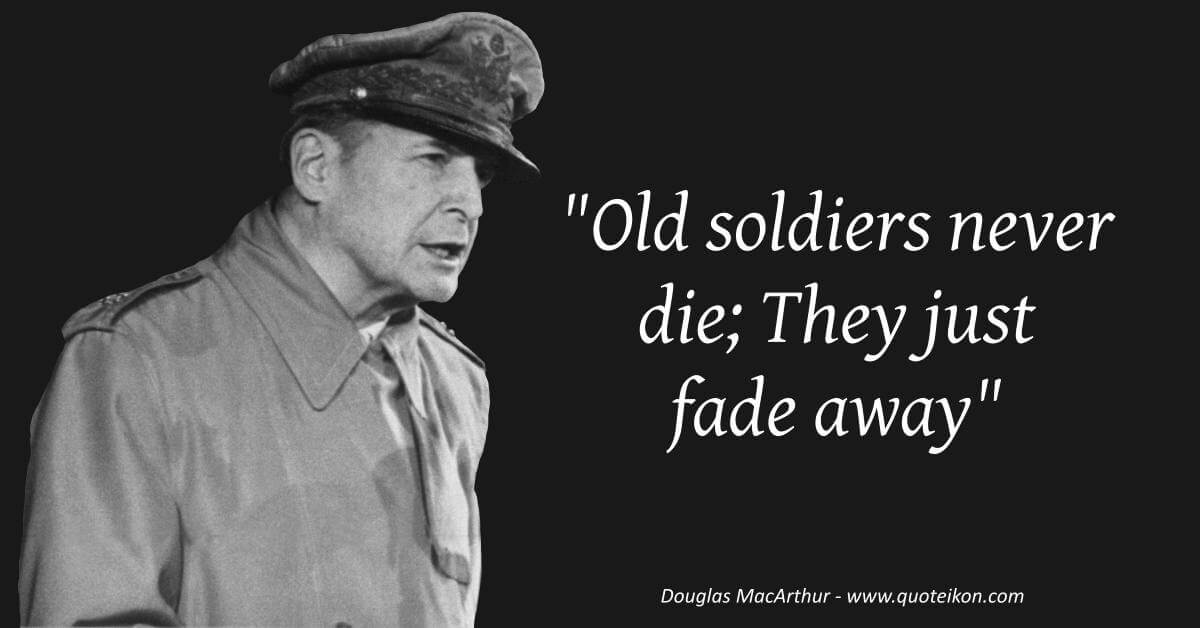