Franklin D Roosevelt is often regarded as the finest American statesman of the twentieth century and is viewed as one of the most popular presidents of all time ranking high in the company of esteemed statesmen such as George Washington, Thomas Jefferson, Abraham Lincoln and John F. Kennedy.

From his first term as President in 1933 Roosevelt endeared himself to the nation by conveying a message of sincere optimism driven by the strength of his policies that were designed to combat the great depression engulfing 1930's America. He was a peoples president who ingratiated himself to the millions of people suffering from economic hardships with a slew of policies designed to utilise the unemployed to expand on the nations infrastructure, providing much needed relief to struggling farmers and targeting the Wall Street business cartels to break up their selfish monopolies.

Roosevelt found the money to pay for it all by slashing the defence budget, reducing the federal budget, taking the U.S. off the gold standard and being responsible for ending the delusory policy of prohibition. By 1936 he was up for reelection and delivered a landslide victory by a margin of 28 million votes to 16 million, however his second term in the Whitehouse hot seat was not to be as comfortable as his first. To pay for the economic turn around in the previous four years Roosevelt had ran up a large deficit and when he tried to curb spending the economy spiralled down into a recession.

Facing down another deep depression of the economy was to be short lived as circumstances in Europe were escalating with the Adolf Hitler inspired Nazi party starting the second world war and pushing the United Kingdom and France to U.S. shores with heavy investment in American goods and commodities which proved stimulating for the economy. The British were the biggest spenders liquidating their entire gold and foreign currency reserves and when that was not enough Roosevelt introduced the "lend lease" programme whereby the Americans would "lend" armaments and supplies to the British and their allies provided they were returned after the war and if they were not returned they would be paid for. This was a shrewd policy for FDR to introduce as he bypassed the "Neutrality Act" legislation that was preventing the U.S. from giving direct aid to Churchill's England. It was also very lucrative as Britain's loan was calculated at $4.3bn and by the time of the final installment in 2006 the United Kingdom had repaid $7.5bn in total.

Roosevelt had a very hands on way of running his government, he bypassed cabinet decision making by agreeing directives with individuals and setting them goals to achieve. He inspired his staff to loyalty and was rewarded with their ingenious creativity achieving targets but this style of government led to accusations of him being a dictator.

Even before Nazi domination on mainland western Europe was complete Churchill had set about on a mission to get the U.S. into the war as early as possible, although Roosevelt's agenda was aligned with the British Prime Minister he had to bide his time until public opinion was also on his side to prevent the United States going to war as a divided nation. Roosevelt's handling of their entry into WW2 was masterful, he waited until the collective will of the nation was behind their participation in the war and once the Japanese attacked Pearl Harbour and Hitler declared war on the U.S. his judgement was proven sound and the United Staes war machine was gearing up to unleash their full force on the axis powers.

FDR walked a tight rope trying to appease his allies and his generals as Winston Churchill and Joseph Stalin both had their own ideas how to fight the war. Churchill got his way with his suggestion that the North African campaign should be where the U.S. forces first joined the European theatre of war and then on into the Italian peninsula to attack the forces of Benito Mussolini. The Soviet forces in the east were paying a heavy price with the blood of their sons in the most savage battles of the war, but they were holding the Germans at bay and with two fronts and the threat of invasion on the French coast Hitler's forces were being stretched, but Stalin never forgot this.

With the war slowly heading in the allies favour Roosevelt concentrated on the post war outcome as he looked to set up a new Europe at the expense of the old imperialistic ways and he envisioned a United Nations set up to secure the peace after the largest ever global conflict this planet has seen. Churchill rallied against Roosevelt and warned him of the grave peril he would bestow upon Europe as he understood the mind set of Joseph Stalin, he knew that after the Red army had won the battle on the eastern front that the Soviets would never give up the land they just liberated. Roosevelt disagreed with Churchill, Stalin smiled and was quoted to say: "Great Britain provided time; the United States provided money and Soviet Russia provided blood", thus the stage was set for the cold war.

In many ways Roosevelt was much like Churchill, they were both exemplary communicators whereas Churchill could inspire a nation with a rousing speech FDR was more subtle as he employed the technique of confiding in a nation with a calm assurance that inspired both belief and confidence in his message. Unlike the British leader Roosevelt would not witness the sweetness of victory as the President was cut down by a cerebral hemorrhage just as the allied forces were at the gates of Berlin and setting their sites on the shores of Japan.

Roosevelt was the first president to die in the circumstances of a rising euphoria relenting to dysphoria with the nation mourning one of the most popular presidents in history as they ruefully contemplated the celebration led by their Commander In Chief only for it to be snatched from the jaws of his victory by his early demise. Yes the war was all but won, but fate played a cruel blow to the leader whose strategy, judgement and timing had turned the course of WW2 in favour of the allies only to allow his successor Harry S. Truman take the worldwide stage presiding over the victorious aftermath.

FDR maintained the family tradition of leadership following in the footsteps of his cousin Theodore Roosevelt by commanding authority through integrity as he grasped the responsibilities of power with a serene strength that inspired a country to keep him as the longest serving president in U.S. history. The electorate showed their confidence in their Commander In Chief by electing him to power on four separate occasions although his fourth term in the Oval office lasted only 83 days his overall legacy has saw history looking positively on his time residing at 1600 Pennsylvania Avenue.

He was known as a fine orator of words as his speeches carried a depth of meaning and sincerity that strived for prosperity and left historians with a wealth of information to sift through which I have used to compile this list of 25 of the best Franklin D Roosevelt quotes.

The British Prime Minister Winston Churchill was impressed to say: "He is the truest friend; he has the farthest vision; he is the greatest man I have ever known"

The WW2 U.S. General Dwight D. Eisenhower gave this positive assessment: "A later call on President Roosevelt and Prime Minister Churchill, a guest at the White House, was no more than an informal chat. It had no military significance, but it was the first time I ever had a personal talk with either of these two men. Tobruk, in the African desert, had just fallen to the Germans and the whole Allied world was thrown into gloom. These two leaders, however, showed no signs of pessimism. It was gratifying to note that they were thinking of attack and victory, not of defense and defeat"

The physicist Albert Einstein paid this tribute: "No matter when this man might have left us, we would have felt that we had suffered an irreplaceable loss... may he have a lasting influence on the hearts and minds of men"

During his succession to President Harry S Truman said in his 1945 address to congress: "So much blood has already been shed for the ideals which we cherish, and for which Franklin Delano Roosevelt lived and died, that we dare not permit even a momentary pause in the hard fight for victory"

The NYT foreign correspondent C.L. Sulzberger spoke of his good judgement: "Stalin wanted a second front right away; Churchill did not, and there was strong feeling at home for punishing the Japanese first. Roosevelt decided that Stalin would get something close to what he wanted in 1942. It was a second front in Africa instead of Europe, but American soldiers were fighting Germans in less than a year after Pearl Harbor, and there was going to be no American straying from the beat-Germany-first strategy. Furthermore, Franklin Roosevelt seemed to know how to judge men. Whatever he may have lacked for the job of Commander in Chief was more than made up for by the group of men he called on to help him"

The German Minister of Armaments and War Production Albert Speer commenting on the delusional attitudes of Adolf Hitler as WW2 approached its climax: "He considered Churchill, as he often stated during the situation conferences, an incompetent, alcoholic demagogue. And he asserted in all seriousness that Roosevelt was not a victim of infantile paralysis but of syphilitic paralysis and was therefore mentally unsound. These opinions, too, were indications, of his flight from reality in the last years of his life"

The historian Arthur M. Schlesinger shared this observation: "Roosevelt had no illusions about revolution. Mussolini and Stalin seemed to him ‘not mere distant relatives’ but ‘blood brothers’."

The actor Orson Welles was not so impressed: "I think the presidential situation now is such that unless there's a hopeless crisis, and you have a semidictatorship like Roosevelt, then we won't see what we call a great president"

The NYT columnist Tom Wicker spoke of him as a world statesman: "The sight of Roosevelt in his black cape, as he reshaped with Churchill and Stalin the future of the world- a sight carried to millions of Americans by newsreels in the movie palaces of the time, and reinforced by radio broadcasts reaching even more millions - Roosevelt as world statesman gave the presidency itself a new aura of power and importance"

The Olympic gold medalist Jesse Owens shared this anecdote: "Hitler didn't snub me; it was our president who snubbed me. The president didn't even send me a telegram"

The author Alistair Cooke gave this assessment: "America had a fling at National Socialism. Roosevelt was for all administration purposes a dictator, but a benevolent one, and the country loved it"

Before FDR was elected President, senator Henry Ashurst made this prediction: "Roosevelt is a man of destiny... He will lead this country out of the Depression and go down in history as one of our greatest Americans" 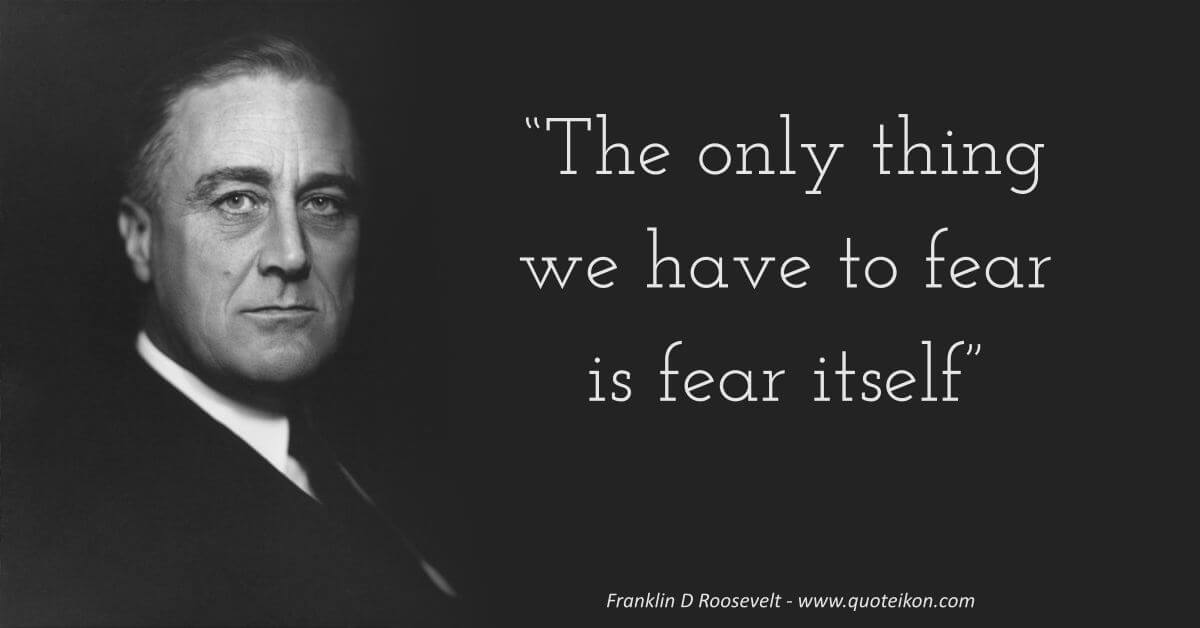