Otto Von Bismarck is highly regarded as one of the most cunning and devious artisans of his profession that Europe has produced. This Prussian statesman through his political manipulations was responsible unifying all the Germanic lands of Europe into what became known as the Second Reich.

His "iron and blood" speeches earned him the moniker The Iron Chancellor much to the misfortune of Denmark, Austria and France who all spilled the blood of its sons facing off with the rising Reich.

Bismarck entered the political arena in 1847 and quickly established a reputation as a royalist with ultra conservative views who single mindedly decided to achieve the unification of all the German states that many rulers had tried unsuccessfully to unify since the foundation of the Holy Roman Empire centuries earlier.

With historic German lands under the control of Denmark Bismarck engineered a dispute and with Austrian support captured the provinces of Schleswig and Holstein. Bismarck then turned his attention to Austria who also laid claim to the previously administered Danish territories, his political manoeuvring provoked Austria into a confrontation which the Prussian leader gladly accepted. The Prussian army had been built up and was a match for the Austrians but Bismarck gained an advantage by bringing Italy into the war as they had their eye on regaining control of Veneto from the Austrians. This divided the Austrian forces giving Bismarck's army a numerical advantage which they used to quickly win the war.

Prussia was gaining German territories but unification was still not attainable because the southern German states were content with the old German confederation. Bismarck adopted Machiavellian tactics to provoke a dispute with France which escalated and was successful in uniting all the German states to rise up and the euphoria of Germanic pride at the victory in the Franco-Prussian War of 1870 was the tipping point that convinced the southern states to join a unified German Empire in 1871.

Bismarck had succeeded where dozens of kings, emperors and rulers had failed and the unification of the German states was complete, the Second Reich had emerged and its powerful shadow loomed large over European countries that still carried expansionist ideals but were unnerved at the might and potential of a unified German Empire.

Bismarck's foreign policy over the next two decades dominated Europe but he was smart enough to avoid major conflict not just for the new found empire but for the whole of Europe, he showed restraint where there were demands for action in the Balkans and his alliances were influential in maintaining peace despite the many threats of confrontation.

The British Prime Minister Benjamin Disraeli was respectfully quoted to say of him: "be careful about that man, he means what he says". Indeed he did, the problem the German Empire faced was there was no one of his equal to follow him as Kaiser Wilhelm led the 2nd Reich into a disastrous first world war and Adolf Hitler's 3rd Reich finished off all the remarkable achievements Bismarck had gained for his beloved mother country.

At home Von Bismarck's legacy was the industrialisation of the German states and the introduction of social welfare for its citizens. He recognised the value in state run public services and nationalised the railroads and before long state run business were generating more revenue than taxes.

Prior to WWI the German Empire was to become the second largest economy in the world and it was all put together by this remarkable Prussian politician and statesman.

When great men talk people usually stand up and listen to their words for they should be given special meaning, after leaving office Bismarck warned many times of the potential for world war but they failed to listen. He used the Napoleonic defeat of Prussia in 1806 as an example when he said: "Jena came twenty years after the death of Frederick the Great; the crash will come twenty years after my departure if things go on like this". His warnings and words of wisdom echoed through the 20th century and etched themselves into history inspiring me to compile this list of 18 of the best Otto Von Bismarck quotes.

The British prime minister William Gladstone called him: "The incarnation of evil"

The Russian Tsar Alexander II was a little peeved when describing the 1878 Congress Of Berlin as "A European coalition against Russia, under Bismarck"

Adolf Hitler, in his book Mein Kampf appreciated Bismarck's contribution to The Reich: "He trusted to the levelling effect of time and to the pressure exercised by the process of evolution, the steady action of which appeared more effective than an attempt to break the resistance which the individual states offered at the moment. By this policy he showed his great ability in the art of statesmanship. And, as a matter of fact, the sovereignty of the Reich has continually increased at the cost of the sovereignty of the individual states"

Friedrich Engels stated in a letter to Karl Marx: "Bismarck, is attempting to organize its own bodyguard proletariat to keep the political activity of the bourgeoise in check, what else is that if not a necessary and quite familiar Bonapartist recipe which pledges the state to nothing more, as far as the workers are concerned, than a few benevolent phrases and at the utmost to a minimum of state assistance for building societies a la Louis Bonaparte"

The German politician Gustav Stresemann was praiseful: "Let us celebrate Bismarck's memory by making the great idea of his life, devotion to the Fatherland, the guiding star of our own lives" 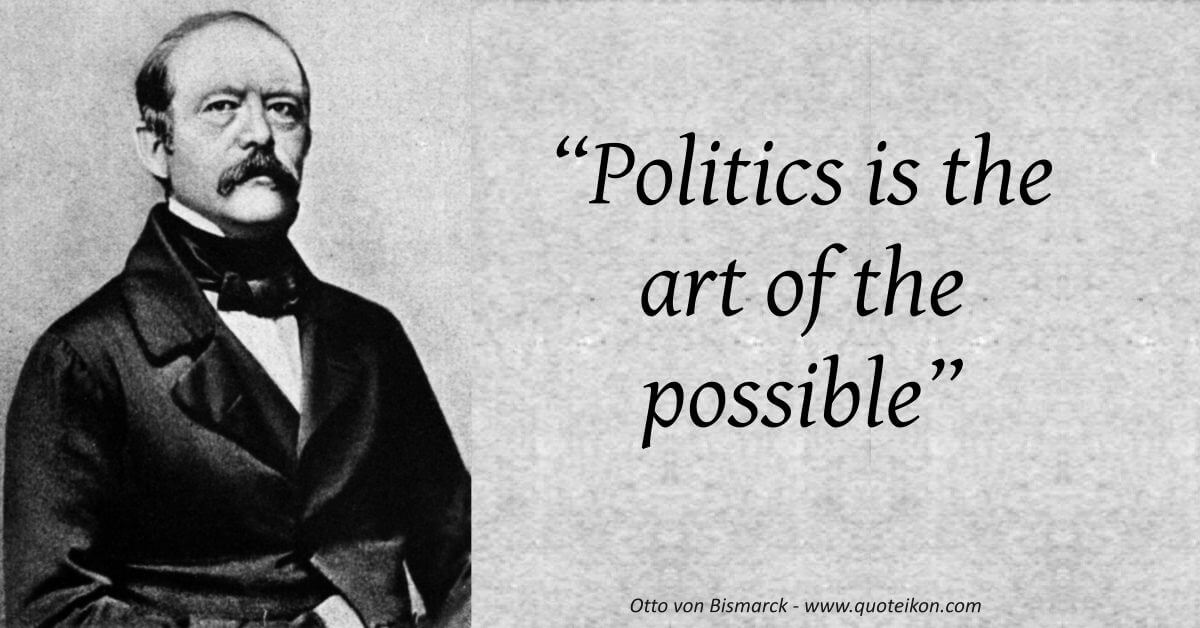