As brutal dictators go Joseph Stalin takes some beating. But despite the 20 million plus victims of his iron fisted rule he was also responsible for transforming Russia from an agricultural society to an industrialised force with the technology to make nuclear bombs.

His industrialisation was just in time to see out the end of WWII as the T-34 tank became the nemesis for Adolf Hitler's German army and with production reaching 1,300 per month by 1943 there was a lot of fast moving fire power rolling off the Soviet production lines.

Such a swift transformation from an agrarian society to an industrialised world power came at a huge cost in human capital as millions were killed as they were forced to work in inhuman conditions and if they refused were arrested and executed.

Stalin did indeed look at the grand scheme of things and he ruthlessly carried out his plan with total disregard for human life and limb.

Before the Bolshevik revolution comrade Vladimir Lenin was impressed by the young Stalin and took him under his wing. Although the heir apparent to Lenin was Leon Trotsky, Stalin managed to outmanoeuvre Trotsky and his allies after Lenins death and it was not long until the The Red Tsar of the Caucasus established himself as supreme leader of the party.

Pre-revolution Stalin got a taste for Siberian exile for various crimes and political misdemeanours and once he was in power he was to turn the Lenin inspired Gulag system into a feared sadistic labour camp in the east that few would ever return west from.

To consolidate his power Trotsky was banished to Kazakhstan in 1928 and deported one year later. However his exile in Mexico still did not satisfy Stalin who sent an assassin in August 1940 to kill the last of his opponents from the former party's leadership. The Trotsky taunt labelling Stalin as the "grave digger of the revolution" had come full circle.

Stalin was pleased. Especially pleased as the murder weapon was an ice-pick that carried symbolic Siberian significance and has since become a stand out murder weapon of the twentieth century.

In fact uncle Joe was so overjoyed with the work of Trotsky's assassin, Ramón Mercader, that he awarded him the Order of Lenin in absentia. Mercader would still be languishing in a Mexican prison by the time it was Stalin's turn to meet his maker.

If the Gulag's were not bad enough Stalin instigated the "Great Purge" between 1936 and 1938 whereby anyone he perceived to be a potential threat was eliminated.

Inevitably this saw large swathes of the hierarchy of the Red Army and Navy executed whilst the Communist party was to be purged from top to bottom. It didn't stop there as millions more were sent to death camps or simply executed as Stalin and his feared secret police chief, Nikolai Yezhov, as head of the NKVD saw fit.

In 1939 Uncle Joe even turned on his NKVD ally Nikolai Yezhov when he had him arrested and in 1940 summarily executed. Yezhov's replacement as Stalin's secret police chief was Lavrentiy Beria who took torture to a new gruesome level even by Russian standards as the Gulags became industrialised.

Beria had a streak of ruthlessness that eclipsed the previous regime in the feared NKVD. The Gulags were digging Uranium and other precious ore out of the ground as fast as Beria was putting bodies six feet under it.

Beria's reputation grew. He was responsible for killing millions. In the eyes of Joseph Stalin, Beria was doing a marvelous job. His industrial Gulags would prove especially useful once those pesky Germans started getting ideas above their station.

Then the inevitable happened. German Panzers started rolling through Russian lands and the Second World War opened up the Eastern Front. It would be the single minded resoluteness of Joseph Stalin that would see the Soviets emerge victorious after one of the most bloody confrontations in the history of warfare.

The Germans made vast territorial gains but came to a shuddering halt in the Battle of Stalingrad in 1942. In the battle for the city named after the Soviet leader, Stalin gave his infamous order number 227: "Ni Shagu Nazad!". It's chilling translation was: "Not One Step Backwards". It became a death or glory cry to avoid being shot for cowardice.

The Red Army were victorious in the battle of Stalingrad. This changed the whole complexion of WW2. The Soviets were now, for the first time, on the front foot. Their T-34 tank inspired the next great victory at the battle of Kursk in 1943. It has been billed as the greatest ever tank battle.

The Soviets may have drove the Germans all the way back to Berlin. But the cost in human life was horrendous as they lost nearly 10 million military personnel. This was a statistic to Stalin who was viewing the big picture, he looked at the road to victory and let the graveyard be damned.

Joseph Stalin became a victim of one of his own purges when in 1952 he had hundreds of eminent doctors arrested and tortured for allegedly plotting against the Soviet leaders. In an ironic twist of fate, Stalin's health took a dramatic turn for the worst in early 1953.

With all the finest medical minds of the Soviet Union languishing in prison, they were unable to administer the most qualified treatment Stalin desperately needed after suffering from a cerebral hemorrhage (stroke) on 1st March 1953.

Just four days later the grim reaper would come calling. There would be no more vodka fuelled suckling pig roasts in the halls of the Kremlin. Uncle Joe had finally breathed his last. His friends in the after world would surely grant him a lively and warm welcome.

From 1924 until his ultimate demise in 1953, it has been estimated that he was responsible for more direct deaths (excluding policy induced famines) than the efforts of the Adolf Hitler, Mao Zedong and Pol Pot regimes all combined.

The only unseemly blots on Uncle Joe's tyrannical resume were the two inconvenient nominations for Nobel Peace Prizes in 1945 and 1948 which recognised his endeavour's to end World War II. Apart from that, as one of the greatest dictators of the twentieth century his reign of repression and terror ticked all the boxes of diabolical dictatorial domination.

The Marxist political activist Isaac Deutscher recognised his remarkable achievements by saying: "He had found Russia working with wooden ploughs and leaving it equipped with atomic piles"

Yugoslavian Communist Milovan Đilas didn't beat about the bush with his description saying: "In him were joined the senselessness of a Caligula with the refinement of a Borgia and the brutality of a Tsar Ivan the Terrible"

The American diplomat W. Averell Harriman praised his statesmanship whilst enduring the adversity of WWII when he said: "Stalin was better informed than Roosevelt, more realistic than Churchill, in some ways the most effective of the war leaders"

The Prime Minister of India Jawaharlal Nehru paid this tribute to the Soviet leader: "The service of Stalin to his people and the peace and in wartime brought him unique glory, and his death wrested from the modern world the personality of exceptional talents and great achievements. The history of Russia and the whole world will bear the imprints of his efforts and achievements"

Sir Alexander Cadogan from the British Foreign Office recalled this tale from the Kremlin in 1942: "There I found Winston and Stalin, and Molotov who had joined them, sitting with a heavily laden board between them: food of all kinds crowned by a sucking pig, and innumerable bottles. What Stalin made me drink seemed pretty savage" 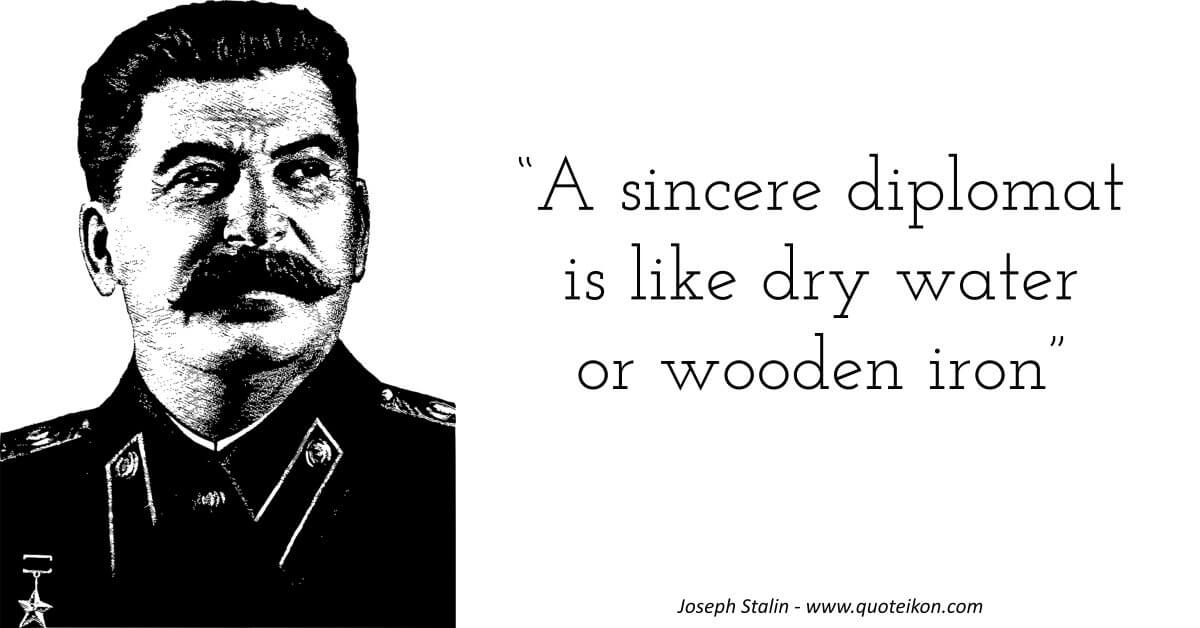