Sigmund Freud was the master of the unconscious mind who by mapping the path to conscious thought process opened up a revolutionary new pseudo science called psychoanalysis that was to change the game of psychiatry forever. He opined optimism and confident thought and put significant weight into the "mommy son" and "daddy daughter" theories outlined in his Oedipal complex concept.

Because of the influence of Freud dreaming has never been the same with psychoanalyst's sprouting up all over the globe with their very individual interpretations of the Sigmund Freud inspired psychoanalysis concept of thought.

It was not all smooth sailing for Freud as in 1884 he took his psychoanalysis a step too far when he wrote a controversial paper called "On Coca" supporting the medicinal use of cocaine. This resulted in an increase of the substances use which led to people suffering some side effects. He quickly decided to disassociate his endorsement of cocaine in public whilst privately still enjoying its delightful effects.

Freud analysed the satisfaction of desire and concluded dreams were wish lists of the subconscious, he delved deeper with his research of the unconscious mind as he depicted a structural model of the psyche comprising the id, ego and super-ego.

For all his psychoanalysis theories he was poor reader of the geopolitical climate of the 1930's, Freud had worked for many years in Austria's capital and felt part of Viennese society. He continually dismissed the rhetoric of the Adolf Hitler Nazi regime as he carried on his work routine apparently oblivious to the seismic political changes in central Europe, he may have felt cocooned in his academic ways of psychotherapy and thought the ramifications Nazism would not affect a man of his standing as he seemed determined to live his life as he saw fit in the country he loved.

When Nazi Germany burned his books in 1933 it gave him food for thought to philosophise on the event but even after the annexation of Austria in 1938 he was determined to stand his ground imperious to the inevitable demise of those of Jewish descent that had felt the anti-semitic wrath in all Nazi dominated territories.

It finally dawned on Freud the mortal danger he had placed his entire family in when his beloved youngest daughter Anna was arrested and questioned by the dreaded Gestapo. At the eleventh hour a determined friend called Ernest Jones who recognised the gravity of the situation visited from London with work visa's for his entire family.

The family started the emigration during April and May 1938 with Sigmund remaining because the patriarch of the family leaving first would have been an alarm bell for the Gestapo to not allow the rest of the family to leave. When his turn came he was denied permission to leave and faced having to settle an overly excessive tax levy despite no longer having access to his bank accounts. Facing a dilemma Freud had a saviour in Princess Marie Bonaparte who provided the Nazi's with the remuneration they requested to allow him to leave.

Freud's last views of Austria were on the 4th June 1938 when he boarded the Orient Express at Vienna Hauptbahnhof station en route to London via Paris. The only ones remaining of his family were his four elder sisters (Dolfi, Mitzi, Rosa, and Pauli) and despite the attempted intervention of the Princess she was unable to save their souls as they left Vienna on a train headed for a date with death as they became a statistic of the millions who perished in Nazi concentration camps.

Always pictured with a cigar in his hand Freud developed mouth cancer in 1923 and despite recommendations to stop smoking after operations to remove growths he persisted in his habit which eventually led to a deterioration in his health that culminated with his cancer becoming inoperable in 1939 and too painful to bear.

Sigmund who was in horrendous pain, turned to a euthanasia agreement he made with his doctor and close friend Max Schur who aided to administer a kind but lethal dose of morphine that initially gave him relief from pain as it placed him in a deep sleep which led to a second dose of morphine 12 hours later that left the already peaceful Freud to become comatose and led to his passing a few hours later.

After cremation his ashes were placed in an ancient Greek urn donated by his patron the Princess Marie Bonaparte and they were solemnly interred in London's Golders Green crematorium until an unlikely event in 2014 when bungling thieves damaged the urn in a desperate attempt to steal his remains.

Quite what the father of psychoanalysis would make of this dastardly true life plot to kidnap his ashes and steal the 2,400 year old urn can only be imagined but an understated line of contemptuous motherly apron clinginess could have been observed stating the suspected thief may have had a problematic upbringing believing his childhood was stolen thus leading to impulsive decision making and a misguided sense of right and wrong. Speculative theories aside, the urn was broken in the bungled burglary and has now been restored and the psychoanalyst's ashes placed back inside.

Sigmund Freud painted a powerful portrait of the human psyche bequeathing a legacy of his psychoanalytic system that dominated psychotherapy in the twentieth century earning him the kudos of one of the greatest psychological theorists of all time whose influence on modern thinking cannot be underestimated. Since his day the sphere of psychology has moved on just like science moved on from Newton and Einstein, but Freud's theories raised the field to new heights which modern day psychologist's have elaborated on to further delve into the science of the mind.

Some years after his demise both his former residences were turned into museums with his Vienna apartment now welcoming visitors at the Berggasse 19 address as the Sigmund Freud Museum while his North London house located at Maresfield Gardens is simply called the The Freud Museum. Quite what he would make of people paying homage in his former homes is anybody's guess but he was always good for a one liner during his lifetime so this is my compilation of 20 of the best Sigmund Freud quotes

Scientifically speaking Albert Einstein recognised the talent but questioned his belief: "He had a sharp vision; no illusions lulled him to sleep except for an often exaggerated faith in his own ideas"

The eminent psychologist Erich Fromm talked of his place in history: "Freud was one of the last representatives of Enlightenment philosophy. He genuinely believed in reason as the one strength man has and which alone could save him from confusion and decay"

The designer Raymond Loewy was mystified by his outlook: "Every time I see a photograph of Freud I wonder how a man who spent his whole life tête-à-tête with sex can look that gloomy"

The philosopher Ayn Rand made this comparison: "Perhaps the last cultural fad one could still argue against was Karl Marx. But Freud - or Rawls? To argue against such persons is to grant them a premise they spend all of their effort disproving: that reason is involved in their theories"

Bertrand Russell found his work refreshing: "When I came to read Freud himself, I was amazed to discover how sensible his writings are and how much milder than what passes for Freudianism among the pseudo-intelligent"

Uttered on his enlightenment moment when he "knew" his psychiatric analysis was becoming mainstream in 1909 when he said at Clark University: "As I stepped onto the platform at Worcester Massachusetts, it seemed like the realisation of some incredible daydream: Psychoanalysis was no longer a product of delusion - it had become a valuable part of reality" 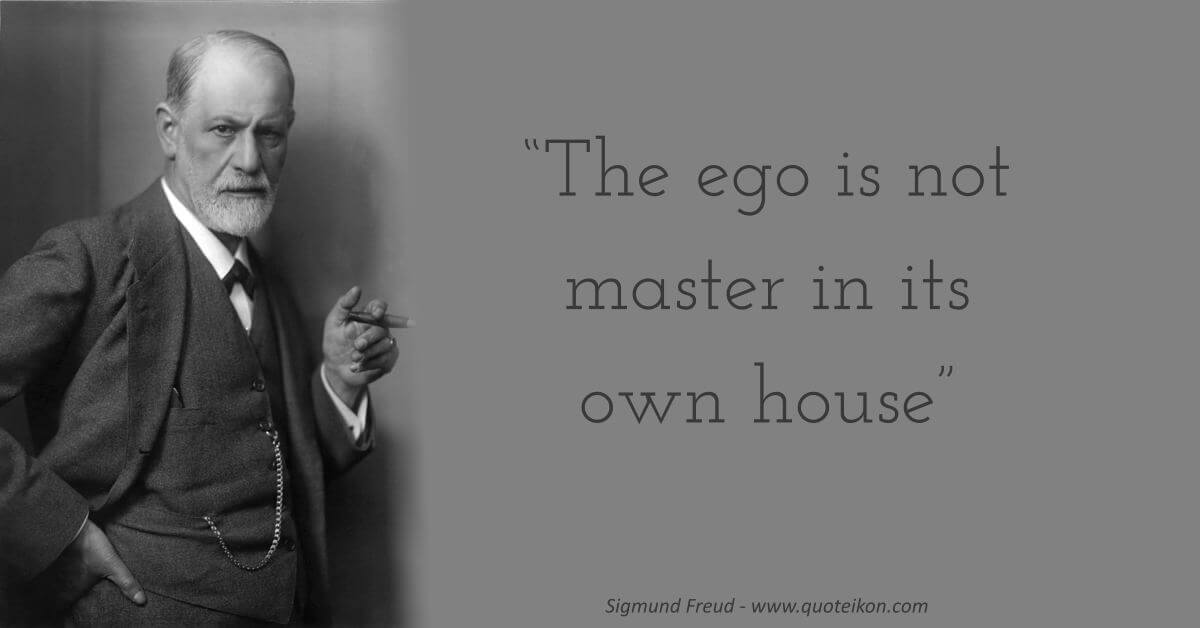