Harry S Truman was the boy who went from the Missouri farm to Whitehouse fame at one of the most significantly important months of the 20th century. It was 12th April 1945 when Franklin D Roosevelt became only the third President since 1900 to pass away in office and WW2 was approaching its final stages as the dawn of the atomic age was about to be foisted onto a world oblivious to the ramifications of weapons of mass destruction.

He came to office completely unaware of wartime and foreign policy at a time when other world leaders were planning out their land claims of the spoils of war. The presidential hot seat had never been hotter and despite being vice president Truman had not been trained to be commander in chief meaning his learning curve was immense and with his love of reading he immersed himself in it totally.

In his dealings with the Russians who were eyeing up much of Europe he was stern and uncompromising, he got on surprisingly well with Joseph Stalin and understood that Uncle Joe had to keep the politburo back in the Kremlin on his side during any give and take negotiation.

Truman was looking to conclude the theatre of war in the far east but Japan was proving a stubborn enemy who were threatening to fight to the death and to help the allied cause he persuaded Stalin to declare war on Japan to ratchet up the pressure.

13 days after he became president the Secretary of War Henry L. Stimson finally explained to him the Manhattan Project and informed him of the power of an atomic bomb, Truman did not consider the full moral and scientific implications as he was focused on a swift resolution to the war in the east and using it as leverage in peace negotiations. He now had the executive power of the United States military machine and he thought long and hard before authorising two atomic bombs to be used against Japan, in the subsequent aftermath of the carnage he took full responsibility for the destruction inflicted on Hiroshima and Nagasaki and its worldwide implications.

Along with the other leaders of the big 4 he attended the Potsdam Conference but although no major agreements were made about post war Europe, Stalin agreed to send his Red Army into Manchuria and once the atomic bomb was dropped on Nagasaki the Japanese position was untenable leading them to surrender on 14th August 1945.

Back in Europe he instigated the Truman Doctrine that outlined American foreign policy to counteract Communist influence and through The Marshall Plan the U.S. gave over $12 billion in aid to stimulate the European economies affected by WW2. In 1949 he was the U.S. signatory on the North Atlantic Treaty Organisation (NATO) and although he failed to save China from the grasp of the Communists he took swift action by sending in U.S. troops to halt the Red threat in the Korean peninsular.

He deservedly earned a second term in office in the 1948 presidential election and his domestic policy successfully traversed the tricky transition from the booming war years to a flourishing peace time economy. He was not a natural orator, but his speeches were well received because his concise coherent message was always firm with genuine conviction. Verbal sparring was something he excelled at so this is my compilation of 26 of the best Harry S Truman quotes

The Soviet diplomat Vyacheslav M. Molotov was taken aback by his bluntness: "I have never been talked to like that in my life"

The political columnist Tom Wicker summed up his legacy with this quote: "Harry Truman dropped the Bomb, and the president became forever the man with his finger on the button, the one American who could destroy an enemy, perhaps the world, with a single order"

General Douglas MacArthur said this about him: "I had been warned about Mr. Truman's quick and violent temper and prejudices, but he radiated nothing but courtesy and good humor during our meeting. He has an engaging personality, a quick and witty tongue"

President Richard Nixon described him thus: "He was a fighter who was at his best when the going was toughest ... Embroiled in controversy during his Presidency, his stature in the eyes of history has risen steadily ever since. He did what had to be done"

The journalist Walter Cronkite was impressed to say: "Truman never shucked the image of a country boy in the big city. But in his self-confident righteousness, he impressed you with the courage of a lion"

The republican Robert Taft was a bit miffed at his reelection: "It defies all common sense to send that roughneck ward politician back to the White House" 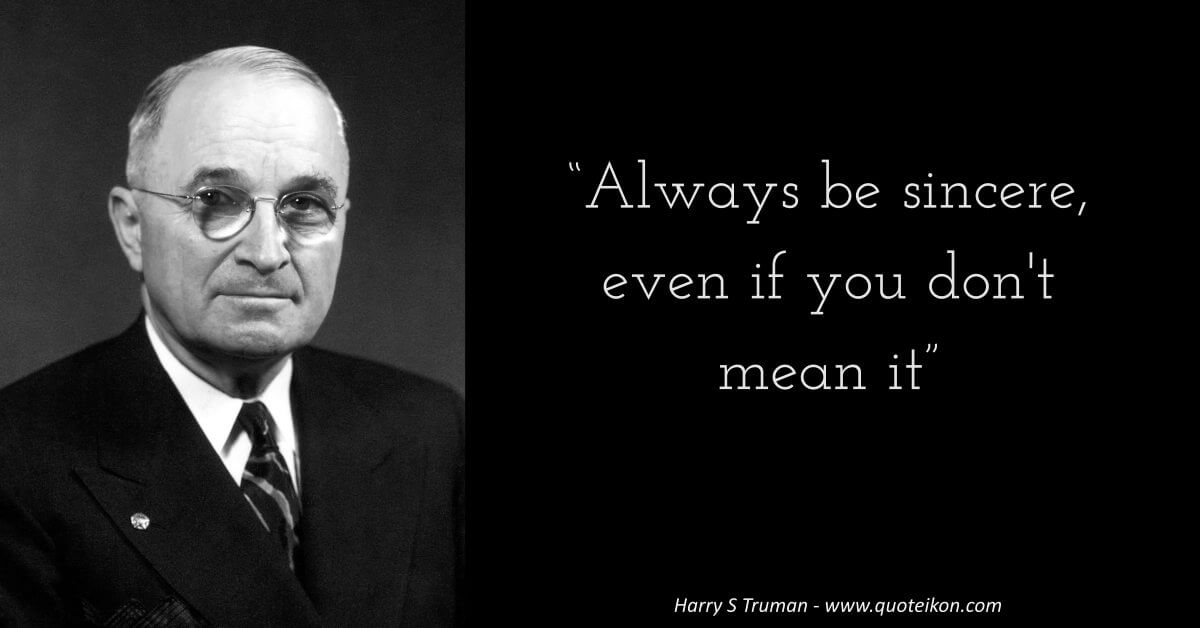