Becoming one of the most famous women in history is no mean feat. Yet the cunning Cleopatra VII was a paradoxical queen that defied historic convention despite everything written about her being created by her enemies including the Romans who finally defeated her putting an end to the 300 year old Ptolemaic dynasty.

The vanquished seldom fare very well in the annals of history. But the story of Cleopatra has endured despite the political reasoning for her portrayal as an enchanting beauty capable of bewitching any man she desired through seduction.

Indeed she did have affairs with two of the most powerful men of her time: Julius Caesar to whom she bore one son and Mark Antony who fathered her three other children.

Whether she loved either is cause for much debate but she did have enough influence over them to get them to do her bidding much to the consternation of the Roman senate and her eventual nemesis Octavian.

Her ascendency to the throne was controversial as Cleopatra was responsible either directly or indirectly for the death of three of her siblings as they all plotted against each other for the right to be the ruler the Ptolemaic kingdom of Egypt.

Once in power, Queen Cleopatra was an exceptionally clever woman who knew how to administer a country, write medical books and command her military.

Throughout history "clever women" have been derided as dangerous but despite her intelligence, irresistible charm, wit and persuasiveness she was doomed from the start as the last powerful leader in the region during a time when the Roman empire was in its ascendancy and she controlled the entire eastern Mediterranean coast.

She was an astute leader in tumultuous times. Cleopatra rolled the dice to the best of her abilities using political cunning, guile and her feminine charm. It makes you think just what could have been if she lived in a different era.

The death of Cleopatra is a hotly debated topic. The defeat of her armies by Octavian left few choices open to her. She did not want to be the prize package of Octavians victories paraded around the Roman Forum. She was fortunate to be given a choice by Octavian and the accepted view of historians is she chose to comply to a coerced suicide.

Her children by Mark Antony were allowed to live but her son by Caesar did not fare so well as Octavian had him killed because his lineage made him eligible to be an emperor.

Another mystery is the whereabouts of the tomb of Antony and Cleopatra. It has never been definitely identified although the Egyptians antiquities board believe its most likeliest location to be the temple of Osiris at Taposiris Magna which is located southwest of Alexandria.

Of her charms the Roman poet Juvenal was quoted as saying of Cleopatra: "What woman will not follow when an Empress leads the way?". She was a polyglot who spoke nine languages and she was the first Ptolemaic leader to learn Egyptian after all her predecessors preferred to speak their native Macedonian Koine Greek.

The fascination about the life of Cleopatra places her in a unique position of all the famous women of antiquity because she understood the aphrodisiacal effect of power in politics and used her feminine guile to become the epitome of the femme fatale who romanced her way through the corridors of Roman power.

She set the tone for powerful and intelligent females to use their womanly charms as a weapon to achieve their minds desires and in doing so her legacy is a warning to powerful men to be wary of the femme fatale and an inspiration to ambitious women confirming that it is possible to achieve their goals.

When great leaders speak their people listen as their words take on real meaning, she was good for a one liner also so this is my compilation of 10 of the best Cleopatra VII quotes

The Greek biographer Plutarch said of Cleopatra "There was sweetness also in the tones of her voice; and her tongue, like an instrument of many strings, she could readily turn to whatever language she pleased"

Plutarch went on to say: "For her beauty, as we are told, was in itself not altogether incomparable, nor such as to strike those who saw her; but converse with her had an irresistible charm, and her presence, combined with the persuasiveness of her discourse and the character which was somehow diffused about her behaviour towards others, had something stimulating about it"

The Bard of Stratford William Shakespeare made this sweet ode for Cleopatra: "Age cannot wither her, nor custom stale. Her infinite variety" 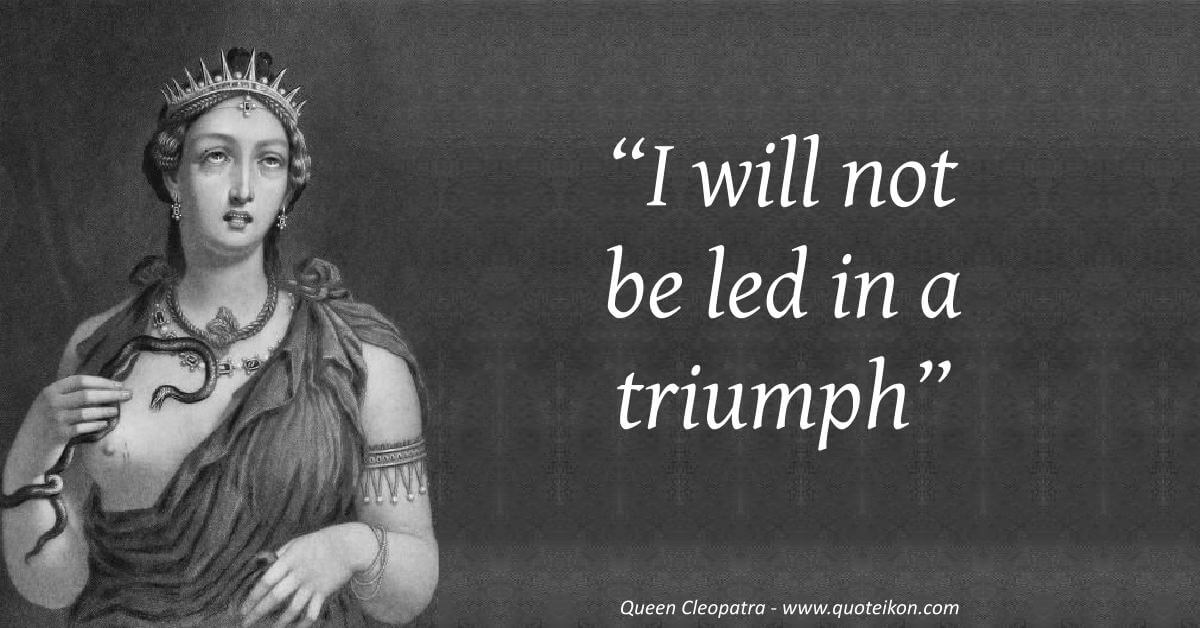