Imagine the scene, the final minutes, the racing pulse, the intensity of emotion, the fear, the dread, the sorrow. The walk of death for the condemned man is a harrowing experience. Facing the squad, masked and tethered waiting for the bullet. But you hear a speech, "long live the Tsar" followed by the emperor's clemency. This was the pivotal moment that would forever shape the pen of Fyodor Dostoevsky.

Mock executions were a treasured terror tactic of Tsardom. Never mind the psychological damage inflicted, lessons had to be taught with instilled fear coupled with abstract gratitude. For Fyodor his sentence was commuted to four years hard labour plus military service in the frozen wilds of the Siberian steppe.

Dostoevsky was condemned for activities deemed treasonous to the monarchy. Earlier, he joined a subversive group called the Petrashevsky Circle and became an outspoken opponent to the institution of serfdom. The secret police of the Tsar had infiltrated the group and on 23rd April 1849 the collaborators were all rounded up and imprisoned in the Peter and Paul Fortress in St Petersburg.

In Dostoevsky's day, the emperor of Russia was Nicholas I. He looked on in shock at the political upheaval of the 1848 uprisings against monarchies across Europe. He became quite paranoid about revolutions against his own imperial rule. The Tsar determined to quell dissident behaviour. He cracked down on those with a heretical leaning and he delighted in his penchant for mock executions prior to a last minute reprieve. Siberia was always the ultimate destination as it was still a wilderness hungry for fresh blood to exploit its resources.

Fyodor was, rather harshly, deemed a dangerous prisoner. He spent his four years of hard labour with hands and feet shackled in chains. Once his sentence was complete his ordeal was not over. He still had to face 6 years in the military stationed "beyond the rock", which was a cryptic reference to the Siberian lands east of the Ural mountains.

Exile to Siberia was first initiated under the rule of Peter The Great. Siberia had been conquered and Russia determined to capitalise on its vast resources. Slave labour would be needed to work the newly opened mines and other industries. Yes, there were dissident Poles and Nordic POW who were criminalised and sent east. But this was never enough. There seemed little point in executing even the most depraved Russian criminals when their labour could be utilised under the Siberian sun.

Afterall, once in the frozen east, where could they escape to? Laws were also relaxed to allow landowners to send lazy or unruly serfs to Siberia, no explanation or court case required. Back in the day, the journey to Siberia was arduous to say the least. Dostoevsky's prison escort journeyed for 14 days by sledge to reach Tobolsk. His labour camp in Omsk was a further 11 days travel.

Dostoevsky was imprisoned with few noblemen or peers of equal educational esteem. His incarcerated inmates consisted mostly of murderers, muggers, mercenaries and malefactors. If the bitter cold was not enough the prisoners were "packed like herrings in a barrel" as Fyodor so succinctly sketched it and went on to describe his Siberian slammer as a sewer of stench that served only to exacerbate the sallow stigmatism of his subjugation.

Surviving was the name of the game. But, Dostoevsky's curiosity compelled him to risk life over limb and ask the hard questions of his fellow prisoners: What went through their minds in the seconds before they murdered or maimed? What drove them to commit their crimes? Did they show remorse to their victims? Fyodor was shocked to hear atrocities could be carried out so flippantly by his fellow man.

Vacuous violence and casual cruelty were served as routinely as the rations of rye bread and cabbage soup. Stories that sent shivers down the spine were shared with nonchalant ease as unwary layers of benevolence were shredded in a metamorphosis of this writers mind.

It was not just evil that Fyodor encountered. He experienced moments of unexpected kindness that gave him hope for mankind and gallows humour that relieved the tension of the imprisoned mind.

They say that exile to Siberia changes you, if it doesn't kill you first. Dostoevsky may have survived his Siberian exile but his time beyond the rock would live on forever through a pen touched by torment and haunted by hope.

He was a psychoanalytic novelist well before his time. Can you imagine the encyclopaedic books that Sigmund Freud could have written if he could have been a fly on the wall to the conversations between Dostoevsky and his fellow inmates?

Back in western Russia, the pen of Dostoevsky flowed incessantly to give rise to a succession of successful novels. He ran with the theme of the inevitability of death through The Idiot whereby he drew on his personal experience of a mock execution to deliver an emotional roller coaster of chaotic gallows humour combined with complex plot and fantastical inventiveness.

The traumatic effect of his mock execution was merely an appetiser for his entrée experience of Crime and Punishment inspired by Siberia and polished off by a dessert of drama dressed by Dostoevsky as The Brothers Karamazov, which is arguably his chef-d’œuvre.

For some, reading Dostoevsky can be a stiff drink to swallow. The intensity of his message requires more than a chilled vodka chaser. Dostoevsky delved deeper into the psychological necessity of freedom to reveal it as an insufferable burden open to the ideological interference of rascals, rogues and political scoundrels.

Through his own suffering, Dostoevsky recognised that adversity is critical to test human fortitude and the further you delve into the abyss of psychological pain the more enlightened you become. His pen, honed in the Siberian steppe, solidified his position in a long list of distinguished Russian writers and intellectuals whose dissident beliefs rewarded them a haunting experience of wretched misery that opened an inspiration in their mind from where dark literary laurels would flow.

He appreciated the gift of life and saw how the majority failed to value all but their own necks. He was also at pains to point out how little man knows of himself and how far he can go in the face of adversity. In essence, Fyodor Dostoevsky found a truth in torment that most men, through choice or not, ensure they never see.

The philosopher, Friedrich Nietzsche, was impressed to say: "The testimony of Dostoevsky is relevant to this problem — Dostoevsky, the only psychologist, incidentally, from whom I had something to learn; he ranks among the most beautiful strokes of fortune in my life, even more than my discovery of Stendhal"

The author Virginia Woolf shared this literary comparison: "Out of Shakespeare there is no more exciting reading"

The physicist Albert Einstein enthused: "He gives me more than any scientist"

The writer James Joyce was inspired by his writing: "he is the man more than any other who has created modern prose, and intensified it to its present-day pitch. It was his explosive power which shattered the Victorian novel with its simpering maidens and ordered commonplaces; books which were without imagination or violence"

Ernest Hemingway was moved to say: "there were things believable and not to be believed, but some so true that they changed you as you read them; frailty and madness, wickedness and saintliness, and the insanity of gambling were there to know"

The father of modern psychology, Sigmund Freud, gave this appraisal: "Four facets may be distinguished in the rich personality of Dostoevsky: the creative artist, the neurotic, the moralist and the sinner. How is one to find one's way in this bewildering complexity?"

The acclaimed writer James Baldwin shared this truism: "You think your pain and your heartbreak are unprecedented in the history of the world, but then you read. It was Dostoevsky and Dickens who taught me that the things that tormented me most were the very things that connected me with all the people who were alive, or who ever had been alive"

His fellow student, Konstantin Trutovsky talked of their military education: "There was no student in the entire institution with less of a military bearing than F.M. Dostoevsky. He moved clumsily and jerkily; his uniform hung awkwardly on him; and his knapsack, shako and rifle all looked like some sort of fetter he had been forced to wear for a time and which lay heavily on him"

His one time landlord, Dr. Rizenkampf, shared this character assessment: "He often looked at everything through dark glasses, became vexed, forgot good manners, and sometimes was carried away to the point of abusiveness and loss of self-awareness"

The Norwegian writer Knut Hamsun thought his human analysis was beyond compare: "no one has analyzed the complicated human structure as Dostoyevsky. His psychologic sense is overwhelming and visionary"

His second wife, Anna Grigoryevna Snitkina, spoke of an intriguing attractiveness: "The strangeness of his eyes gave Dostoyevsky some mysterious appearance"

The critic Edwin Muir shared this observation: "Regarding the 'oddness' of Dostoevsky's characters, it has been pointed out that they perhaps only seem 'pathological', whereas in reality they are 'only visualized more clearly than any figures in imaginative literature'."

The eminent Professor of Philosophy James P. Scanlan voiced this opinion: "That Dostoevsky should make egoism the subject of a major work in 1864 comes as no surprise to anyone familiar with tendencies in Russian literature at the time or with Dostoevsky's own earlier career, which reflected a continuing interest in the topic"

The critic George Steiner made this interesting comparison: "Even beyond their deaths, the two novelists stand in contrariety. Tolstoy, the foremost heir to the traditions of the epic; Dostoevsky, one of the major dramatic tempers after Shakespeare; Tolstoy, the mind intoxicated with reason and fact; Dostoevsky, the condemner of rationalism, the great lover of paradox"

The poet T.S. Eliot described The Brothers Karamazov thus: "the first and finest theological drama of its century, [and] the equal to anything Russian literature has produced"

The Russian composer Tchaikovsky, in a letter to his brother Modest in 1881, was captivated to say: "I am reading The Karamazovs and am yearning to finish it soon. [Dostoevsky] is a writer of genius, but an antipathetic one. The more I read, the more he weighs down on me"

The author Julie Sternberg uncovered this chilling quote: "One of the convicts who was present when Dostoyevsky was sentenced to hard labor in Siberia—instead of being tied to a post, blindfolded, and shot by a firing squad—one of those fellow convicts, hearing the news said, "Better to be shot than sent to Siberia"."

The author Chris Hedges shared this succinct reflection: "Dostoevsky did not fear evil. He feared a society that no longer had the moral fortitude to confront evil" 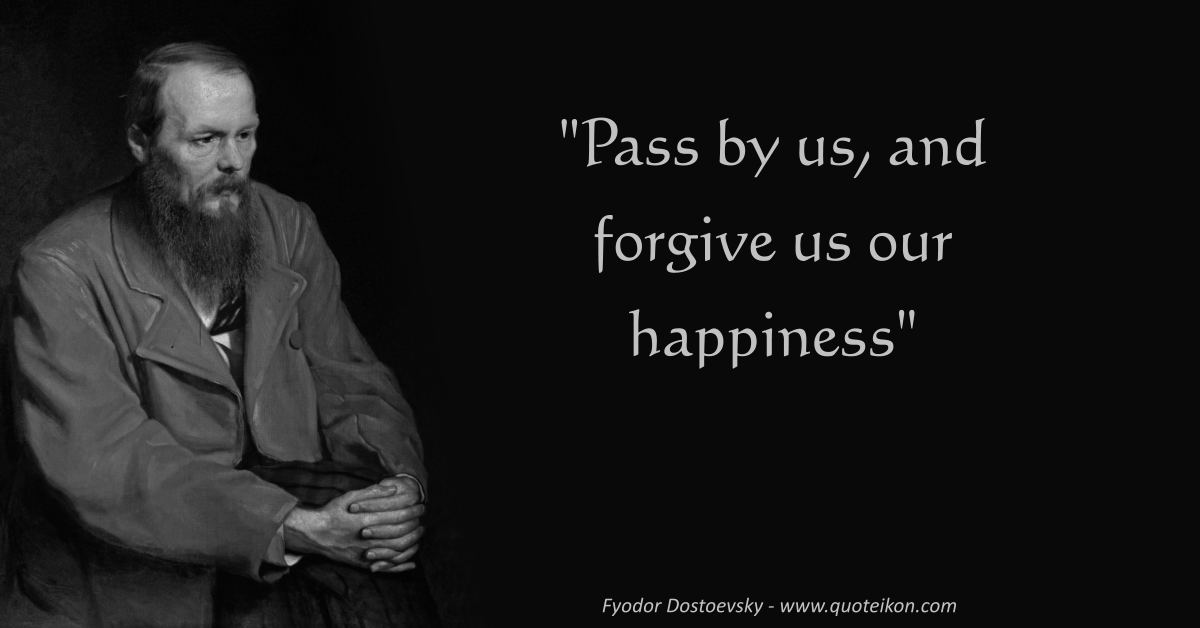