From the hustings of soap box speeches in exile, this man rose up to lead a revolution that surprised the world but enraptured his people. He was an optimist, an opportunist and eventually a Communist. But above all, he placed the welfare of the people first and foremost in his island nation home of Cuba. His name is Fidel Castro, the rebel liberator who dared to dream and won.

Fidel Castro was the revolutionary leader who dared to defy the most powerful nation in the history of the world. It was 1959 and his guerilla army just toppled the U.S. backed military dictator President Fulgencio Batista. The angst of the Pentagon politico's was there for all to see and they would spend the next half century plotting and scheming to take Castro down by foul means or fair.

He was arguably, the biggest political thorn in the ass in the history of The Whitehouse. Despite the animosity and failed assassination attempts Fidel Castro still endured through 10 Presidents. He became the worlds longest serving political leader of his time before he stepped down from the Havana hot seat of power in 2008.

Castro was a brilliant orator and a master of Machiavellian politics who cast himself as David to the Goliath across the Florida Straits. The irony of this situation was political satire at its best as Fidel Castro mocked and outmanoeuvred the Americans at every turn. He was also a revolutionary who evolved by making smart choices at critical moments in time.

Despite the influence of his comrade Che Guevara, he was never a Communist until the Americans forced his hand. It was the Americans who made Cuba a pawn in the Cold War. The U.S. economic embargo was one thing, but when combined with The Bay Of Pigs attempted coup all it did was push Castro further towards the Soviets.

Castro became a willing pawn who packed a political punch that the heavyweights in Washington kept walking into. The Bay Of Pigs Fiasco consolidated his power base at home and gave him political ammunition he could exploit for years to come, and worse still, it paved the road to the Cuban Missile Crisis in October 1962.

The Cuban Missile Crisis was the most intense 13 days in the history of the world. Two atomic juggernauts prepared for nuclear annihilation in a dispute centred on an island less than 100 miles from the American coast. Castro had actively encouraged the Soviets to place their missiles within striking distance of the U.S. mainland. Moreover he forcefully requested they use them should the Americans ever decide on a full military invasion of Cuba.

The world watched with bated breath as Nikita Khrushchev sent his Soviet ships to Cuba to complete the missile installation that would have led to armageddon. It was clear President Kennedy would not back down as he sent his forces into the Atlantic Ocean fully prepared for battle. Luckily at the last minute Khrushchev backed down and the ships returned to their Soviet naval bases.

The world sighed in collective relief but Castro was the real winner here. His brinksmanship placed the big cold war enemies in the cross-hairs of each others weaponry. As one of the conditions for the Soviets to back down the Americans conceded to agree to never invade Cuba.

Whilst this turned the Cuban issue from an American headache into a persistent migraine, it gave Castro a carte blanche hand to do as he pleased politically.

Although Castro won the revolution and survived the aftermath, it was Soviet aid that kept the Cuban wheels turning. It was this aid that influenced Fidel to introduce his Karl Marx and Vladimir Lenin inspired speeches that kept the Kremlin happy and the Rubles flowing.

The American obsession with Cuba, and Castro in particular, would torment every subsequent U.S. President right up to Barack Obama. Fidel Castro often amused himself about this situation as he was once quoted as saying: "For such a small country as Cuba to have such a gigantic country as the United States live so obsessed with this island, it is an honour for us".

The CIA were equally as miffed. Every dastardly plot to assassinate the Cuban leader was doomed to fail. They tried everything from poisoned cigars to poisoned pens and even tubercle bacilli-infected scuba-diving suits. Then they went back to cigars again, this time of the exploding variety. Fidel Castro got a kick out of mocking the Americans as he used their failures to politically taunt them with cutting quips such as: "If surviving assassination attempts were an Olympic event, I would win the gold medal".

The Lenin inspired Soviet Union lasted until 1991 and by the end of the twentieth century Fidel Castro was the last real Communist standing. The world is always in constant change and it had moved on from his stagnant rhetoric that had served him so purposefully in the preceding decades.

There were many positives from his years in power. Castro made dramatic progress in literacy, higher education, university enrollment and healthcare. Infant mortality decreased and life expectancy increased as improvements in the quality of life were felt across Cuba.

His legacy as the father of the Cuban revolution will forever stay in the hearts of Cubans for generations to come. The image of the bearded comandante riding a tank triumphantly through the Havana streets lined by its euphoric people in 1959 has immortalised Fidel Castro as the man who stood up to an American backed regime and won. He was always proud of his achievements and had faith that history would judge him kindly as he once stated: "Judgment is spoken by the eternal court of history".

Throughout his time in power he was always a fine orator who was never afraid to speak his mind and share his words of wisdom, of which there were many. His detractors may not miss him but the pages of history will be there to remind the world of the man that dared to dream and won. His memorable words remain and inspired me to compile this list of 20 of the best Fidel Castro quotes.

His fellow revolutionary Che Guevara gave this assessment: "Fidel is a man of tremendous personal magnetism, destined to assume the role of leader in any movement in which he takes part. He has all the characteristics typical of a great leader: audacity, force, the desire to keep his ear attuned to the will of the people. But he has other important qualities: the capacity to absorb knowledge and experience, a grasp of the overall picture in a given situation, boundless faith in the future"

Nikita Khrushchev on the Castro delegation to the New York UN summit in 1960 not being allowed to stay at their pre-booked hotel and moved to a Harlem hotel: "When we learned about this outrage which had been committed against the Cuban delegation, we were indignant. We decided that I should go to the hotel in Harlem and shake Castro’s hand as a gesture of sympathy and respect. Not that Castro needed anyone to feel sorry for him. He is a man of strong will. He understood perfectly that he was being harassed as part of the reaction of American monopolies to the policies which his government had been conducting in Cuba since he seized power"

Vladimir Putin paid him this tribute: "This strong and wise man always looked with confidence to the future. He embodied high ideals of a politician, citizen and patriot, was sincerely convinced of the rightness of the cause, to which he gave his whole life"

The actor Errol Flynn was inspired to say: "This man more than superseded my every expectation I had...if you live with a man under duress (this is before the victory…) he is I think…he will rank in history with some of the greats"

India's first prime minister Jawaharlal Nehru spoke these genuine words: "I wanted to meet you for many reasons, above all, because you are a very brave man"

President Dwight D. Eisenhower spoke of perceived dangers: "In distinction to other neutralist leaders, Castro fully incorporates the Communists in his regime, carries out a precipitate revolution against the existing social order, and is far more internationalist in his pretensions to spread his revolution to surrounding countries than the usual type of nationalist whom the Communists court"

President John F. Kennedy said about the disastrous Bay Of Pigs Invasion: "I have had two full days of hell – I haven’t slept – this has been the most excruciating period of my life. I doubt my presidency could survive another catastrophe like that"

The British politician George Galloway described him thus: "He liberated Cuba played a decisive role in destroying Apartheid in South Africa Sought to liberate Latin America from fascism. He stood with the fighters in Vietnam and Congo. He turned Cuba from a casino and bordello into an icon to all"

The Chinese leader Xi Jinping was welcoming with his words: "You are deeply admired by the Cuban people and have also won the respect of the Chinese people. We will never forget the significant contributions you have made to the bilateral relationship"

The former U.S. ambassador to Cuba Wayne Smith who knew him well: "He was reasonable, not domineering, as one might expect. He would listen to you"

Wayne Smith went on to say: "His objective was to bring about a hemispheric revolution - not a communist revolution, but a progressive one. Certainly, that meant reducing the influence of big business and likewise the influence of the U.S."

The author Ann Louise Bardach summed him up thus: "Castro has the discipline of a warrior, the intellect of a chess master, the obsessive mania of a paranoiac and the willfulness of an infant" 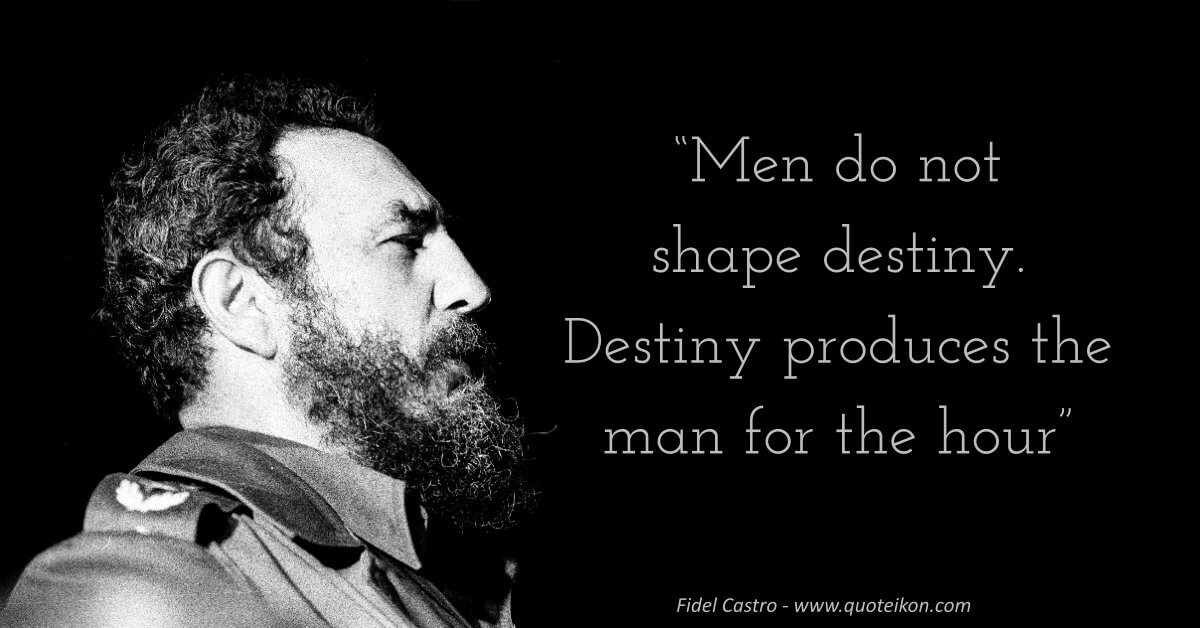