Errol Flynn didn't know it but his Papua New Guinea adventures living on his wits while prospecting for gold or risking his neck sailing a schooner 100's of miles further than was safe to do so on the Sepik River was where he honed his skills for Hollywood.

The bars and bordello's of Rabaul in Papua New Guinea were his playground where he encountered every type of misfit, thief and chancer born under the southern hemisphere. He also had to skip town to avoid the unwelcome rumours of him murdering one of the natives and he took a case of malaria with him that would haunt him for the rest of his life.

Flynn was a man born for greatness and when Warner Brothers risked casting him, as an unknown actor, as the lead in the 1935 movie Captain Blood it proved a calculated success. His on screen chemistry with his Captain Blood co-star Olivia de Havilland was plain to see and they went on to make a further 8 movies together during which Errol became one of the biggest Hollywood stars of the late 1930's.

His next big movie was The Adventures of Robin Hood in 1938 which cemented his legend as the swashbuckling adventurer of the Golden Era of Hollywood. Off screen was more of an amorous adventure as his womanising ways began to make more headlines than his leading roles.

A highly publicised 1942 rape trial threatened to derail Flynn's acting career but he was eventually acquitted on all charges. Never one to miss out on an affair of the heart, Errol used the break times during his rape trial to successfully meet, woo and eventually marry his second wife Nora Eddington who worked at the court room cafe.

Errol Flynn was an insatiable lover and even Sally Stanford who was the madam of the infamous upmarket San Francisco bordello on Pine Street was staggered by his libido as she was quoted as saying: "He was the only customer I ever had who tested all of the talent, including both shifts, twice".

Errol's legendary womanising inspired the phrase "In Like Flynn" for the ease in which he could seduce a woman.

His hard drinking and hard living ways all came with a price, he had done more in his 50 years on this planet than most could do in several lifetimes and the grim reaper came for him as his body gave up the ghost whilst he was selling his yacht in Vancouver. He was quick with a quip too, so this is my compilation of 15 of the best Errol Flynn quotes

Olivia de Havilland spoke fondly of what could have been: "Yes, we did fall in love and I believe that this is evident in the screen chemistry between us. But his circumstances at the time prevented the relationship going further. I have not talked about it a great deal but the relationship was not consummated. Chemistry was there though. It was there"

The musician Ronnie Wood who visited Flynns' old Hollywood house was surprised to find: "Errol had two-way mirrors ... speaker systems in the ladies' room. Not for security. Just that he was an A-1 voyeur"

Actress Hedy Lamarr spoke of his house also: "Many of the bathrooms have peepholes or ceilings with squares of opaque glass through which you can't see out but someone can see in"

The actor David Niven talked rather tongue in cheek of his old friend: "You can rely on Errol Flynn - he'll always let you down" 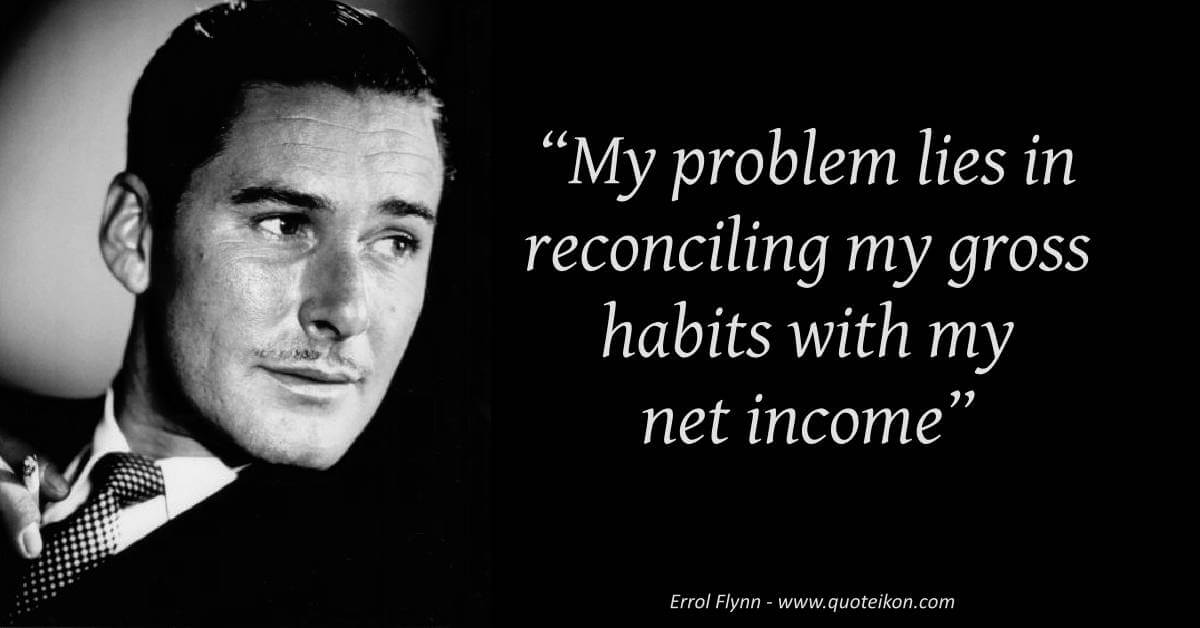