Dwight D. Eisenhower was the military man and reluctant president who successfully masterminded and implemented the most important military manoeuvre in world history. Operation Overlord was the name behind the 1944 D-day landings on the Normandy beaches and the most crucial phase of liberating Europe from Adolf Hitler's ruthless control of Nazi Germany.

It was a plan that was fraught with danger as the Germans had spent months fortifying their positions and with an assembled army of 2.8 million troops from 12 nations at Eisenhower's disposal the stakes of war had never been higher. On 6th June the largest seaborne military operation in the history of warfare began and although the fighting was fierce the allies managed to breach the Nazi defences and forced the Germans into a hasty retreat.

Within 2 months Paris had fallen back into the hands of the allies and the French commander Charles de Gaulle joined Eisenhower at the Hotel de Ville as they welcomed the liberating troops into the city. With the German forces split fighting on two fronts the Russians began to make headway in the east while the allies quickly liberated Belgium and Holland in the west, the next target was clear as Ike's troops crossed the border into Germany the race was on to quickly defeat the remains of the German army and remove the Nazis from power.

Operation Overlord was a massive risk but ultimately successful despite the loss of many brave soldiers on the beaches of northern France and on the battlefields of mainland Europe, and it cemented Ike's position as a brilliant military strategist. After the American's entered the war against Germany the choice of Eisenhower as Supreme Allied Commander in Europe was interesting as he was the protégé of George Marshall who was expected to take the role.

Eisenhower's organisational and strategic military planning were considered essential ingredients for the post of Supreme Allied Commander but there was a lot more required for the role as the commander also had to deal with integrating the imposing wills of Winston Churchill, Joseph Stalin and Charles de Gaulle with the allies equally strong minded and adept generals Bernard L. Montgomery and George S. Patton. He was receiving advice from all quarters and Eisenhower was equipped with a conciliatory skill set to deal with all the conflicting demands of the angst allied leaders and find the common ground that would achieve the ultimate goal of victory in Europe.

As WW2 was coming to an end he personally visited the Nazi concentration camps and was so appalled at what he witnessed that he ordered special staff and photographers to conduct a detailed search and to document all the gory details and horrors of the holocaust carried out in these death camps. Post WW2 Ike's reputation and popularity was so high that speculation was mounting that he would run for president and as he had never openly supported either U.S. political party both the Republicans and the Democrats were openly courting him to represent them as they both knew that his leadership was a ticket to the Whitehouse in the next general election.

The only problem was Ike was a military man and he never harboured any political ambition. In 1948 the Democrat President Harry S. Truman enquired if he would be interested in running for office and Eisenhower's quoted response was negative as he said: "Mr. President, I don't know who will be your opponent for the Presidency, but it will not be I". The Republicans were more tenacious in their approach and Ike realising how serious the Cold War crisis was becoming did not want to see an antagonistic conservative like Robert A. Taft sitting in the Whitehouse so he put himself forward to represent the Republicans.

He successfully won the 1952 presidential election and remained in office for 2 terms until 1961. Despite the growing tensions in world politics his presidency is generally viewed as successful and although he was never the most eloquent orator to grace The Whitehouse he was still good for a quick quip, so this is my compilation of 23 of the best Dwight D. Eisenhower quotes

The academic John Lewis Gaddis pointed out that: "Historians long ago abandoned the view that Eisenhower's was a failed presidency … Not until Reagan would another president leave office with so strong a sense of having accomplished what he set out to do"

The NYT political correspondent Tom Wicker explained his media impact: "Eisenhower was the first television president, visible virtually every night on the home screen. After Eisenhower, any president was to be the single most familiar figure to every American, far more so than anyone's mayor or senator or governor"

The Shah of Iran Mohammad Reza Pahlavi remembered him fondly: "No doubt history will say that Eisenhower was a soldier. For my part, I will remember, above all, his goodness. He was a fundamentally good man who knew how to be loved by the Americans. I was fond of Ike"

The eminent historian David M. Oshinsky described him thus: "Eisenhower was known as a harmonizer, a man who could get diverse factions to work toward a common goal... Leadership, he explained, meant patience and conciliation, not "hitting people over the head"

The author Tom Wicker made this comparison: "Dwight Eisenhower, with Churchill and Stalin removed from the world scene, became clearly its most imposing figure - a distinction only Roosevelt and Woodrow Wilson (briefly in 1919) had achieved"

General George S. Patton got straight to the point when said to him: "I have the utmost confidence that through your efforts we will eventually beat the hell out of those bastards - You name them; I'll shoot them!" To which Eisenhower replied: "I don't have the slightest trouble naming the hellions I'd like to have you shoot; my problem is to figure out some way of getting you to the place you can do it" 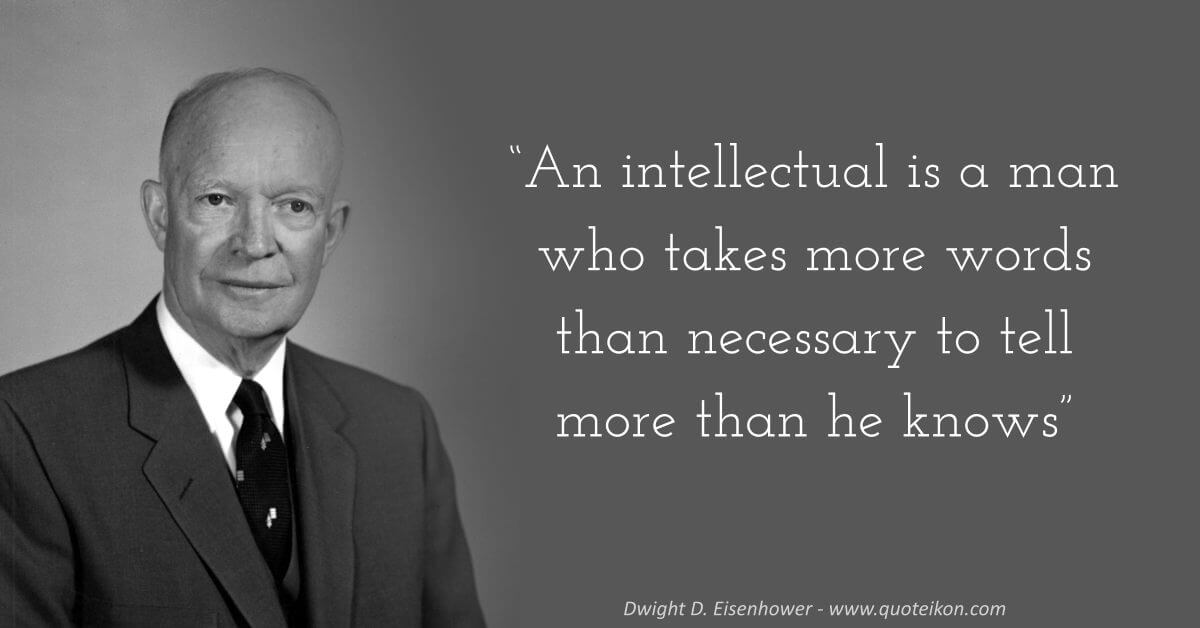