Nikita Khrushchev was born into peasant poverty under a tsarist Russia in a small town close by to the Ukrainian border called Kalinovka. He knew the hardship of child labour as he experienced both farm work and mining whilst he was (pardon the pun) still a minor. All through his rise up the ranks of the Communist party he never lost sight of his past and his love for Mother Russia ensured he would always hold dear to his heart the history of his great nation.

Without any noteworthy childhood education he used his natural ability as a vociferous debater and sense of drama to rise up through the ranks of the Communist party. In an era of Joseph Stalin paranoia inspired purges there were many opportunities for advancement through the party machine and by 1934 he was aiding and abetting the purges in the greater Moscow area by personally approving the arrest warrants for thousands of military personnel and party officials, many of whom were personal friends.

WW2 saw Stalin appoint him as a political commissar with a view to ensure the Red Army's generals carried out their orders from Moscow as instructed, Khrushchev later reflected upon this time as missed opportunities because of the senseless instruction that no soldier can retreat causing catastrophic losses that were totally unnecessary. He was posted to Stalingrad and witnessed the most brutal confrontation of WW2 that was also a bitter turning point for the Adolf Hitler Nazi war machine.

After the curtain closed on the world war a new "cold war" was about to begin and Khrushchev was now in the upper echelons of the Communist party. 1953 saw the death of Uncle Joe and the start of a major power struggle that within 4 years would see the execution of Stalin's chief of police Lavrentiy Beria and Khrushchev taking control as head of the Communist party and leader of the Soviet Union.

His hold on the reins of power were a tense time for the world as he presided over building the Berlin Wall and the Cuban missile crisis which, at the time, gave him a bad press in the western media. He thought President Kennedy was a weak leader because of the Bay Of Pigs fiasco and his brinksmanship took the world to within a whisker of nuclear armageddon until an agreement was thrashed out between both super powers.

At the time Nikita Khrushchev was quoted as saying: "Let's not try to bury one another. We are the two most powerful nations and the consequences of a play on words can be too sad for our peoples". He opened the eyes of the world to the possibility of nuclear war and its consequences and in doing so he also reduced the risk of a future nuclear confrontation as many safeguards were put in place including a "hotline" from Washington to Moscow.

His work was done though, his legacy was to break the grip of fear that silenced the people during Stalins regime, he was a reformist that opened up the arts albeit only until comrade Brezhnev reversed this policy. He was the beady eyed down to earth peasant whose farm yard humour he delivered with the political theatrics of a blunt statesman, he could summon cunning, guile and strength as required for the situation he was facing. But ultimately he was a pragmatist who despite having the hawks of the Kremlin to contend with, recognised the futility of a nuclear war and timed his decisiveness with aplomb during the biggest crisis of the 20th century.

The former U.S. ambassador to Moscow William Averell Harriman recognised that he knew what was at stake: "He was willing to compete with the U.S. in world domination but ready to back down to avoid a nuclear war. Khrushchev saw the determination in Kennedy so he backed down"

The Shah of Iran Mohammad Reza Pahlavi spoke of both sides of his personality by saying: "Nikita Khruschev was a difficult man to deal with, often very hard, always determined. But his peasant side which made him alternatively good-natured and cunning, also made him likeable"

The journalist John Charles Daly summed up his bluntness by simply saying: "He's a charming fellow between sentences"

Former U.S. President Richard Nixon felt he had the measure of the man when he stated: "Khrushchev would respect only those who stood up to him, who resisted him, and who believed as strongly in their own cause as he believed in his"

The British politician Alec Douglas-Home was less than impressed: "Until I had talked to Mr. Khrushchev on the subject of Colonies and Commonwealth I had no idea how completely closed and prejudiced the human mind can be"

President Eisenhower tempted fate and the storm duly arrived when the Soviets shot down an American U2 spy plane in 1959 which doomed the Paris disarmament talks with Khrushkev: "Well, boys, I believe the country needs this information, and I'm going to approve it. But I tell you one thing. Some days one of these machines is going to be caught and we're going to have a storm"

With reference to the U2 incident, the British Prime Minister Harold Macmillan thought Eisenhower: "should have made the right statement at the right time to let Khrushchev off the hook, it was such a childish thing"

In a tense meeting with Khrushkhev over the Sino-Indian border clash in 1959 Mao Zedong accused the Soviet leader of abandoning Communism when he said: "We have attached to you one label - timeservers" 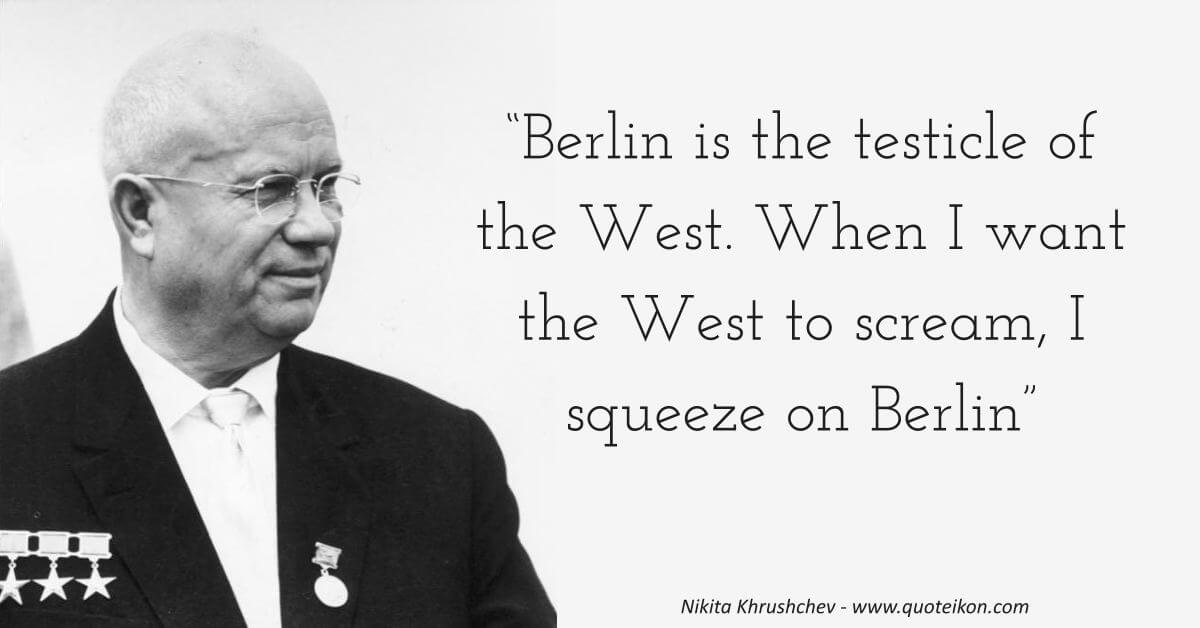