He was a doctor by profession but the fires of revolution burned in his heart. He earned a fearsome reputation as a freedom fighter that gave no quarter. He was Fidel Castro's closest confidante and an important part of the Cuban revolution. His name is Che Guevara, the immortalised iconic symbol of rebellion against repression.

From an early age he showed his disgust in the political machinations that oppressed South Americans mostly at the behest of the mutually complicit U.S.A. A motorcycle journey through Latin America in the early 1950's would turn out to be a life changing experience for the young medical student who was taking a break from his studies to travel.

It was to be an epic journey. He was met with the recurring theme of poverty, starvation and disease throughout his travels in Argentina, Chile, Peru, Ecuador, Colombia, Venezuela and Panama. Che witnessed helpless parents unable to treat sick children due to lack of money and just accepting the childs fate is to die. He was disgusted by the exploitive working conditions for miners in Chile and the persecution of any left leaning socialists who tried to help. The ostracization of the sick and needy was disturbing for the young physician in training. He grew frustrated by the neglect and he realised the only way to help these people was not through his medical training but through political means and armed struggle if necessary.

Che Guevara published a best selling book called "The Motorcycle Diaries" covering his sojourn through the heart of The Andes and beyond. He finished the book with a message of defiance declaring that he would devote his life to fighting for the poor and oppressed people of South America. He went further by saying he had a vision for a united Latin America that would be borderless and classless. For this noble cause, Che Guevara stated unequivocally he was prepared to sacrifice his life for the cause of liberation and equity for all the people.

Capitalist exploitation became his enemy and Che first got a taste of activism when he joined the political unrest in Guatemala. He actively supported the land reforms under President Jacobo Árbenz who was redistributing all uncultivated portions of land to peasants who previously owned no land. The largest land owner, who would be most affected, was an American corporation called the United Fruit Company. This initiated alarm bells in Washington who were unhappy with the Guatemalan President. The CIA began covert operations and a major propaganda campaign against Árbenz.

The end result was a CIA sponsored coup d'état led by a military officer called Castillo Armas. He also happened to be a member of the right wing National Liberation Movement and with Jacobo Árbenz removed from power he became the 28th President of Guatemala. The American corporation kept their land, the peasants continued to suffer and starve while the outrage of the injustice enraged Che Guevara whose Marxist thinking was solidifying in the mind of a budding revolutionary.

Guatemala was the last straw for Che. He became convinced the only way to defeat imperialism was through armed struggle. Guevara left for Mexico where he met some Cuban exiles who were impressed by his passion and arranged a meeting for Che with the heads of the "26th of July Movement" Fidel Castro and his brother Raul.

The planned meeting with the Castros was in Mexico City and Guevara was sold on the idea of liberating Cuba from the corrupt regime who were kept in power by the U.S. Che Guevara joined the Castro led movement and he was to get his first taste of guerilla warfare fighting against the forces of Cuban dictator Fulgencio Batista.

On 25th November 1956, Che and Fidel set sail from Mexico on a yacht called The Granma. Their destination was Cuba. They had a force of 82 men and a date with destiny that would produce some the most tense moments of The Cold War. The U.S. backed Bay Of Pigs invasion and the Cuban Missile Crisis were the future, first there was a revolution to win.

Not long after landing they were confronted by Batista's troops. After the ensuing battle the brave 82 freedom fighters were reduced to 22. With little support and few options they ventured deep into the Sierra Maestra mountains. Most Cubans were sympathetic to Castro's revolutionary aims. They received support from a local leader called Frank País who was head of the urban 26th July Movement.

Whilst living amongst poor peasant farmers Che Guevara discovered most were illiterate, there were no schools so Che started a school. There was no access to healthcare so Che established clinics. He built makeshift factories to make grenades and taught military tactics to the guerillas. He built ovens so the peasants could bake bread and he started a newspaper to spread the word that the coming revolution would improve Cuban's living conditions.

Fidel Castro was so impressed with Guevara that he made him a commander of an army column. Together they successfully fought a guerilla war for two years until Castro led his army unchallenged into Havana and took the reins of power under wild celebrations of the population.

Post revolution the people were happy with the outcome but wanted revenge against former government officials who were responsible for brutal atrocities and the deaths of more than 20,000 people under the tenure of Batista. Castro wanted a steady hand and placed Guevara in charge of the trials and tribunals. Che set up his HQ and a military prison at La Cabaña Fortress in Havana.

Che Guevara recorded 176 executions during his time in command of La Cabaña prison. He ensured revolutionary justice was served as many members of Batista's secret police were summarily executed.

Guevara stayed in Cuba and he lived a humble life as a politician who lived below his means. He wrote books and assisted the people in cultivating an agrarian lifestyle but he was restless, he missed the excitement of the revolution.

He resigned his position in 1965 and headed to the Congo to lead a revolution that lacked support so was doomed to failure. From here he went to Bolivia and walked into another unsupported revolution that saw him hunted down by U.S. trained Bolivian soldiers. He was wounded in the gunfight and just two days after his capture the order came through to execute Che Guevara and his captured comrades.

When the Bolivian President René Barrientos found out Che had been captured alive he was in a political quandary about what to do next. There were no maximum security prisons in Bolivia so there was a high possibility he would escape. He also did not want the drama of a public trial with an army of the world's press in attendance to hear the eloquent Che Guevara expose corruption and the exploitation of the poor. He made the decision to execute Che and the army unit that had captured him carried out the order.

The U.S. then scored a political own goal by publicising images of Che's body that inspired the worldwide legend of the revolutionary who was cut down by oppressive capitalists.

Candle lit vigils were held around the world for Che Guevara. Wherever a demonstration or a riot occurred there would be a legion of people wearing T-shirts emblazoned with the image of Che Guevara.

It was the Cuban photographer Alberto Korda who took that epic photo of Che Guevara during a 1959 Fidel Castro speech in Havana. This photograph has become one of the most iconic images of the twentieth century. From Palestine to Pakistan or Vietnam to Venezuela, it matters not the dispute because the image of Che Guevara would be present as the silent symbol of rebellion staring back at the repressive stick of capitalist hegemony.

In the end he sold more T-shirts than he inspired successful revolutions. The irony of the story is the capitalists then cashed in on his image and the revolution was sold to the counter-culturists in the markets of the world. Che Guevara is probably turning in his Mausoleum at the thought of his monied image being sold for profit.

Still at least Che would be happy he is remembered for many of his memorable quotes, so above is my compilation of 21 of the best Che Guevara quotes.

Fidel Castro was moved to say about his revolutionary comrade: "Che sowed the seeds of social conscience in Latin America and the world, he was a flower prematurely cut from its stem"

Activist turned world leader Nelson Mandela was inspired to say: "We also honour the great Che Guevara, whose revolutionary exploits, including on our own continent, were too powerful for any prison censors to hide from us. The life of Che is an inspiration to all human beings who cherish freedom. We will always honour his memory"

The CIA agent Philip Agee admitted this: "There was no person more feared by the company (CIA) than Che Guevara because he had the capacity and charisma necessary to direct the struggle against the political repression of the traditional hierarchies in power in the countries of Latin America"

The former Cuban freedom fighter called Urbano reflected on his personal Che Guavara legacy: "He taught me to think - he taught me the most beautiful thing which is to be human"

The journalist Marilyn Zeitlin was in awe of him: "He had eyes that seemed to go through you. I’ve interviewed all sorts of famous people, from Ben Gurion to Bob Dylan, but no one has ever made an impression on me like Che did. There was something Christ-like about him. I really felt that when he was talking to me, he was telling the truth" 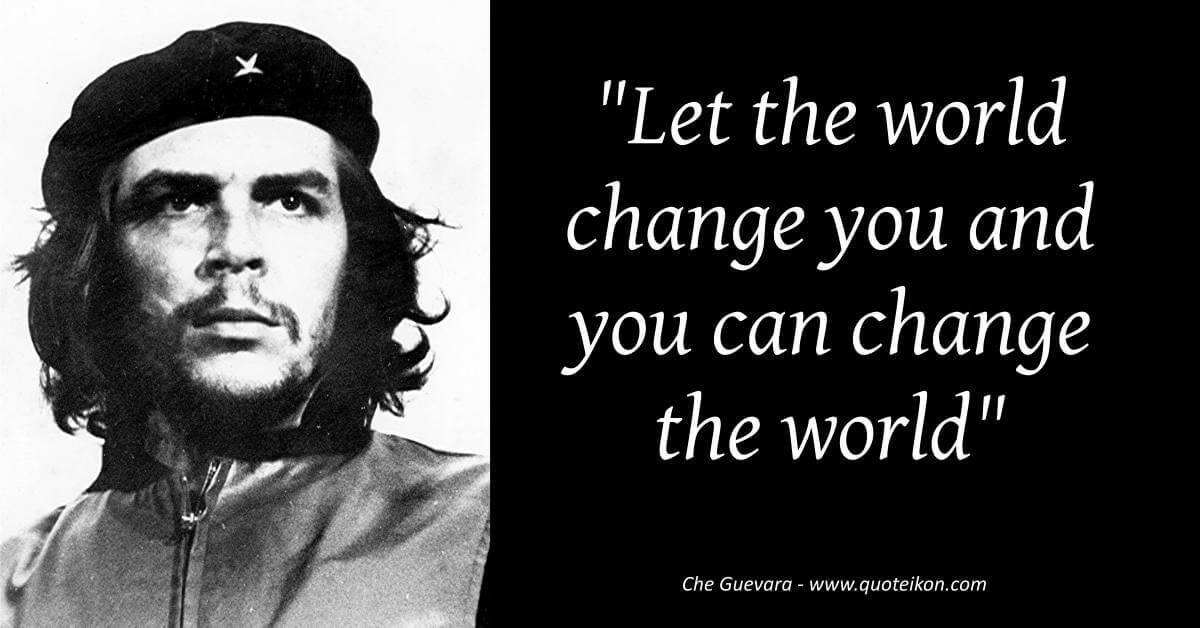