The Legacy of Robert Burns

Back in the day, many so called wiser literary critics encouraged Burns to bathe in his mastery of the English language and use this to broaden his audience. Burns resisted, he opted to strengthen his embrace of the colloquial tongue which gave his verse an authentic feel of the rustic glen.

His commitment to poetry in the Scottish dialect limited his success during his lifetime but gifted him the appreciative ears of generations of Scottish people eager to embrace their cultural heritage. The greater Scottish diaspora carry an enduring sense of identity that transcends generations and becomes an important part of the family persona.

To search for the Scottish identity invariably leads to Robert Burns. His statue stands proud in cities spanning the globe from Tallinn to Toronto and Dundee to Detroit. His image has appeared on stamps and banknotes whilst his name has even been given to a crater on the planet Mercury.

Burns night, on 25th January, has become a worldwide institution whereby more than nine million people annually partake in poetry recitals during the Burns supper which consists of the traditional Scottish fayre of haggis, mashed turnips and potatoes.

The bard of Ayrshire has faced many posthumous attacks on both his work and his character. His poetry stands its ground as staunchly as The Bruce did at the Battle of Bannockburn.

His character? He was a poet, no more and no less than the bed hopping Lord Byron who was labelled as mad, bad and dangerous to know; or Percy Bysshe Shelley whose trail of destruction saw him notoriously tagged as mad Shelley; or Alexander Pushkin who fought 28 duels, mostly over women, but the 29th duel witnessed his untimely demise; or Charles Baudelaire who did not have to wait centuries for a woke character assassination as the French authorities banned his 1857 poems Les Fleurs du Mal and charged him with offences against public decency.

It took 100 years for Baudelaire's work to be removed from the banned list so he could retake his place in the canon of French poets. Hopefully the Scots do not bend to any woke agenda disparaging this Scottish National Treasure to satisfy some petulant egos

The U.S. President, Abraham Lincoln, spoke of learning the qualities of human compassion from Burns: "From Shakespeare I learnt the sonnets. From the bible, the scriptures. But it was from that man I learnt humanity"

Lincoln's secretary John Hay once had to inform an inquisitive senator who did not understand a presidential recital of Burns: "The President adores the Scotchman who wrote it. He reads him constantly and recites him every evening. He says he would not be the man he was, would not have won the war, indeed would not have been President, had it not been for Robert Burns"

Lincoln went on to say: "Now we have won this great war, I must make good on my promise to go to Scotland and pay homage to the man without whom everything would be different. Tomorrow you must book my passage" The ticket was booked, but, a few days later, the trigger of John Wilkes Booth's gun put paid to Lincoln's dream of walking in the footsteps of Scottish poetic greatness

The writer Alec Ross shared this thoughtful appraisal: "Here was a man destined to reach for the sky with his feet forever in Ayrshire clay. Here was a man who, despite possessing a once in a generation mind, was bound through class and through prejudice and through circumstance to walk through the valley of compromise; a man tortured by the knowledge that his background would never allow him to become the person he instinctively knew himself to be"

The literary critic William Hazlitt shared this comparison: "Burns was not like Shakespeare in the range of his genius; but there is something of the same magnanimity, directness, and unaffected character about him"

The poet Fitzroy-Greene Halleck was inspired to verse: "And Burns, though brief the race he ran, though rough and dark the path he trod, lived, died, in form and soul a man, the image of his God"

The verse of Fitzroy-Greene went on to describe Burns thus: "He kept his honesty and truth, his independent tongue and pen, and moved, in manhood as in youth, pride of his fellow-men"

Fitzroy Greene concluded the poem with a verse the ploughman poet would be proud of: "But what to them the sculptor’s art, his funeral columns, wreaths, and urns? Wear they not graven on the heart the name of Robert Burns?"

Ralph Waldo Emerson shared this insight: "Burns knew how to take from fairs and gypsies, blacksmiths and drovers, the speech of the market and street, and clothe it with melody"

His teacher, John Murdoch talked of his academic progress: "My pupil, Robert Burns, was then between six and seven years of age ... (he) and his younger brother Gilbert had been grounded a little in English before they were put under my care. They both made a rapid progress in reading, and a tolerable progress in writing. In reading, dividing words into syllables, spelling without book, parsing sentences, etc., Robert and Gilbert were generally at the upper end of the class, even when ranged with boys by far their seniors"

Murdoch went onto say: "Gilbert always appeared to me to possess a more lively imagination, and to be more of a wit, than Robert. I attempted to teach them a little church-music. Here they were left far behind by all the rest of the school. Robert's ear, in particular, was remarkably dull, and his voice untunable. It was long before I could get them to distinguish one tune from another. Robert's countenance was generally grave and expressive of a serious, contemplative and thoughtful mind"

Years later, Murdoch wrote in a letter to Burns: "If ever you come hither, you will have the satisfaction of seeing your poems relished by the Caledonians in London full as much as they can be by those of Edinburgh. We frequently repeat some of your verses in our Caledonian Society, and you may believe I am not a little vain that I have had some share in cultivating such a genius"

The scholar Karyn Wilson-Costa shared this view: "Robert Burns was above all a poet of sentiment but there was too much force and energy in him for him to tarry too long in thoughtful sadness. The antidote lay in love and poetry"

The Scottish actor James Cosmo walked in his footsteps to an enlightened understanding: "I’ve always been passionate about Burns and consider myself to be knowledgeable about the writer, but it’s only after travelling across our beautiful country to the places which inspired him to write that I now feel I understand the man who became Scotland’s literary hero"

The actor Sean Connery had this to say about his fellow Scot: "Robert Burns is one of the world’s greatest songwriters. Bard. Bawd. A poet’s poet. A poet for all seasons. But are we up to the essential genius of the man? For genius he was"

The celebrated writer D. H. Lawrence shared this view: "My word you can’t know Burns unless you can hate the Lockharts and all the estimable bourgeois and upper classes as he really did – the narrow gutted pigeons. Don’t for God’s sake be mealy-mouthed like them. I’d like to write a Burns life. Oh, why doesn’t Burns come to life again and really salt them"

The poet Don Paterson shared this assessment: "Burns' central insight is that the spiritual, the social, the sexual, the natural, the political and the humorous are overlapping human realms, not separate or competing ones"

The TV presenter Jeremy Paxman plumbed the depths of controversial critique with this comment: "I'm afraid I find the Scottish national poet no more than a king of sentimental doggerel"

The poet Morag Anderson was less than impressed: "I struggle to understand the ongoing appetite for Robert Burns - he is more myth than man"

Anderson went further by stating: "I would like Scotland to remove the tartan blinkers and take an honest look at Robert Burns: celebrate that which is worthy of celebration but attend to the misogyny and abuse which is rife throughout his work"

The journalist Katrina Patrick displayed a more positive appreciation: "Burns possesses the spirit as well as the fancy of a poet"

The scholar Allen Packwood revealed that Winston Churchill was an admirer: "In his speech accepting freedom of the city of Edinburgh in 1942, he quoted Robert Burns"

Janette Ayachi shared this observation: "I love the fact that Scotland is the only country in the world that annually holds a holiday to pay homage to a poet, a festivity that also carries to other continents. I wish that never, ever ceases to circle"

The poet Edwin Muir once observed that Burns is: "to the respectable, a decent man; to the Rabelaisian, bawdy; to the sentimentalist, sentimental; to the socialist, a revolutionary; to the nationalist, a patriot; to the religious, pious"

The author Yann Tholoniat described him thus: "Robert Burns is no less than a visionary. Before Wordsworth, and with a more combative tone"

The writer Andrew O'Hagan expressed this view: "Robert Burns was in no way a simple nationalist and a wild patriot - he died in the employ of the British Excise - but his work nevertheless captures the essence of Scottish working folk on the brink of the industrial revolution"

The poet Walt Whitman made this comparison: "Burns has been applauded for our purposes as democratic, and with some warrant; while Shakespeare, and with the greatest warrant, has been called monarchical or aristocratic"

The author Gerard Carruthers spoke of his legacy: "Burns speaks strongly to people through his words which still have resonance right up to today, not just in Scotland" 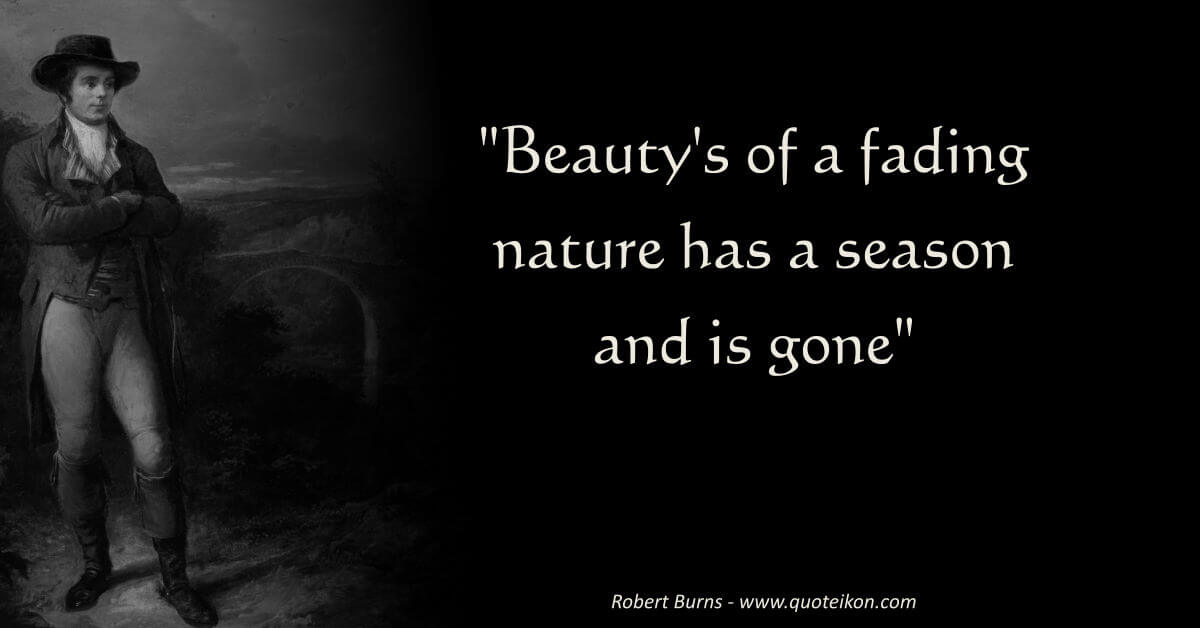